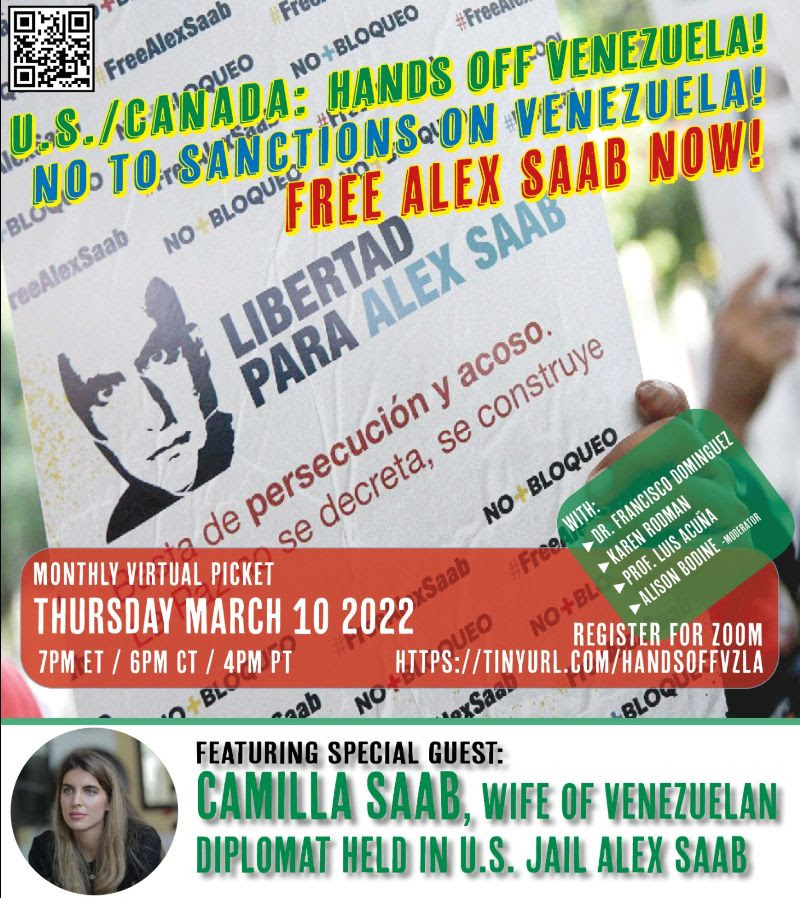 >>> Featuring Special Guest: CAMILLA SAAB, wife of Venezuelan diplomat, Alex Saab who is currently in jail in the United States. Camilla will be speaking direct from Venezuela with important updates about his case.

Dr. FRANCISCO DOMINGUEZ, head of the Research Group on Latin America at Middlesex University, national secretary of the Venezuela Solidarity Campaign in the U.K. ,which is currently leading a campaign for the release of Venezuelan gold being held by the Bank of England.

+ Greetings from Professor LUIS ACUÑA, Charge d’affaires of the Venezuela Embassy in Canada speaking from Venezuela

Chaired by ALISON BODINE Coordinator of the Fire This Time Movement for Social Justice Venezuela Solidarity Campaign and author of “Revolution and Counter-Revolution in Venezuela.” (Battle of Ideas Press, 2018)

On March 3, 2022, the U.S. President Joe Biden renewed the 2015 executive order declaring Venezuela an “extraordinary threat to the national security and foreign policy of the United States”. This hostile move by the U.S. against Venezuela is used by the U.S. government to facilitate their ongoing cruel and inhuman sanctions and blockade against Venezuela. The U.S./Canada/EU sanctions deny people in Venezuela access to foods, medicines, and basic goods.

The persecution of Venezuela diplomat, Alex Saab is another cruel arm of the U.S. blockade on Venezuela. Alex was arrested while in Cape Verde en route to Iran to negotiate shipments of fuel and humanitarian supplies for Venezuela.  In October 2021 Alex Saab was kidnapped by the United States and is being held in jail. His next court hearing is on April 6, the court will hear arguments in Alex Saab’s appeal to be recognized as a Venezuelan diplomat

Online picket action to hear important updates about the case of Alex Saab, directly from Camilla Saab, who is leading the campaign for his freedom in Venezuela. This picket will also share perspectives from organizers in solidarity with Venezuela from the U.S., Canada and the U.K.

>> Organized by Venezuela Peace Committee in Winnipeg and the Fire This Time Movement for Social Justice Venezuela Solidarity Campaign, and Just Peace Advocates with the support of Venezuela solidarity organizations and individuals across Canada.

It is my pleasure to be able to join you this evening.

Congratulations to Alison and Fire This Time Movement for Social Justice for your steadfastness of keeping up the steady beat of this monthly picket.

Just Peace Advocates while focused on Palestine and Kashmir also joins with partner organizations in anti-imperial work including regarding Venezuela.

In November, John Philpot, a board member of Just Peace Advocates travelled to Venezuela to observe the elections.  As you have heard from others, the team of over 300 observers were very satisfied with the process. The delegation also remained a few extra days to consider food sovereignty, and to meet with Camilla to discuss strengthening the campaign for Alex Saab’s liberation.

In October, when Alex Saab was extradited by the USA from Cabo Verde, Just Peace Advocates made an urgent call that a dozen Canadian organizations, and several international organizations along with individuals signed.

It was to Prime Minister Trudeau and Canada’s Ambassador to the USA Kirsten Hillman calling on Canada to demand that the USA Biden administration release Saab immediately to Venezuela to receive medical treatment.

The call indicated that:

– Undertake and apply a review of Canadian foreign policy with respect to UN Charter principles regarding multilateralism and the sovereign equality of nations; and

– to abrogate all unilateral coercive measures adopted outside the UN Security Council. This would involve a specific review of Canada’s Special Economics Measures Act.

Meanwhile as Alex Saab was extradited to the US, the International Criminal Court Prosecutor, Karim Khan was on his way to Caracas where, he announced on November 3, that the ICC had opened an investigation into the what the ICC references as the “situation in Venezuela.”

The “situation” had been under preliminary examination by the Office of the ICC Prosecutor since February 2018. This was before Maduro was elected in May 2018

Then in September 2018, six ICC member countries asked the ICC prosecutor to investigate potential crimes in Venezuela. This was the first-time that countries had jointly asked the prosecutor to investigate crimes alleged to have been committed on the territory of another ICC member country. This process let the prosecutor open an investigation without first seeking approval by ICC judges. The six governments included: Argentina, Chile, Colombia, Paraguay, and Peru, and yes, Canada. Canada was early off the mark with announcing this through then Global Affairs Canada Minister Freeland on September 26, 2018 saying

“Canada commends the diligent work and findings of the Panel of Independent International Experts, appointed by Secretary General of the Organization of American States, particularly the findings concerning crimes against humanity in Venezuela.

But let’s back up a bit—so even before the election of Maduro on May 20, 2018, steps were already being taken to move forward to make this filing to the ICC.   In fact, in a press release from then Canadian Foreign Minister Freeland on May 29, 2018, reference was made to a report indicating crimes against humanity that could contribute to a future ICC case.

A year earlier on September 15, 2017, even as the newly created Lima group was just forming, the Organization of American States (OAS) put a committee together to investigate possible war crimes against humanity in Venezuela. Minister Freeland welcomed the appointment of Canadian Irwin Cotler to the Organization of American States (OAS) Panel of Independent International Experts to  examine evidence collected on possible crimes against humanity committed in Venezuela. This of course was the “work” that Minister Freeland later referenced when announcing the ICC case in Sept. 2018.

My review of statements by the Lima group in the intervening period as well as other statement made by Canada showed that work was underway to develop the narrative that could lead to allegations of crimes against humanity.

The very comprehensive statement by the Lima group on January 4, 2019 urging Maduro to not accept office specifically also stated that given “the possible commission of crimes against humanity in Venezuela, we encourage other countries to support the [ICC] submission, and urge the Office of the Prosecutor of the International Criminal Court to proceed expeditiously with the corresponding procedures.”

At the February 4, 2019, Lima meeting in Ottawa Prime Minister Trudeau declared, “the international community must immediately unite behind the interim president.” The post Lima Group “Ottawa Declaration” called on Venezuela’s armed forces “to demonstrate their loyalty to the interim president” by removing the elected president.

A review of the statements from 2017 to 2020 made by the Canadian government and the Lima group would make one think both were coming from the same Global Affairs communication officials each building on each other.

Then in 2021 the Lima group lost “Lima” when Peru’s Foreign Affairs Minister said “the Lima Group must be the most disastrous thing we have done in international politics in the history of Perú.” But the dominant Canadian media has as Yves Engler said, “all but ignored the collapse of Canada’s unprecedented bid to create an international coalition to support a parallel Venezuelan government.” Now over three years since Guaidó declared himself president of Venezuela the Canadian government continues

with this narrative but without the barrage of press statements– but of course the wheels were already in motion for the ICC case and with sanctions secured through the Canadian Special Emergency Measures Act. The work of the made in Canada Lima group was done.

Meanwhile while Canada worked overtime to get the ICC to open this case against Venezuela, Canada has denounced the ICC case brought by Palestine against Israel, saying Palestine is not recognized as a state by Canada so the ICC does not have jurisdiction. Recently Canada has said they reject the Amnesty International report about Israeli apartheid, with a Canadian diplomat saying apartheid is a legal term and needs to be proven in court, but of course Canada does not support Palestine’s case being heard at the ICC! So just how that should happen seems obscure!

The hypocrisy while not surprising still leaves ones a bit dizzy.

Just Peace Advocates is pleased to be able to stand as an ally towards justice for Venezuela, Kashmir, Palestine and other anti-imperialist work….and there is certainly much work to do. We are thankful for partners that we can work across Canada and Quebec.

And we call for