1972, the year the pro-Israel lobby realized it had to shut down the United Church’s work on Palestine 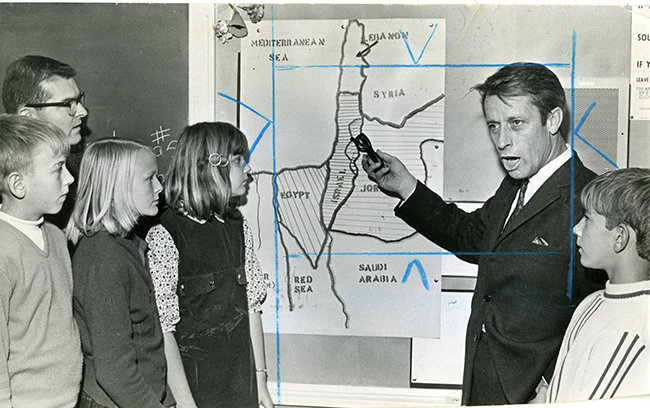 After five years of intense focus on the United Church of Canada, and in particular Rev. Dr. A.C. Forrest, the pro-Israel lobby realized that the resolutions passed at the United Church General Council the year before in 1971, along with the strong resolutions at the Saskatoon General Conference in August 1972, meant that there needed to be a very strong intervention.

The archives are filled with documents that detail the steps taken to try to shut down the grassroots Palestine movement of the United Church over the years from 1967 to 1972.

Following the 1971 United General Council, the United Church’s committee on international affairs had asked the Canadian secretary of state for external affairs to report on Israeli bonds, including the amount, the mechanism used to transfer them from the country, tax exemptions and charitable status. This along with several other Palestine items were passed at the United Church General Council meeting in 1972.

What was particularly concerning to the pro-Israel lobby was that the1972 General Council resolution included calling for a meeting with Prime Minister P.E. Trudeau to discuss these items.

In those days, the United Church of Canada could have pretty easily gotten an audience with the Prime Minister.

But the meeting did not happen due to caving to pressures by the pro-Israel lobby. Based on information in the United Church Archives, a lot of effort was put into stalling this meeting with Trudeau, as well as any action on the approved resolutions. Other records show that assurances were made by the new Moderator Bruce McLeod and the General Secretary, George Morrision, to several of the pro-Israel leadership, that while the resolutions could not be reversed, they could make sure they did not get implemented.

The sending of this letter was stalled while the United Church was in backroom dialogue with B’nai Brith and others from the pro-israel lobby of the time, as they wrestled on the cooperation agreement in an attempt to get B’nai Brith to drop its law suits against the United Church.

People who had brought the motions forward in Saskatoon questioned why the letter to the Prime Minister was not moving forward.

Then after the May 1973 signing of the cooperation agreement between B’nai Brith and the United Church of Canada, the draft letter was finalized in early June 1973.

The Committee of International Affairs of the United Church of Canada wrote the letter, but it was provided to the pro-Israel lobby by the Canadian Council of Churches. In fairness, the United Church had reached out to other denominations and included their policy in the letter. Regardless, the pro-Israel lobby saw through it, and could see that the letter included reference to the United Church Saskatoon General Council resolutions. The pro-Israel leadership had been given reassurances that these resolutions would not be implemented, and felt duped that the church would send their letter through the Canadian Council of Churches. In the end, the letter was never sent to the Prime Minister.

The United Church archives show people trying for quite some time to figure out why the letter had not moved forward, trying to figure out why it had gone to the Canadian Council of Churches and how they could get it sent.

This is the draft of the letter that had been sent by the Canadian Council of Churches to the National Joint Community Relations of the Canadian Jewish Congress and B’nai Brith in late June 1973. Indication by Mr. Kayfetz to Rabbi Plaut was this provided a dilemma as it was expected the focus on the discussion with the Prime Minister and Cabinet would be on the United Church resolutions.

The draft did not include reference to the Israeli bonds, but did include reference to the $100 Million loan to Israel from the Export Development Coorporation, and referenced the United Nations Human Right Commissions concerns about Israel’s administration of the occupied Palestinian territory. Also, the letter mentioned the problematic voting record on United Nations resolutions by Canada.

The beginning of the cooperation with the pro-Israel lobby was underway.

General Council 27 in 1977 approved a resolution that aligned with the United Nations General Assembly Resolution 3379 (1974) that zionism is racism. The General Council also indicated that the church insist the Canadian government external affairs support the Palestinian people in being represented by the Palestinian Liberation Organization (PLO). This resolution seemed to be completely ignored by the United Church.

The United Church went quiet about Palestine for for pretty much 25 years, but then in 2003, General Council 38 gave its blessing to a Jewish state, while it called for recognition by Israel and Palestine that all citizens have equal rights, protections, privileges and responsibilities for all their respective citizens regardless of religious or national origin. No doubt that one was to help to appease the Canadian Jewish Congress who had pulled away from the Canadian Christian Jewish Dialogue in 2002.

Then in 2006 ethical investment resolutions were brought forward to General Council. A huge amount of effort was made to provide the pro Israel perspective with specific mailing of large amounts of material being sent to each of the around 300 delegates. When Canadian Friends of Sabeel asked that their information be included, they were told this was not possible, but if they wished they could have an observer present. They were told they could not participate in any way in the presentations. In 2009, ethical investment resolutions came forward again, but this time, trying desperately to mitigate them the United Church passed a resolution asking Palestine to recognize Israel as a Jewish state.

Then in 2012, a comprehensive package of resolutions was brought forward, but it spoke against BDS, refused to name apartheid, and negated right of return by indicating the support only if it did not impact Israel’s Jewish demographic integrity.

In 2015, members of the United Network for Peace and Justice in Palestine and Israel worked to get a resolution passed that would ask the church to implement its 2012 commitments for a boycott settlement, and firm up divestment policy. This did pass, but like in 2012, it was not implemented, with the exception of some minor labeling goods from settlements. Even the minor settlement boycott that had been implemented after 2012, faded away, and no report has been provided on why the United Church General Council, Foundation or Pension plans funds were not divested.

It is said the United Church leads the way in Canada on Palestine, but can you imagine for just a moment, if the resolutions from 1972 had been implemented, and the work continued?

Read details of the United Church General Council resolutions since 1948.

Check out how the United Church does not address the call of Christians in Palestine.