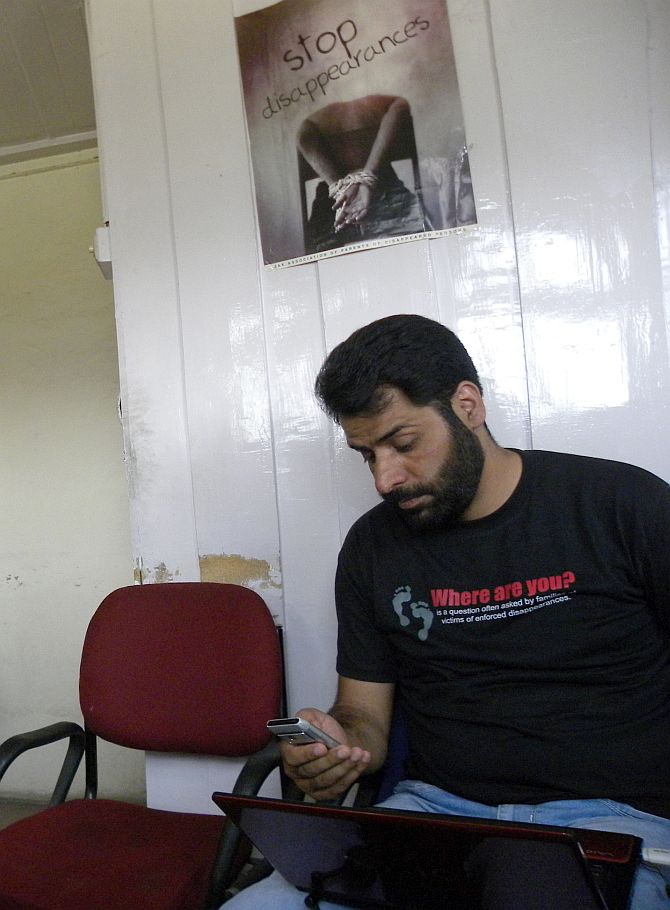 Take a minute to write to Prime Minister Trudeau and Global Affairs Minister Mélanie Joly. Let them know that you demand Canada take action in regard to the arbitrary detention of human rights defender Khurram Parvez.

On November 22, 2021, Khurram Parvez, a leading global human rights defender was arrested at his residence in Srinagar in Indian occupied Kashmir.

This followed a raid at his residence by the National Investigative Agency (NIA), India’s central counter-terrorist task force. The NIA simultaneously carried out a 14-hour raid at the office of the Jammu and Kashmir Coalition of Civil Society where Perez is the program coordinator.

Mr. Parvez was held overnight in custody in Srinagar before being flown to where he remains in custody. Unwarranted detention in facilities outside Kashmir is a common action utilized by Government of India agencies in such situations and is in violation of the Fourth Geneva Convention.

Khurram Parvez and the Jammu Kashmir Coalition of Civil Society (JKCCS) are internationally recognized as model defenders of human rights. As a champion for civil liberties in Kashmir, Parvez has documented the impact of state torture, extrajudicial killings, and other widespread abuses. He has worked closely on regional and international campaigns on landmine removal as well as involuntary and enforced disappearances in the region.

Chairperson of the Asian Federation Against Involuntary Disappearances(AFAD), Parvez received the 2006 Reebok Human Rights Award. Parvez is also a Distinguished Scholar (non­ resident) at the Political Conflict, Gender and People’s Rights Initiative at the Center for Race and Gender at the University of California, Berkeley.

In 2016, he was detained while boarding a plane in Delhi to travel to Geneva to participate in the UN Human Rights Council Session and was held for 76 days under India’s Public Safety Act (PSA) preventive detention legislation. Parvez, age 44, has partial disability, having lost his leg in a landmine blast that hit his car while he was on his way to monitor parliamentary elections in 2004.

The New York Times reported on November 23, “Khurram Parvez’s detention has deepened concerns that the Modi administration is abusing the law to squelch dissent.”

Parvez’s arrest comes within India’s recent crackdown targeting activists, journalists, and political leaders seen as critical of Indian Prime Minister Modi’s government. Over the past few weeks, journalists have been increasingly concerned about harassment and threats of arrest in the context of a longer gradual process of dismantling freedom of the press.

The arrest of Khurram Parvez is being widely reported in international media and strongly condemned by the international human rights community.

The UN Special Rapporteur on human rights defenders Mary Lawlor tweeted her concern about this development on November 22, stating “He’s not a terrorist, he’s a Human Rights Defender.”

The Observatory for the Protection of Human Rights Defenders has strongly condemned the arbitrary detention and judicial harassment of Khurram Parvez and expresses its utmost concern over the high risk of torture and ill-treatment he faces while in custody.

Amnesty International, the World Organization Against Torture, the Indian American Muslim Council, the All India Lawyers Association For Justice and other respected organizations have also issued statements on social media.

In Canada, the BlocQuebecois indicated during the recent federal election that India, by its non-compliance with UN resolutions, deserves to be called to order by the Canadian government and held accountable for its non-compliance with UN resolutions, and that they will not hesitate to submit a motion to the House of Commons to make the Modi government back down and backtrack on all its violations related to Kashmir.

In addition to those Kashmiris who have been languishing in jails for years after expressing their dissent to India’s occupation, an estimated 4,000 to 13,000 Kashmiris have been detained since August 5, 2019. The BQ also has indicated that they always denounce political imprisonment, and they won’t hesitate to do the same for Kashmiris.

It is important that all states committed to the protection of human rights and democracy, and the United Nations, urge Indian authorities to immediately and unconditionally release and drop all charges against Khurram Parvez. It is critical that India end the harassment, intimidation, and persecution of Kashmiri human rights defenders as well as journalists, civil society members, scholars, artists, professionals, and others exercising freedom of speech and expression.

Karen Rodman of Just Peace Advocates says it is critical that “India cease the use of repressive laws to criminalize dissent in Kashmir and that it repeals the Unlawful Activities (Prevention) Act. These actions are critical initial steps towards the goal of resolving the Kashmir dispute through the plebiscite promised by the UN in 1948 and in subsequent resolutions.” She notes that Canada was a key architect of this international commitment with the then Canadian UN ambassador Andrew McNaughton being president of the UNSC Resolution, providing leadership to the creation of UNSC Resolution 47 (1948).