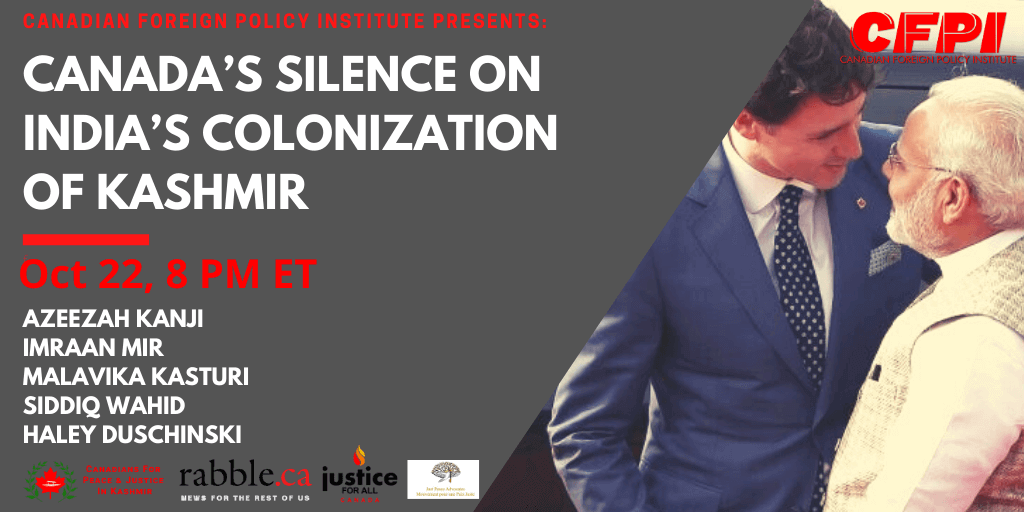 On October 22, Canadian Foreign Policy Institute, Canadians for Peace and Justice in Kashmir, Just Peace Advocates, Justice for all Canada and others are organizing a webinar with a stellar lineup of academics, authors and activists reflecting on “Canada’s Silence on India’s Colonization of Kashmir”. The event will offer an overview of the long-standing conflict, which India’s current Hindu nationalist government has escalated.

Kashmir is one of the world’s longest outstanding international conflicts. Since August 5, 2019, illegally annexed the territory, downgraded its status, and put the Valley of Kashmir under a siege. The world’s most militarized zone is under a serious threat of demographic change that is aimed at altering the final resolution of the disputed territory.

With the introduction of the new Domicile Law by the government of India on March 31, 2020, the project of intentional demographic change, in clear violation of international law, is underway. There is urgency for the international community to intervene as the Indian Government claims it has already issued close to two million Domicile certificates to non Kashmiris, a step that has grave implications for the final resolution of the issue of Kashmir.

This panel will explore the history of the conflict in light of international law; human rights situation and issues of impunity; Hindu nationalism project and the colonization of Kashmir; geopolitical perspectives in light of China’s involvement; and accountability and India foreign policy.

Guests:
Imraan Mir is an attorney, author and entrepreneur. He has researched and written on various topics related to Kashmir and is a co-founder of the Kashmir Law and Justice Project. Focus: Kashmir and international law

Haley Duschinski is an Associate Professor of Anthropology and Director and Graduate Director of the Center for Law, Justice and Culture at Ohio University. Focus: Human Rights, militarization, impunity and the ongoing siege.

Malavika Kasturi is an Associate Professor of South Asian History at the University of Toronto. Focus on Hindu nationalism project, the colonization of Kashmir and the Canada connection

Siddiq Wahid: is Scholar-in-Residence at the Centre for Public Affairs and Critical Theory at Shiv Nadar University. Focus: Geopolitical dimensions and the role of China

Azeezah Kanji is a legal academic and writer. She received her Juris Doctor from University of Toronto’s Faculty of Law, and Masters of Law in Islamic Law at the School of Oriental and African Studies, University of London. Focus on Canada’s accountability.

and co-hosts
Stand with Kashmir

Canadians Against Oppression and Persecution

Hamilton Coalition to Stop the War

Write letter to your elected member of Parliment regarding Canada’s complicity in Indian occupied Kashmir.