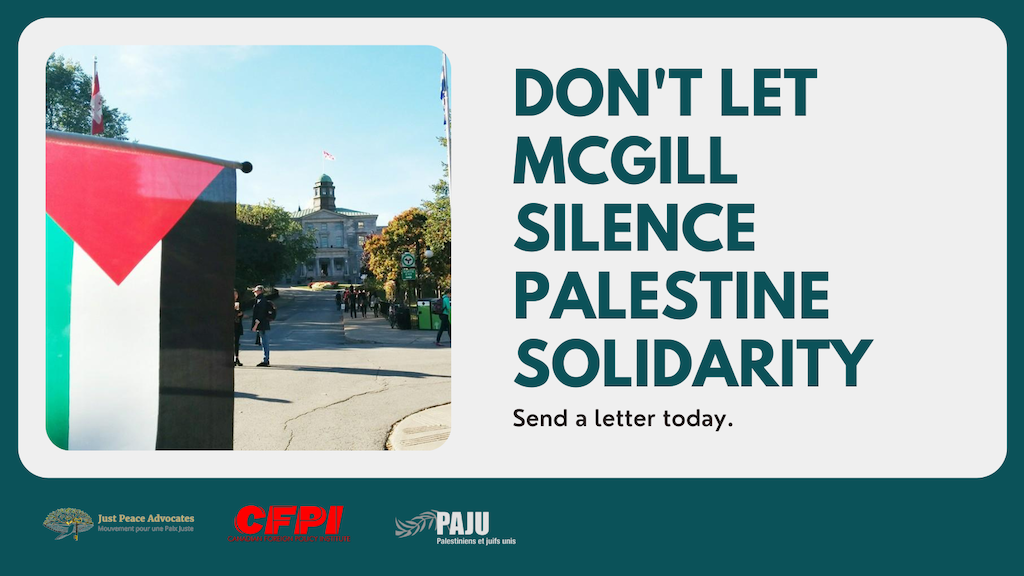 Roger Waters, Richard Falk, John Dugard, Libby Davies, Yann Martel, Chris Hedges, as well as several hundred other academics, artists, lawyers and activists, and many civil society organizations have signed a letter already. Join with them in sending your letter directly to McGill Principal and Vice-Chancellor Suzanne Fortier. See the letter below.

More than 25 universities across Canada have passed BDS oriented resolutions. Over the last few weeks, motions have been passed at five universities including McGill, Concordia, UBC, Simon Fraser and University of Toronto.

Write your own letter HERE

We are alarmed to learn that McGill University has threatened to terminate its Memorandum of Agreement with the Students’ Society of McGill University (SSMU) following students voting to adopt a “Palestine Solidarity Policy”. Your threat is both anti-democratic and anti-Palestinian.

Endorsed by 71% of students in a referendum, the Palestine Solidarity Policy calls for SSMU to divest from and boycott “corporations and institutions complicit in settler-colonial apartheid against Palestinians.” The vote essentially commits SSMU to take a stand against Israel’s system of racial discrimination. The Palestine Solidarity Policy aligns with a growing consensus among human rights researchers, from Amnesty International to Human Rights Watch, B’Tselem to Al-Haq, that have concluded Israel is practicing apartheid against Palestinians. It’s also not dissimilar to measures students promoted in the 1980s – opposed by administrators then – targeting apartheid in South Africa.

In opposing students’ democratic choice, the McGill administration claimed the Palestine Solidarity Policy encourages “a culture of ostracization and disrespect due to students’ identity, religious or political beliefs.” But, the policy does not mention ethnicity or nationality. It only targets institutions complicit in oppression.

In effect, your administration is seeking to silence debate on Palestinian dispossession and block McGill students from protesting Israel’s abuses. McGill students should be commended, not condemned, for pushing their Student Society to uphold its mandate to “commit to demonstrating leadership in matters of human rights and social justice.”

By threatening to terminate the agreements by which SSMU receives its fees, the McGill administration has threatened student democracy and is undermining the Palestinians quest for liberation.

We call on you as Principal and the Administration to not take any action against the SSMU for freely expressing their views democratically.

Boycott from Within (Israeli citizens for BDS)

Coalition against Israeli Apartheid, Victoria, BC

Justice For All Canada, Toronto

The Australian Friends of Palestine Association