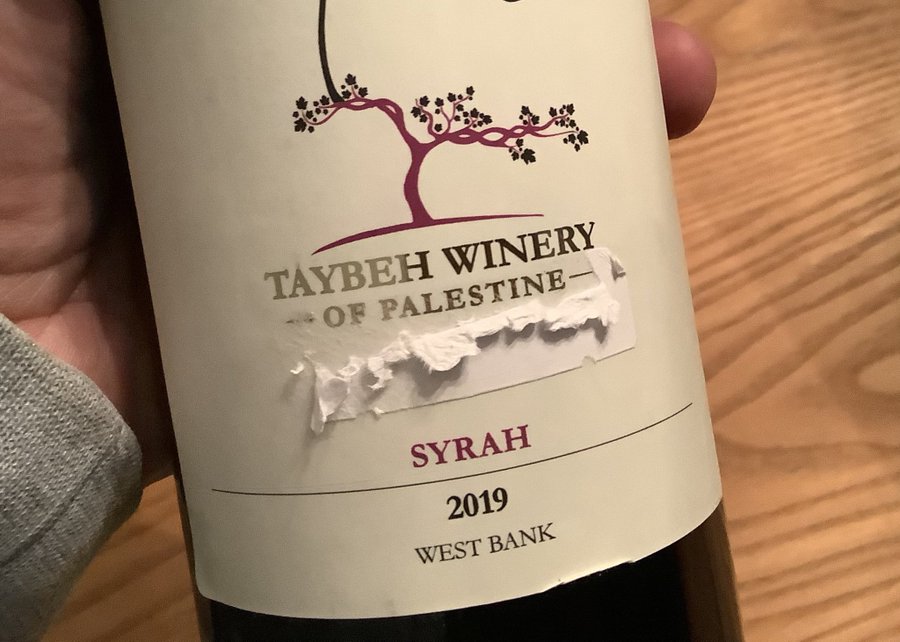 Karen Rodman was pleased to present at the World Social Forum on “Best Business Practices of Colonialism: Case Study Palestine” in regard to the Taybeh wine and beer imports to Canada.

Marhaban. Thanks for including me.

I am glad to see Samer Abelnour is with us. It really was his recent tweet calling out the Ontario liquor board for covering up “Palestine” with a sticker that led to this being included in today’s discussion. Let me give you a bit of the backstory.

In 2018, we formed Palestine Just Trade to import quality, distinct products from Palestine to Canada. At the time, less than a million dollars Canadian were being imported from Palestine.

That year, visiting the Khoury family in Taybeh, I learned that they had attempted to import Taybeh to Canada a few times over the previous decade, but had not been able to.

I attempted to find an agent that could represent Taybeh but was told by someone who I knew who had been a high-end vintage wine buyer for the LCBO that the best thing was for me to become an agent and represent Taybeh. Thus, Palestine Just Trade did just that.

In Canada liquor is regulated by provincial agencies, so I got in touch with the ten provincial agencies. I found the best approach would be to apply with the LCBO’s Destination program that buys small orders to introduce consumers to new products from around the world. The program agreed to buy five varieties of Nadim wine by Taybeh and five flavours of Taybeh beer.

In March 2019, as part of the LCBO’s purchase of Taybeh wine & beer under its Destination program, the LCBO approved the labels with “Product of Palestine.”

In late July 2019 after the Taybeh products had arrived and were ready to be released, the LCBO abruptly put them on hold.

At that time, the LCBO informed Palestine Just Trade that “due to the recent decision by the Federal Court regarding labeling requirements for wines from this region, we have placed these products on hold.”

The court case was referring to a judicial review filed against the Canadian Food Inspection Agency (or CFIA) regarding labeling of two products from settlements in the West Bank. These two settlement products were as far as I could determine already pulled from all provinces liquor boards prior to the court case even proceeding. the successful ruling in late July 2019 required labeling that made it clear that products were from Israeli settlements However, none of the other numerous settlement wines from occupied Palestine and occupied Golan being sold in Ontario or the other provinces were pulled. Sales of the settlement products continued without interruption. Only the Palestinian Taybeh product was put on hold.

A few weeks later in September 2019, the Canadian Attorney General appealed the judicial review on behalf of the Canadian Food Inspection Agency regarding settlement wine labeling.

Letters and calls including from Al-Haq to the LCBO, the Canadian Food Inspection Agency and Global Affairs Canada led to no concrete reasons why the Taybeh was being held or what could be done.

Then in January 2020 after holding the Taybeh products for over seven months, the LCBO said that if stickers saying “West Bank” were placed over “Palestine” on the wine and beer products they could be sold.

Since that time the LCBO Destination program has made two additional purchases of Taybeh’s wine and beer beer. The LCBO has continued to require West Bank on the label. The LCBO asked with the most recent shipment that also a blank sticker also be placed over the word Palestine where it referenced “Taybeh Winery of Palestine.”

Last month, Samer Abdelnour is a Palestinian Canadian ordered a bottle of Nadim wine from the LCBO. Samer is a co-founded Al-Shabaka, a leading Palestinian think-tank. When Samer and his family got ready to enjoy the bottle of Syrah, they noticed the blank sticker and peeled it off to reveal “of Palestine.” Samer tweeted Dear @LCBO— can you please explain this incredibly offensive sticker covering “of Palestine” on the bottle of #Taybeh wine I ordered?

This tweet got lots of attention, and the Canadian Broadcasting Corporation (CBC) ran a story about it on April 22. This story was one of the top stories that day, and interestingly mentioned the word “Palestine” a dozen times. This was very surprising as the CBC in past has consistently censored the word Palestine from even titles such as Joe Sacco’s book called “Palestine” removing the word Palestine in the recorded version of an live interview in the summer of 2020 with Joe so that Palestine was missing as the program broadcast to areas west of Ontario, and the next day the CBC apologized on air for using the word Palestine. Despite a huge outcry, thousands of letters, and ombuds complaints, the CBC stood its ground that the use of the world Palestine did not meet the CBC language standards.

Regarding the Taybeh import, we have filed access requests and still wait for some of those over 30 months later.

The access to information requests we have received show ambiguity about the role of the CFIA, Global Affairs Canada and the LCBO regarding the abrupt change in labeling during the summer of 2019.  It seemed that several complaints were made to the CFIA and that led to the hold perhaps?

Our understanding is the federal government rules requires country or region of origin for wine, but there is no such requirement for beer. However, the beer was still held, and then required product of West Bank as the label. It seems the LCBO, perhaps under direction from the CFIA and/or Global Affairs Canada is saying that since Canada does not consider Palestine to be a state, they will not accept Palestine as a region or country of origin.

Following the CBC article, the Nadim by Taybeh Syrah and other products sold out, although those of legal drinking age in Ontario can purchase Taybeh beer and wine through the LCBO e-commerce channel, and then as they enjoy the product they can of our peel stickers to reveal the word “Palestine.”

In regard to the wine labeling case, the appeal has been referred back to the CFIA to reconsider. Certainly, there are many products selling in at least six Canadian provinces from occupied Golan and Palestine.

Imports from Palestine to Canada remain still low, although have creeped up to about 1.5 million Canadian in the last couple of years, with more medjoul from Palestine arriving in the last several years, along with continued sales of olive oil, and some other minor sales of products like soap, zaatar, and embroidery.

In regard to labeling of products of Palestine, it seems the cork is off the bottle so to speak, and if you uncork a bottle of Nadim by Taybeh you will  find a special surprise– “Palestine” is on the cork even if Canada requires stickers to cover up “Palestine” on the label.

It is honour to be able to join you at the World Social Forum,.

Those in Ontario over legal drinking age of 19 years can order online through the LCBO Destination program to nearest LCBO store or for home delivery.

At present, there are five flavours of Taybeh beer and tvintages of Taybeh by Nadim wine available under the LCBO Destination program.

See more details in the following items from 2019:

Somewhat like the CBC own journalistic standards/language guide, it seems Palestine is a word that is censored.