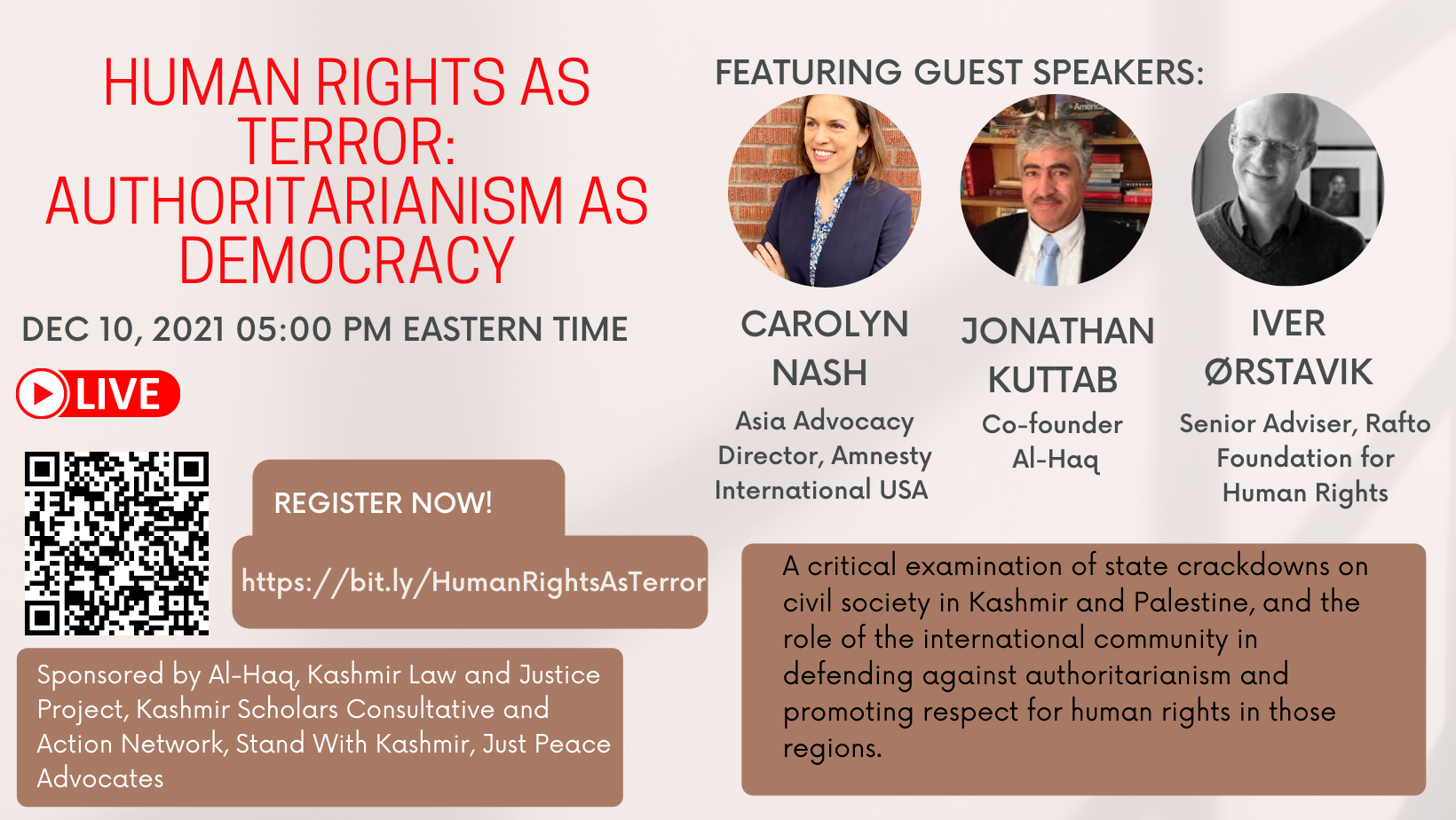 A critical examination of state crackdowns on civil society in Kashmir and Palestine, and the role of the international community in defending against authoritarianism and promoting respect for human rights in those regions.

This event was organized in response to the recent escalated crackdowns in the subject regions, the launching of the US-led “Summit for Democracy” (December 9-10) and Human Rights Day (December 10).

“The arrest of Kashmiri activist Khurram Parvez is yet another example of how anti-terror laws are being misused to criminalize human rights work & stifle dissent in India.” – Amnesty International

Indian authorities arrested Khurram Parvez on November 22, 2021. Parvez is a widely respected human rights defender. For defending human rights, the Indian state has long persecuted him and is now pretextually prosecuting him under counter-terror laws. His most recent arrest represents an escalation of India’s campaign to suppress the democratic and human rights of disfavored groups and ensure impunity for state violations.

Parvez is the Program Coordinator of Jammu Kashmir Coalition of Civil Society (JKCCS) and Chairman of the Asian Federation Against Involuntary Disappearances. He has been a respected global human rights advocate for over two decades, including in India, Jammu and Kashmir, Pakistan, East Timor, the Philippines and Sri Lanka. His documentation and advocacy work has focused on torture, extrajudicial killings, involuntary disappearances and landmine removal. Both he and the organizations he leads have been recognized for their work, including through the Reebok Human Rights Award and the Rafto Prize.

In Jammu and Kashmir, victims generally avoid reporting violations out of fear of reprisals. With the repeated seizure of records from civil society organizations (including JKCCS) and the arrest, assault and intimidation of activists (including Parvez), victims face greater risk of reprisals and less hope for accountability. In Kashmir, where there is no representative governance, no international access, no free speech, no free assembly and no access to justice, both journalism and human rights work are now effectively dead.Parvez’s arrest furthers the Indian state’s broad assault on civil society. As India’s national security adviser recently acknowledged, the Indian state is at war with civil society. Through statutes like the Unlawful Activities Prevention Act, the Indian state has expanded its arsenal of lawless laws in Jammu and Kashmir and ramped up its war against dissenting voices, civil society and marginalized groups.