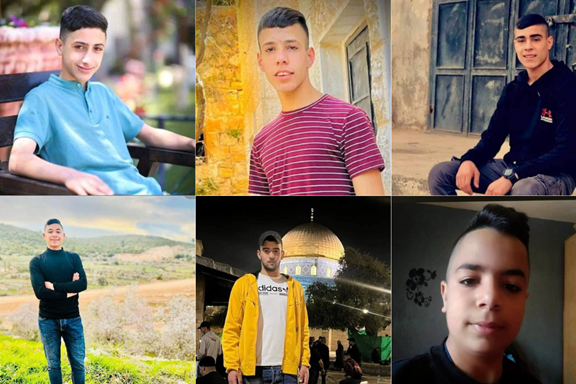 Take one minute to write to Prime Minister Trudeau and all Canadian Members of Parliament.

2022 is showing an increase and acceleration in the death toll.

In recent weeks, the killings have escalated. Using live ammunition, Israeli forces have killed six Palestinian boys, ranging from 12 to 17.

The youngest, a seventh-grader named Mahmoud Samoudi, died on October 10 after Israeli forces shot him in the stomach with live ammunition in late September, tearing through his colon, kidneys, and bladder.

By routinely resorting to intentional lethal force in situations not justified under international law, Israeli forces have created an environment where no Palestinian child is safe.

Since 2000, DCIP has documented over 2200 children killed by Israeli military and settlers.

DCCIP indicated 2021 was the deadliest year for Palestinian children since 2014.

Israeli forces killed 60 children during the military assault on the Gaza Strip, dubbed Operation Guardian of the Walls. During the 11-day operation between May 10 and 21, Israeli forces killed Palestinian children using tank-fired shells, live ammunition, and missiles dropped from weaponized drones and U.S.-sourced warplanes and Apache helicopters.

If you have not already done so, send a letter: Canada Must Tell Israel to Free Palestine’s Child Prisoners — Call on Mme Joly to speak out and take action

In targeting children, Israel is committing a crime against humanity.

Call on the Canadian Government to sanction Israel for this abomination.