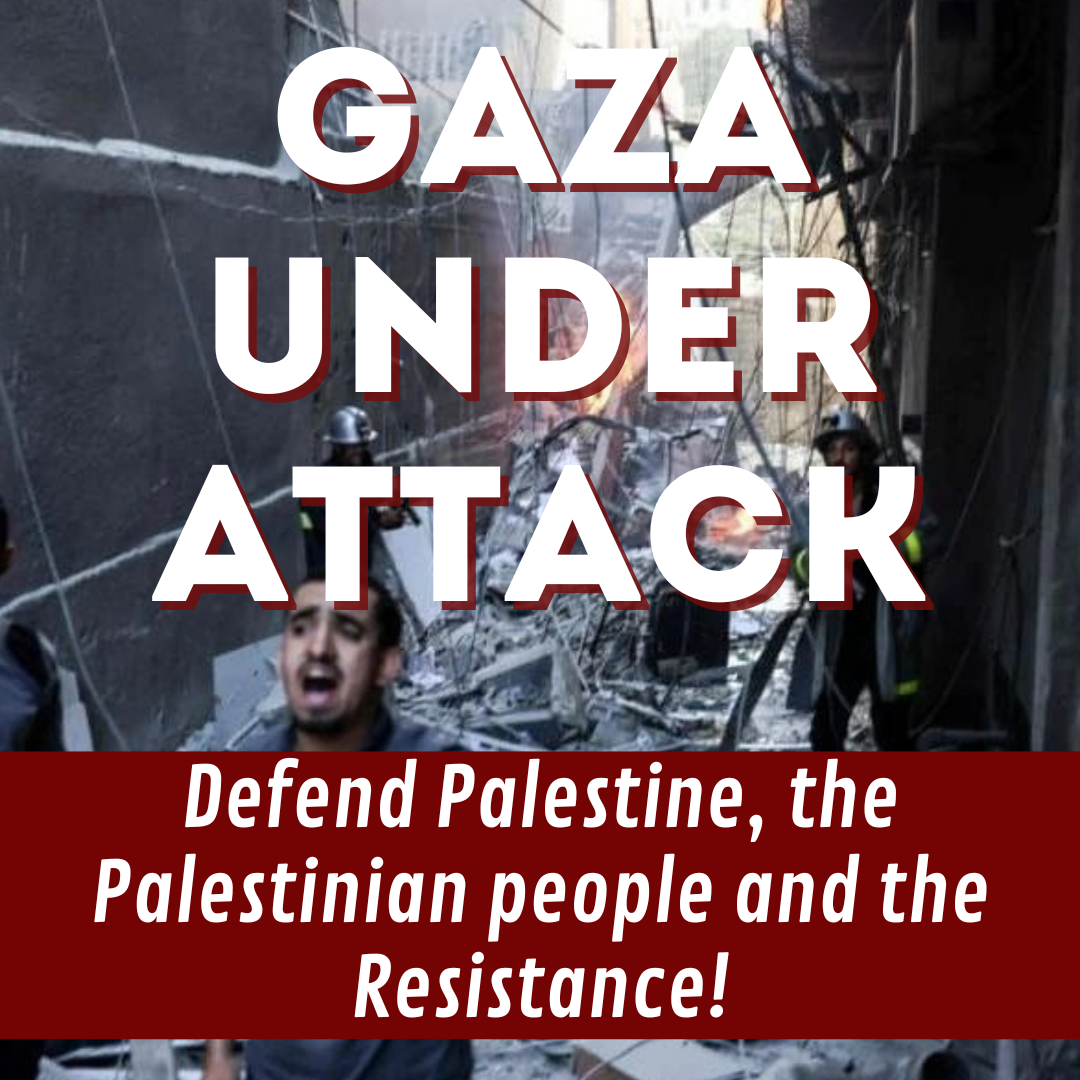 Attack on Gaza: Stand with Palestine, the Palestinian people and their right to Resistance!

On August 5, 2022, Israel launched a military offensive on the Gaza Strip, killing 10 Palestinians including civilians—among them a five-year-old girl and a woman. The Palestinian Ministry of Health indicated 75 were injured, including critical injuries.

Al-Haq has indicated “This is the gravest escalation since Israel’s full scale military offensive on the Gaza Strip in May 2021, killing 240 Palestinians, including 151 civilians.”

In 2014,  Israel’s  military offensive on the Gaza Strip killed 2,192 Palestinians, which included 524 children.  As Al-Haq has indicated this was “ in acts amounting to war crimes and crimes against humanity under investigation by the International Criminal Court.”

The current escalation is the latest attempt by the Israeli settler-colonial and apartheid regime, to quash all resistance to its, illegal colonial settlement expansionism, de facto and de jure annexations, while further entrenching its institutionalised regime of systematic racial discrimination and oppression on both sides of the Green Line. It comes in the aftermath of the Israeli Occupying Forces (IOF) arrest of the leader of the Islamic Jihad Movement, Sheikh Bassam Al-Saadi, from his home in Jenin camp in the northern occupied West Bank, on Monday evening, 1 August 2022. Since then, the Gaza Strip witnessed a state of high alert among the fighters of Saraya Al-Quds, the military wing for Islamic Jihad. Since Monday, Gaza has been subjected to a climate of extreme tension, while Egypt, Qatar and the United Nations continued to intervene in attempts to mediate between the resistance factions and Israel, the Occupying Power.

Al-Haq reported that “ On the precipice of a humanitarian disaster, Israel prevented fuel tankers from entering the Gaza Strip on Thursday, 4 August, practices which may amount to the deliberate imposition of living conditions denying the right to life, and prohibited as inhuman acts defined by the 1973 Apartheid Convention under Article 2(a)(i), 2(a)(i) and 2(b).”

Gaza Governorate: On August 5, at approximately 16:15 pm, the Israeli occupation forces, launched missile strikes targeting the fifth and sixth floors of the eastern side of the 14-storey Palestine Tower, located on Al-Shuhada Street in Al-Rimal neighborhood in the center of Gaza City. The attack targeted and killed the leader of the Islamic Jihad Movement, Tayseer Mahmoud Muhammad Al-Jabari, 50 years, commander of the Al-Quds Brigades in the North Gaza Brigade and a member of the Military Council of Al-Quds Brigades, and Salama Muharib Abdullah Abed, 38, whose bodies were cut into pieces by the bombing. The attack also resulted in the injury of a number of civilians living in apartments located in the same tower, and a number of citizens’ apartments were damaged, in addition to the Shehab News Agency office.

At approximately 16:25 on the same day, an Israeli warplane targeted, with a single missile, a group of citizens who were near Abu Samra Mosque, near Adel Al-Shawa orchard in Wadi Al-Arayes area in Al-Shuja’iya neighborhood, east of Gaza City, killing three Palestinians, two of which are civilians, including the child Alaa Abdullah Riyad Qaddoum, 5. Also killed in the attack were Youssef Salman Muhammad Qaddoum, 24, and Imad Abdel Rahim Ibrahim Shalah, 50. A number of citizens who were on the street at the time were wounded in the same bombing, including the child’s father, Abdullah Qaddoum, 31, and her brother, Riad, 6.

Also on 5 August 2022, Israeli forces bombed a targeted observatory of the resistance east of Al-Zaytoun neighborhood, east of Gaza. The attack killed Ahmed Mazen Mahmoud Azzam, 25, whose body was cut into pieces by the bombing.

Khan Yunis Governorate: On August 5, at approximately 16:20 pm, the IOF positioned behind the separation fence, fired a number of artillery shells, towards agricultural lands and homes of Palestinian citizens east of Al-Fukhari town, east of Khan Yunis. One of the shells hit the house of Adnan Atiya Al-Amour, located hundreds of meters from the separation fence,

which led to the injury of his daughter, Duniyana Adnan Atiya Al-Amour, 22, with injuries from shrapnel throughout the body. Duniyana was taken to Gaza European hospital in Khan Yunis, and pronounced dead an hour later.

At approximately 16:30, Israeli occupation drones targeted the gate of a training site belonging to Al-Quds Brigades, the military wing of Islamic Jihad, west of Khan Yunis, which resulted in the killing of two members of Al-Quds Brigades, while they were at the site. The deceased are Muhammad Hassan Musa Al-Bayouk, 35, and Fadel Mustafa Agrio Zorob, 29. The shelling also wounded seven civilians, including four children, who happened to pass near the place at the moment of the bombing of the site. The injured were taken to Nasser Medical Hospital in Khan Yunis, and their injuries were described as moderate to serious.

At approximately 18:50 pm, the occupation drones bombed a structure on agricultural land located in the Kizan Al-Najjar area, south of Khan Yunis, resulting in damage to the structure. Flying shrapnel from the attack damaged the windshield of an ambulance belonging to the Muscat Health Center of the Palestinian Ministry of Health, which is close to the place of targeting. No injuries were reported.

North Gaza Governorate: On August 5, at approximately 16:20 pm, the occupation artillery targeted an observatory of the resistance located northwest of the town of Beit Lahia in the northern Gaza Strip, killing Muhammad Ahmad Abd al-Fattah Nasrallah, 25, whose body was lacerated by the bombing. Civilian Imad Bashir Ali al-Sultan was injured with shrapnel to the face and right hand, and along with his daughter Israa, 5 who was injured with shrapnel in her chest. Their injuries were described as light.

At the same time, the occupation artillery targeted an observatory of the resistance, located east of Al-Naima Street, east of the town of Beit Hanoun, with a single shell, which caused the injury of two resistance fighters, one of whom was described as very serious and the other moderate.

Just Peace Advocates condemns in the strongest possible terms Israel’s military incursion into the occupied Gaza Strip, and the Israeli military attacks which were  carried out without precaution.

Just Peace Advocates joins with other organizations including the call made earlier today by Samidoun “urging all supporters of the Palestinian cause to take action to defend Palestine, the Palestinian people and their Resistance against the Zionist onslaught.”

We agree that it is clear that Canada, along with other imperialist powers are fully responsible for the crimes of the occupation, providing it with the weaponry that has been used to commit these killings, and has enabled the ongoing Nakba targeting the Palestinian people for the past 75 years, providing it with military, political, economic and diplomatic support. Rather than recognizing the Palestinian resistance’s legitimacy, these imperialist powers target the resistance organizations with “terrorist designations” and repression.

We join in a call for action including actions outlined by Samidoun earlier today:

Build the boycott of Israel – This is a critical moment to escalate the campaign to isolate the Israeli regime at all levels, including through boycott campaigns that target the occupation’s economic exploitation of the Palestinian land, people and resources as well as those international corporations, like HP, Elbit, and G4S, that profit from the ongoing colonization of Palestine. Learn more at: https://bdscoalition.ca/