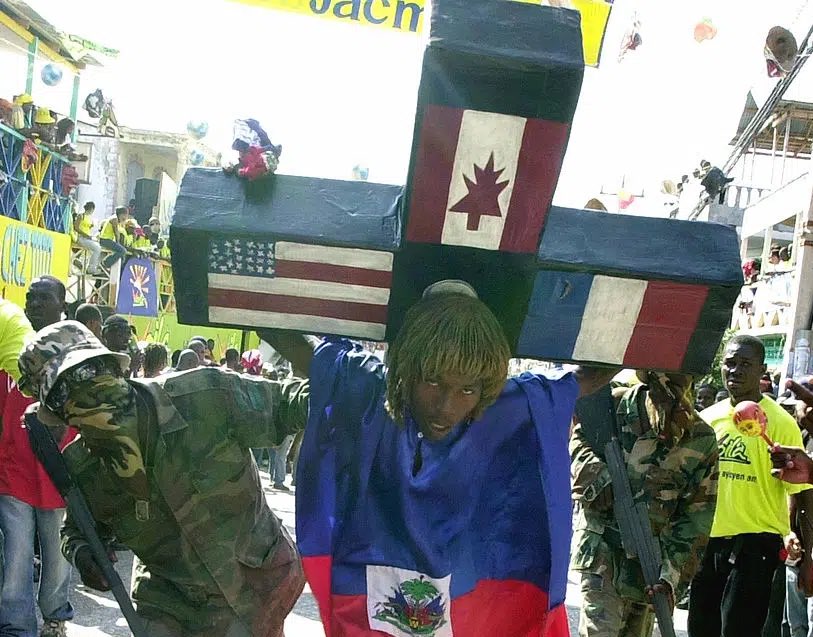 On Saturday Canada’s Prime Minister, defence minister and foreign ministers all tweeted about a Canadian military transport plane delivering armoured vehicles to the Haitian police. The cargo plane landed in Port-au-Prince with a US Air Force aircraft and takes place as the US and Canada push for a new military intervention into the Caribbean nation. Today the UN Security Council is expected to debate a US resolution calling for the deployment of a rapid action force to Haiti.

For two months large protests and blockades have been calling for the illegitimate Canadian backed prime minister Ariel Henry to go. Henry was appointed to lead Haiti 15 months ago by the Core Group, which consists of the representatives of the US, Canada, France, Spain, Brazil, EU, UN and OAS.

“If Ottawa wants to help Haitians they should stop propping up Ariel Henry and withdraw from the Core Group”, added Mugyenyi.

At protests and online Haitians regularly denounce Canada. Last Monday demonstrators tried to march on the Canadian embassy in Port-au-Prince and a week earlier an activist in Petit-Goâve told an interviewer they refuse to continue living under an “imperialist and colonialist system” imposed by the US, France, Canada, UN and Core Group. In Port-au-Prince two weeks ago a demonstrator carried a large wooden cross — as if crucified — bearing images of Canada, France and the US while last month protesters in aux Cayes marched with a casket draped with those three countries flags and a picture of Ariel Henry.

“Get out. Haitians have been telling Canada, the United States, Europe to get out”, explained Haitian-Canadian community leader, Jean Saint-Vil, who will be participating in an upcoming Canadian Foreign Policy Institute webinar on the “Crisis and Uprising: Canada’s role in Haiti”.

In 2004 US, French and Canadian forces helped overthrow Haiti’s elected government. After the foreign sponsored coup, a UN force occupied the Caribbean nation for 13 years. UN forces engaged in widespread sexual misconduct and through their reckless sanitation practices introduced cholera to the country, which killed over 10 000.

Just Peace Advocates was pleased to send this to our media list.