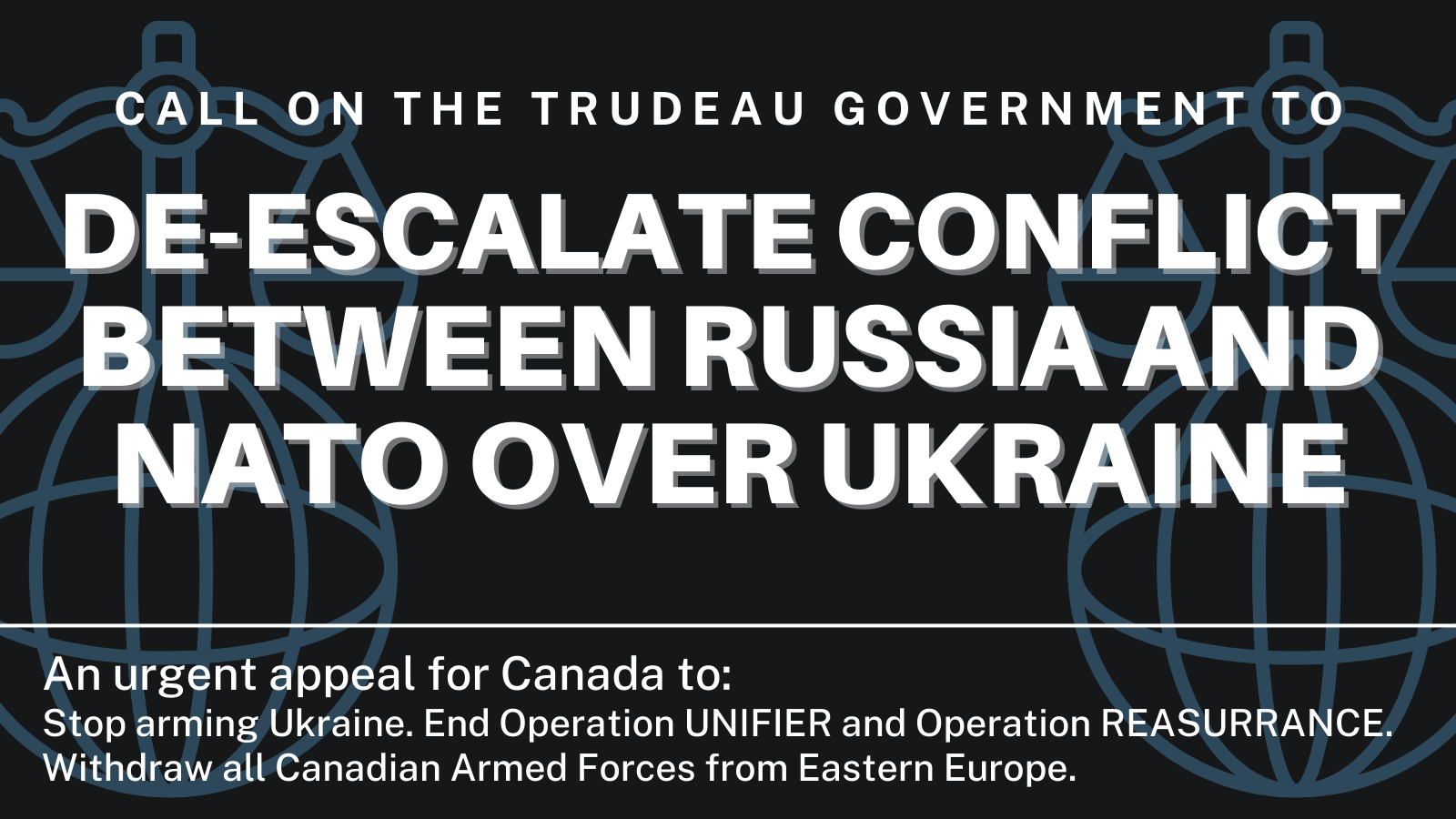 Click START WRITING to join us now in sending a letter to Prime Minister Trudeau and Minister of Foreign Affairs Joly calling on the Government of Canada to take immediate steps to de-escalate and demilitarize the conflict, and to engage diplomatically in long-term peace and security with Russia, Ukraine and throughout Eastern Europe.

(Tiohtiá:ke/Montreal) – As Minister of Foreign Affairs Mélanie Joly is in Europe this week to speak to her European counterparts about the crisis between NATO and Russia over Ukraine, a Canadian coalition has released an open statement calling on the Minister to demilitarize and peacefully resolve the crisis.

The coalition is comprised of several peace and justice organizations, cultural groups, activists and academics across the country. It includes the Canadian Foreign Policy Institute, the Association of United Ukrainian Canadians Winnipeg Council, Artistes pour la Paix, Just Peace Advocates and Science for Peace among many others. They are concerned about Canada’s role in fomenting the dangerous, escalating conflict in Ukraine. Their statement urges the Trudeau government to reduce tensions by ending arms sales and military training in Ukraine, opposing Ukraine’s membership in NATO and signing the Treaty on the Prohibition of Nuclear Weapons.

“Our public statement calls on the Trudeau government to take immediate measures to diplomatically and non-violently resolve the crisis,” explained Bianca Mugyenyi, the Director of the Canadian Foreign Policy Institute, “We don’t want war with Russia.”

The coalition wants the Canadian government to stop permitting weapons sales to Ukraine. In 2017, the Trudeau government added Ukraine to the Automatic Firearms Country Control List that has allowed Canadian companies to export rifles, guns, ammunition, and other lethal military technology to the country.

“Over the past seven years, thousands of Ukrainian civilians have been injured, killed and displaced. Canada must stop militarizing the conflict and making it worse,” said Glenn Michalchuk, a Ukrainian-Canadian activist with Peace Alliance Winnipeg.

The coalition also wants Operation UNIFIER to end and not to be renewed. Since 2014, the Canadian Armed Forces have been training and funding Ukrainian soldiers including Ukraine’s far-right, neo-Nazi Azov movement, which has been engaged in violence in the country. Canada’s military operation is set to end in March.

Tamara Lorincz, member of the Canadian Voice of Women for Peace, argued, “It’s NATO expansion that has undermined peace and security in Europe. NATO has placed battle groups in the Baltic countries, put soldiers and weapons into Ukraine, and conducted provocative nuclear weapons exercises on Russia’s border.”

The coalition asserts that Ukraine should remain a neutral country and the Canada should withdraw from the military alliance. They want Canada to work through the Organization for Security and Cooperation in Europe (OSCE) and the United Nations to negotiate a resolution and a lasting peace between Europe and Russia.

In conjunction with the statement, World Beyond War Canada has also launched a petition that can be signed and sent directly to Minister Joly and Prime Minister Trudeau. The statement and petition can be found here: https://www.foreignpolicy.ca/ukraine

Just Peace Advocates was pleased to be part of the signatories to this statement.

January 2022 —We, the undersigned Canadian peace groups and civil society organizations, are very concerned about Canada’s role in fomenting the dangerous, escalating conflict in Ukraine between the North Atlantic Treaty Organization (NATO) and the Government of the Russian Federation.

Thousands of civilians in Ukraine have been injured, killed and displaced due to the intensifying conflict since 2014. The situation could get much worse as Russia and three NATO countries are nuclear-armed and five NATO countries station US nuclear weapons in their territory in Europe. We do not support NATO membership for Ukraine, but call for neutrality and sustainable peace.