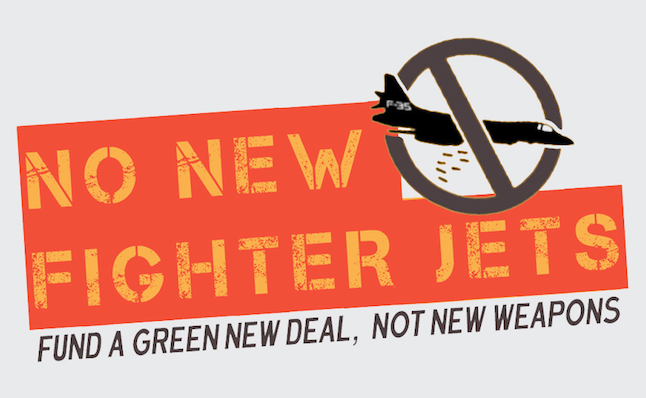 Ottawa — Beginning on Monday, November 22, a week of action will take place across Canada in opposition to the Trudeau government’s plan to purchase 88 new warplanes at a cost of $19 billion ($77 billion over their lifecycle). Rallies will be held in Toronto, Vancouver, Victoria, Kingston, Nanaimo, Hamilton, Regina, Halifax, Edmunston, Collingwood, Edmonton, Montréal and Ottawa.

“Canada should not be spending tens of billions of dollars on climate destroying fighter jets designed to fight in NATO wars”, noted Bianca Mugyenyi, Director of the Canadian Foreign Policy Institute. “The extreme weather in British Columbia demonstrates these resources should be put towards mitigating the climate crisis.”

“We want the federal government to invest in health care, affordable housing, green jobs and a just recovery”, says organizer Tamara Lorincz, a member of the Canadian Voice of Women for Peace. “Fighter jets are for violence, we need global cooperation to deal with the pandemic and climate emergency.”

The week of action is organized by the No Fighter Jets Coalition. For more information: www.nofighterjets.ca