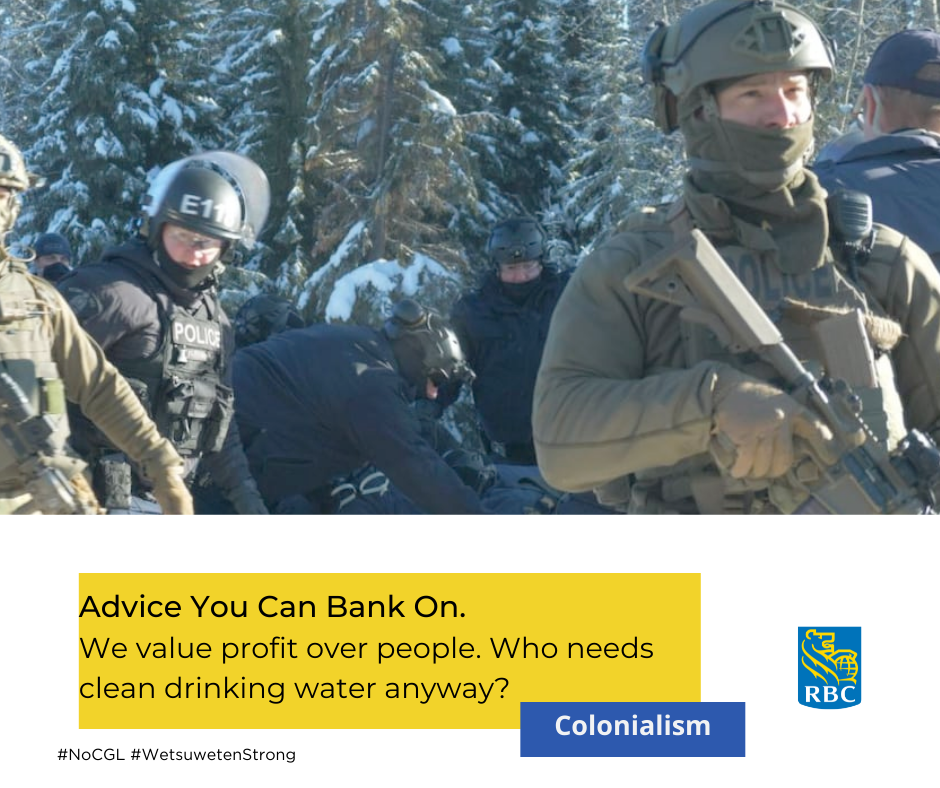 Let RBC know that we continue to insist they break relations with Palantir.

Over the last month, almost 6,000 letters were sent to RBC asking for them to break relations with Palantir Technologies Inc (PTI). The RBC has not responded to these letters, but in both the case of a letter sent by the Wet’suwet’en hereditary chiefs regarding Coastal GasLink investments, and a letter sent by a coalition of organizations re Palantir, RBC replied with non-signed letters from a generic RBC email with letters with hollow words such as:

“RBC highly values the relationships we have with Indigenous Communities and the unique social, cultural and historic contributions that Indigenous peoples have made in Canada.”

“we can assure you that RBC is strongly committed to supporting and maintaining the highest standards of ethical conduct and respect for human rights”.

Read letter from RBC re Palantir

The use of law enforcement databases, gathered from the Israeli military, skews the predictive power of the AI analysis to focus upon the types, locations, and Palestinians currently in the database. Human rights organizations deplore this type of policing. In Canada, the way these data bases are constructed makes them unlawful. (Read more below)

In the USA, Palantir has multi-million-dollar contracts with Immigration and Customs Enforcement (ICE) that aid in human rights abuses, like family separation and deportations. You can read more about & join this campaign HERE.

Learn about Palantir and its involvement in ICE, police data sharing & predictive policing, military AI, Covid-19 surveillance and monitoring, and other controversies, as well as targeting of Palestinians more from Investigate, the American Friends Service Committee project.

As of November 2021, the Royal Bank of Canada (RBC) has 2,403,812 shares of Palantir Technologies Inc Class A (US:PLTR) with total holdings valued at $57,787,000 USD. The RBC holdings in Palantir have been steadily increasing quarter over quarter.

RBC made these investments despite the controversy surrounding the September 2020 direct listing of PTI on the New York Stock Exchange. Palantir was criticized in the financial press for an unusual corporate governance structure.

For years, Coastal GasLink – a pipeline that would transport fracked gas from northeast BC to Pacific transport ships – has been opposed by Wet’suwet’en hereditary chiefs on their traditional land.

Wet’suwet’en hereditary chiefs have been recognized by the Canadian and BC governments as having rights on the Yintah (traditional land). Yet they still face heavily militarized RCMP officers with machine guns and sniper rifles who violently arrested land defenders, elders, and journalists.

This conflict is being directly fueled by Bay Street banks like RBC. Send letter directly HERE.

In Canada, the RCMP was recently criticized by Privacy Commissioner Daniel Therrien who tabled a report to Parliament after investigating the national police force’s use of software from U.S.-based Clearview AI. Mr. Therrien ruled, by using this third party’s tools, the RCMP violated the section of the Privacy Act specifying no personal information can be collected by a government institution “unless it relates directly to an operating program or activity of the institution.”

“The use of facial recognition technology by the RCMP to search through massive repositories of Canadians who are innocent of any suspicion of crime presents a serious violation of privacy,” Mr. Therrien found. “A government institution cannot collect personal information from a third-party agent if that third party agent collected the information unlawfully.”

PTI collects data from all clients to feed the massive data base upon which facial recognition and AI predictions are based. Like the database employed by Clearview AI, there is significant doubt that all the individuals whose picture is resident in the PTI database are voluntarily there. As a result, there is considerable concern for violation of human rights.

The use of law enforcement databases, gathered from the Israeli military, skews the predictive power of the AI analysis to focus upon the types, locations, and Palestinians currently in the database. Human rights organizations deplore this type of policing. In Canada, the way these data bases are constructed makes them unlawful.

The integration of the ‘world view’ of the developers of the AI leads to major implications in the application of the models. Princeton computer science professor Olga Russakovsky indicates the bias goes well beyond gender and race. “A.I. researchers are primarily people who are male, who come from certain racial demographics, who grew up in high socioeconomic areas, primarily people without disabilities,” Russakovsky said. “We’re a fairly homogeneous population, so it’s a challenge to think broadly about world issues.”

Organizations wish to endorse can do so HERE.