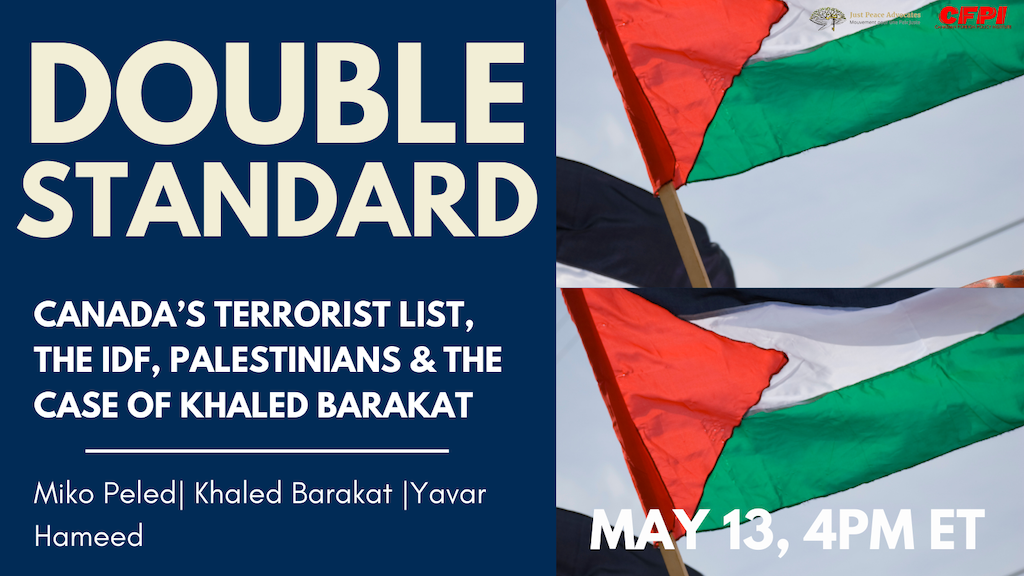 Just Peace Advocates has joined over 50 Canadian and international organizations have endorsed this statement, as well as numerous individuals including Roger Waters.

Write your own letter

Thanks to the Canada Palestine Association for initiating this statement.

Today, we are witnessing an intensified campaign by the pro-Israel lobby in Canada to smear Palestinian activists and their supporters. Last week, the National Post (NP) ran an online article about Palestinian-Canadian writer Khaled Barakat and the advocacy organization Samidoun. On April 30, the same article was splashed across their front page of their paper and has since been referenced in the Canadian Senate and the Jerusalem Post.

A year ago, Canada Palestine Association and 35 other concerned organizations issued a statement detailing their rejection of attempts to criminalize Samidoun, a Palestinian advocacy group for prisoners, by the Centre for Israel and Jewish Advocacy (CIJA). At that time, we said:  Should Canada’s policies on these important issues be decided by what the Israeli government dictates?

We repeat the question now. All of this recent hysteria can be traced back to the one article written by Terry Glavin. However, Mr. Glavin admitted in his own blog on April 29 that B’nai Brith first approached him with their “files” on the subject. He also thanked CIJA in the same blog entry for their assistance.

There seems to be nothing new in the recent defamation campaign, which relies heavily on already known social media posts and Israeli official and intelligence sources (which are mentioned at least 13 times in the NP article). So what pushed the Zionist lobby groups to resurrect this campaign at this specific time? Is it an attempt to deflect attention from the student union resolutions in support of Palestine at major Canadian universities? Or an effort to distract from the growing number of organizations that have expressly condemned Israeli practices as apartheid?

The French government recently tried to ban a Palestinian support group, “Collectif Palestine Vaincra”, but have already been forced by their own courts to suspend that decision.

We tell the Canadian government that the old smear tactics of “trial by fire” are not acceptable. As our statement last year concluded: “This criminalization of Palestinian advocacy is unacceptable and unfounded; Palestinian-Canadians and their supporters have no intention of allowing biased officials to suppress their democratic rights and their voices.”

Organizations wishing to join can do so HERE, and Individuals HERE.

Join us for webinar sponsored by Canadian Foreign Policy Institute, Just Peace Advocates and others:

Register for this talk on how Canada criminalizes Palestinian political life while assisting the violent Israeli military. Join Miko Peled, Khaled Barakat and Yavar Hameed for what is sure to be an excellent discussion.