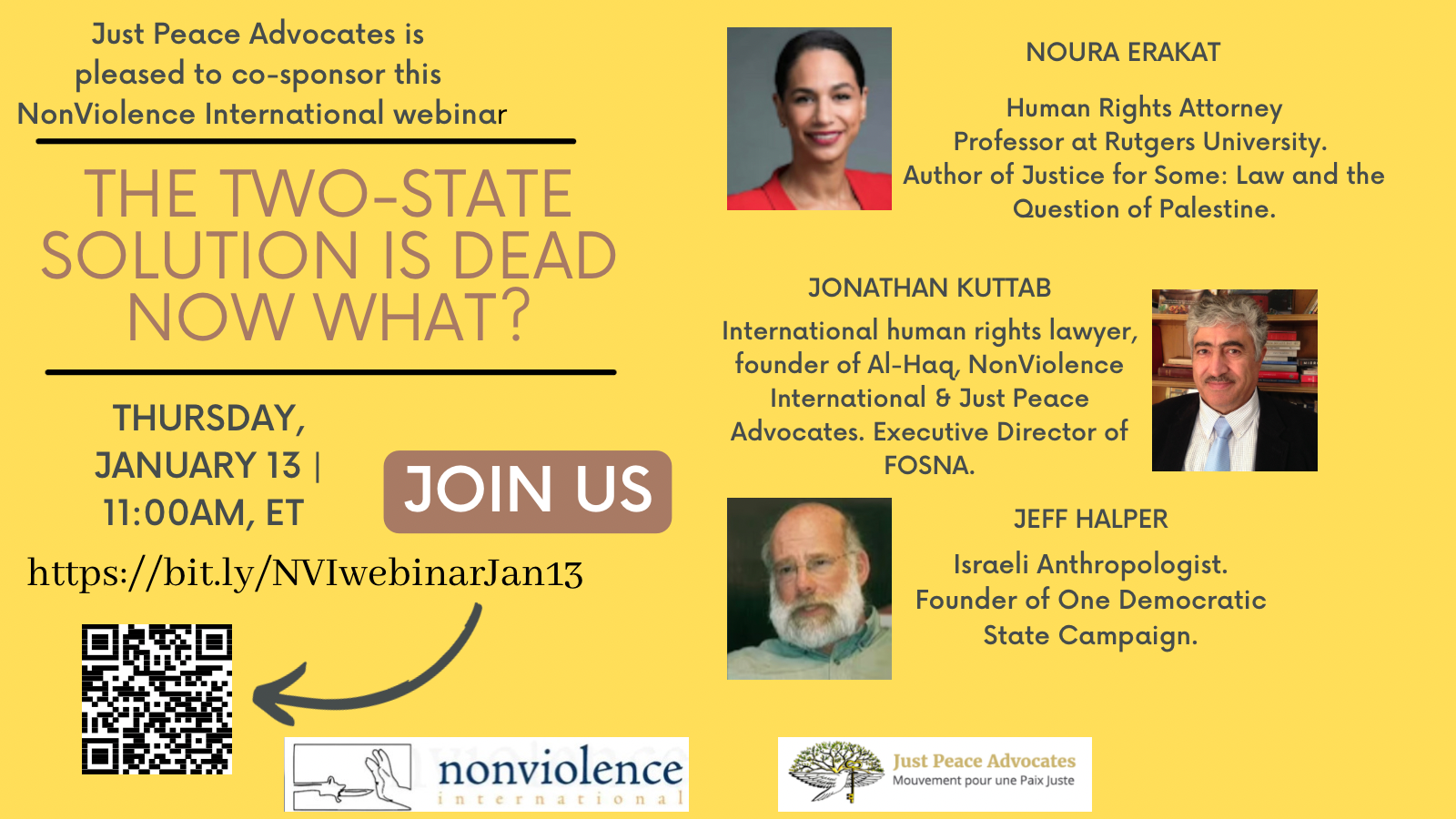 “Despite the fact that almost every knowledgeable observer

acknowledges privately that the two-state solution has no

“Why is it that the language of two-state solution survives?”

Jonathan Kuttab, Beyond The Two-State Solution

Noura Erakat and Jeffrey Halper will be in dialogue with Jonathan Kuttab to discuss moving beyond the perpetuating of a status quo.

Jeffrey Halper, director of the Israeli Committee Against House Demolitions and a co-founder of The One Democratic State Campaign

More about the panelists:

Beyond The Two-State Solution, by Jonathan Kuttab, articulates a vision of a one-state solution that challenges both Zionism and Palestinian Nationalism.

Jonathan continues this conversation, engaging in a discussion with renowned activists and academics about the necessity of a one-state solution. Panelists included Jeff Halper, and Noura Erakat. Hosted by Jonathan Kuttab.

Jonathan Kuttab is co-founder of the Palestinian human rights group Al-Haq. A well-known international human rights attorney, he has practiced in the US, Palestine, and Israel. He serves on the Board of Bethlehem Bible College and is President of the Board of Holy Land Trust. He is cofounder of Non-Violence International He is co-founder and board member of the Just Peace Advocates. He was the head of the Legal Committee negotiating the Cairo Agreement of 1994 between Israel and the PLO. Jonathan is the executive director of Friends of Sabeel North America. Check out his website at: https://jonathankuttab.org/

Jeff Halper is an Israeli anthropologist. He serves as the Director of the Israeli Committee Against House Demolitions in Jerusalem and is a founding member of the One Democratic State Campaign. Jeff is the author of An Israeli in Palestine (London: Pluto Press, 2008) on his work against the Occupation; Obstacles to Peace (ICAHD’s manual for activism in Palestine/Israel); and War Against the People: Israel, the Palestinians and Global Pacification (Pluto, 2015), which was shortlisted for the Palestine Book Award. His latest book is Decolonizing Israel, Liberating Palestine: Zionism, Settler Colonialism and the Case for One Democratic State (London: Pluto, 2021).

Noura Erakat is a human rights attorney and associate professor at Rutgers University, New Brunswick. She has served as legal counsel to the U.S. House of Representatives and as a legal advocate for Palestinian refugee rights at the United Nations. Noura’s research interests include human rights and humanitarian, refugee, and national security law. She is a frequent commentator, with recent appearances on CBS News, CNN, Fox News, and NPR, among others, and her writings have been widely published in the national media and academic journals.