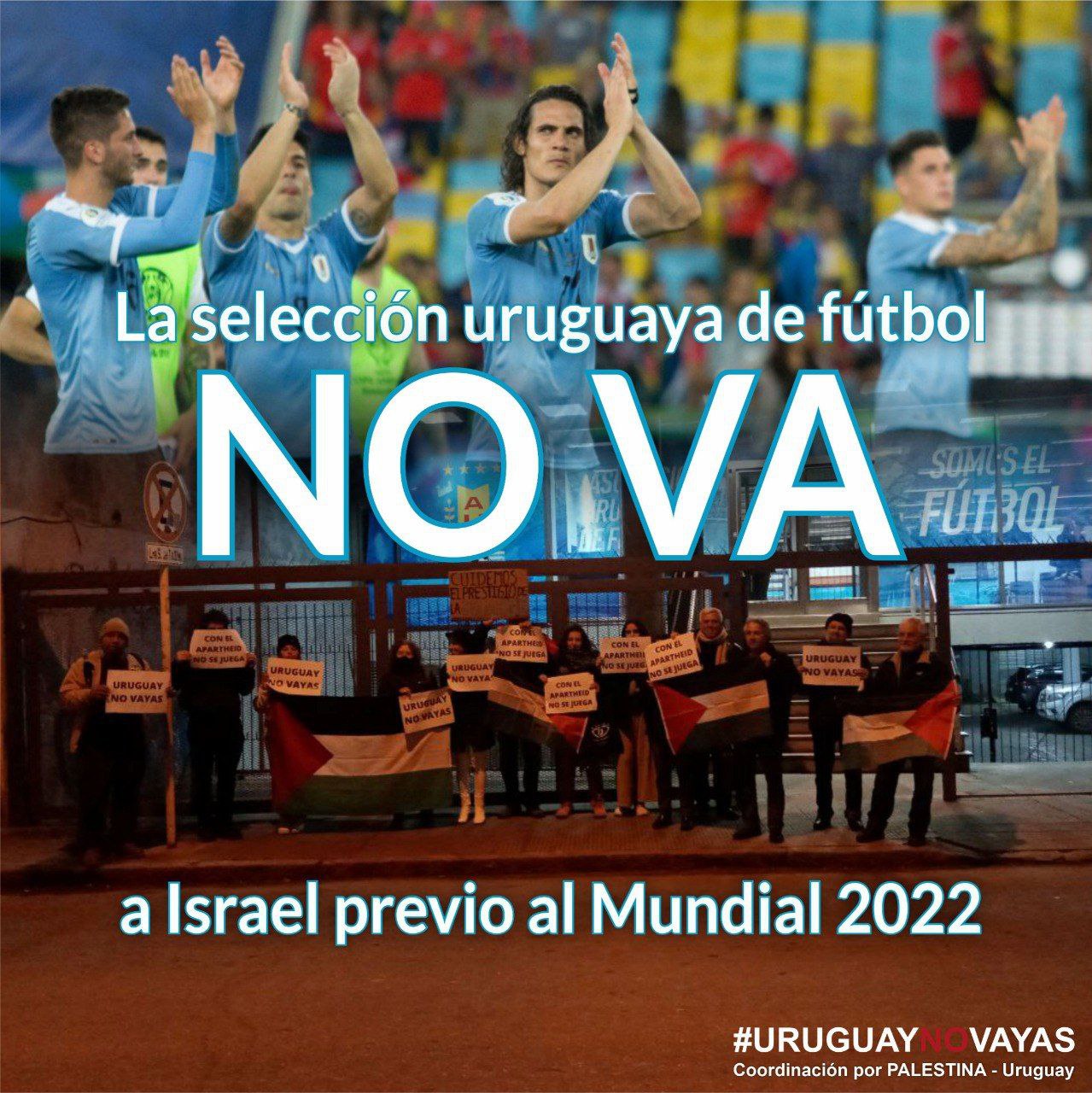 We finally can share with you this amazing news: our campaign has reached its goal,

The Uruguay’s national football team will not do its final preparation for the World Cup in Israel.

The AUF made its own official, public announcement, so there is no chance that the decision is changed, and Israel has been definitely discarded.

Thank you deeply for all your contributions and devoted work and support to raise the scope and the projection of this campaign. Another BDS victory. Justice, Freedom and Equality for Palestinian people will prevail!

URUGUAY IS NOT GOING TO ISRAEL!

In view of the official and public confirmation in the media that Uruguay will carry out the final preparation for the 2022 World Cup in Abu Dhabi, we celebrate the news:

URUGUAY IS NOT GOING!

As we said when we launched the campaign, we do not want the celeste T-shirt to be used to whitewash Israeli apartheid or to cover up its serious violations of human and collective rights of the Palestinian people.

We based our statement on the letter we delivered on June 3 at the AUF (Uruguay’s Football Association) headquarters, with the signature of more than 20 social, human rights and football-related organizations in our country.

In these months, the AUF received four letters from Palestinian football clubs and associations explaining the continuous and serious aggressions that Israel commits against Palestinian footballl and sports, plus countless messages from organizations around the world asking the national team not to lend itself to whitewash Israel’s crimes through football.

The many messages sent to the AUF include: from a former coach of the Palestinian national football team, from musician Roger Waters, from Jewish anti-Zionist groups in several countries, from religious institutions, from human rights organizations and solidarity groups from five continents, and from Palestine, Israel, South Africa, India, Canada, USA, Europe, Australia, Aotearoa/New Zealand, Turkey, and across our own region. We are deeply grateful for all the solidarity and support received from so many territories and people!

We hope that these messages have been read and heard by the national team players and the AUF leadership; and we are hopeful that they will be taken into account in the future. Because as we said from day one: you cannot paly with apartheid.

For a FREE PALESTINE, URUGUAY DOES NOT GO!

During the Just Peace Advocates with Friends of Sabeel North America May 28 launch of “FIFA Suspend Israeli Apartheid” Roger Waters told the Uruguay Team – don’t do it. Don’t train or play any matches in Israel.

Just Peace Advocates was pleased to join in this campaign & reach out internationally in support of this campaign.

On May 30, 2022, solidarity groups in Uruguay launched the campaign URUGUAY, NO VAYAS!  (URUGUAY, DON’T GO!) to ask the AUF (Asociación Uruguaya de Fútbol — AUF, or Uruguayan Football Association)and the Uruguay men’s soccer team to NOT to accept the invitation from the State of Israel to carry out the final phase of preparation for the World Cup in that country and/or play a friendly match, on the way to Qatar.

And now victory has been achieved, with AUF doing the right things, and not accepting sport washing invite. Congrats to our friends in Uruguay on this campaign.