Defence critic out of step with NDP grassroots 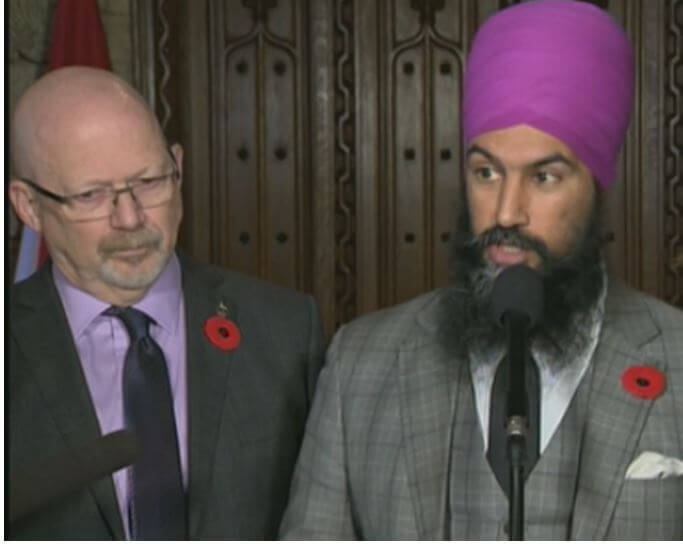 Jagmeet Singh and NDP officials, it is time for Garrison to be removed as NDP defence critic for his militarism and pro-Israel stance.

Over 400 letters sent in under 2 hours. Join with others & send letter

Garrison has repeatedly demanded more resources for the military, which has more than 10 times the budget of Environment and Climate Change Canada.

Garrison recently complained to the Hill Times that the budget didn’t devote enough to the military, saying

we spent a decade not providing the military with an adequate operating budget to do the work we already asked them to do. It’s time to fix that.

Similarly, when the Liberals announced a 70 per cent increase in military spending in 2017, Garrison criticized the announcement for not putting up more money immediately.

Garrison supports the government’s plan to spend $19 billion – $77 billion over their lifecycle – on 88 new aggressive, climate destroying, fighter jets. He also wants Canada to purchase 15 surface combatant vessels armed with Tomahawk missiles that can travel 1,700 kilometers. The frigates are expected to cost $77 billion upfront and an eye-popping $286 billion over their lifecycle.

In mid-April, 85% of NDP convention delegates voted for the Palestine Resolution. It calls for “Ending all trade and economic cooperation with illegal settlements in Israel-Palestine” and “Suspending the bilateral trade of all arms and related materials with the State of Israel until Palestinian rights are upheld.”

In response to Israel’s recent ethnic cleansing in East Jerusalem, attacks on the Al-Aqsa mosque and violence in Gaza, NDP leader Jagmeet Singh called for an arms embargo on Israel and the party promoted a petition making this demand, which most NDP MPs have shared.

Garrison has stayed quiet on the convention resolution and arms embargo. He also failed to criticize Israel’s recent violence and ethnic cleansing. Instead, on May 25 he signed a statement designed to shield Israel from criticism, which was promoted by lobby group Centre for Israel and Jewish Affairs (CIJA).

Garrison is vice-chair of the Canada-Israel Interparliamentary Group (CIIG). Three years ago 200 well-known musicians, academics, trade unionists and NDP members called on NDP MPs to withdraw from CIIG. Most ultimately did so. Garrison has refused to leave a group that promotes “greater friendship” and “cooperation” between the Canadian and Israeli parliaments.

Garrison is out of step with NDP members on Palestinian rights. His militarism is also not shared by most in the party. It is time Garrison was removed as NDP defence critic.

We join with Canadian civil society in a call to Trudeau in his new mandate to not follow the... read more

As organizations and individuals with expertise in anti-racism, we are profoundly concerned by the government’s proposed “online harms” legislation – purporting... read more

Just Peace Advocates is pleased to share information about the #LetKashmirDecide Global Coalition launch on Sunday, October 17 from... read more