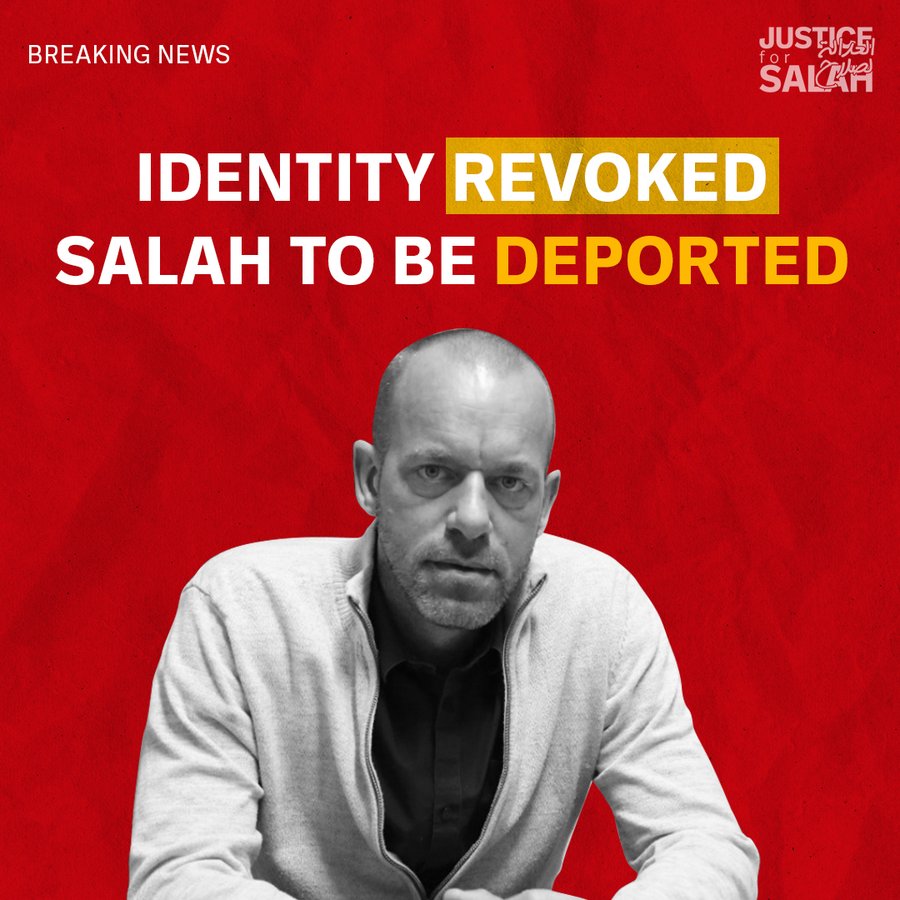 Salah Hamouri, the imprisoned French-Palestinian lawyer and human rights defender jailed without charge or trial under administrative detention since March 2022, has been told he will be forcibly deported to France and stripped of his Jerusalem ID on Sunday, December 4. His detention is scheduled to expire on 4 December, upon which he could be released home to Jerusalem, face yet another extension of his arbitrary detention or be forcibly deported to France.

Hamouri has been fighting the attempt to forcibly exile him to France since 2021, when the Israeli occupation interior minister issued an order stripping Hamouri of his residency in Jerusalem, the city in which he was born and in which he lives, after multiple threats to do so. When he was seized from his home in March 2022, it was only days after he published an article in English on his case in Jacobin magazine about his battle against the attempt of the Israeli occupation to forcibly expel him from his home city of Jerusalem.

The Justice for Salah campaign is calling for a Twitter storm on Thursday, 1 December, from 3 pm to 5 pm Jerusalem time (5 am to 7 am Pacific time, 8 am to 10 am Eastern time, 2 pm to 4 pm central Europe) to demand justice and liberation in Palestine for Salah Hamouri. Follow the latest updates from the campaign website.

Write a letter to Canadian government

Canada responsibility as a Third-Party Country

Third party countries need to activate universal jurisdiction in accordance with Article 147 of the Fourth Geneva Convention to ensure that Israel is held accountable and does not enjoy impunity for the grave violations it commits against Palestinians, including arbitrary detention and forced displacement.

This means condemnation and rejection of the Israeli decision to revoke the Mr. Hammouri’s Jerusalem residency based on a secret file and allegations of disloyalty to the occupying power.

This revocation is a violation of the nternational law per Article 43 of the Hague Convention on the Rules of Land War 1907 and Article 64 of the Fourth Geneva Convention of 1949, which prohibit an occupying power to act as the owner of sovereignty over the occupied territory. Israel’s practices also violate Articles 45 of the Hague Convention and 68 (3) of the Fourth Geneva Convention, which prohibit an occupying power from demanding loyalty from the inhabitants of the occupied territory.

Furthermore, this is illegal in international humanitarian law as forcibly deporting inhabitants of an occupied territory is considered a war crime under Article 8 of the Rome Statute. In fact, when forcible deportation is part of a widespread and systemic policy against civilians—as it is in Israel—it also is considered a crime against humanity under Article 7 of the Rome Statute.

Revoking the residency of human rights defenders and others in Jerusalem violates various rules of international human rights law such as the right to family life, the right to freedom of movement, including the right to leave and return to one’s homeland, and the right of expression and peaceful assembly in accordance with Articles 19, 21 and 22 of the International Covenant on Civil and Political Rights.

These deportation practices also contradict declarations made by the UN Security Council and the General Assembly that it is illegal to change the status quo in terms of demographics in the city of Jerusalem. Finally, emptying the city of its Arab residents is a blatant application of the internationally condemned practice of apartheid.

Salah Hammouri’s case illustrates the Israeli authorities’ apartheid regime, including the widespread and systematic practice of illegal deportation and demographic manipulation, as manifested through its laws, policies, and practices, to maintain an institutionalized regime of domination and oppression over the Palestinian people as a whole. It is part of a larger attack on Palestinians living in occupied Palestine, and Palestinian residents of Jerusalem in particular, including with regard to Israel’s policy of forcible transfer and persecution, whether through residency revocation – under so-called “breach of allegiance” to the State of Israel or by failing to prove that Jerusalem is their “centre of life” – and other actions including through forced evictions, home demolitions, denial of building permits or other facets of Israel’s coercive environment imposed on the Palestinian people to drive them out of Jerusalem, and Palestine at large.​

In June 2022, a letter was sent to the Canadian Head of Mission in Ramallah, Robin Wettlaufer signed by more than 30 civil society organizations from Canada, Palestine and elsewhere, and more than 100 lawyers, academics, faith leaders and others, most from Canada. Signatories included former UN rapporteur Richard Falk, academic Noam Chomsky, and author Yann Martel. They urged Wettlaufer to visit human rights defender and lawyer Salah Hammouri in Ofer prison, and to pressure Israeli authorities for; Salah Hammouri’s immediate and unconditional release.

About 1,000 letters were written to around this time to Global Affairs Minister Joly and the Ramallah based Head of Mission Wettlaufer. No one received a response.

Just Peace Advocates made an Access to Information and Privacy (ATIP) request on July 21, 2022 Global Affairs Canada asking for:

“All information in the Canada Mission in Ramallah office related to Salah Hamouri that has
been relayed to and from Global Affairs Canada and/or the PMO, or other Ottawa officials
(elected officials & staff and/or civil service) from January 1, 2021 to current. This should
include but not be limited to any briefing notes, correspondence, advisories, phone calls, and
meetings. This would include records of the head of Mission Wettlaufer and all of the staff in
her office.”

The Access to Information and Privacy (ATIP) was response was received on October 13. Most of the 55 pages were media clipping from JMCC.org with most of the material having absolutely nothing to do with Hammouri. There was one article from Electronic Intifida and a couple references for news from Al Ayyam regarding Hammouri.

There was a letter with comprehensive infromation from the Cario Institute for Human Rights Studies from December 10, 2021, but the release showed no indication of a reply

Similiarly, the June 26, 2022 letter sent by Just Peace Advocates (signed by more than 30 civil society organizations from Canada, Palestine and elsewhere, and more than 100 lawyers, academics, faith leaders and others, most from Canada. Signatories included former UN rapporteur Richard Falk, academic Noam Chomsky, and author Yann Martel) was in the release.

It is possible that there was some deliberation about these letters in the several fully redacted pages, but no trace of analysis, briefing material or communications considerations were provided in the release.

There were several messages between Andrea Niklaus, the First Secretary (Political) and Head of Mission Wettlaufer, about an inquiry by Karen Rodman about the status of an earlier email (also in the release) asking for Wettlaufer or her staff to vision Hammouri in prison. During a briefing earlier in 2022, The records of the transactions were almost completely redacted but an email from Lina Zbeideh (EA to Wettlaufer) on June 13 to Andrea Niklaus indicated “this woman (referring to Karen Rodman) just forwaded me an email but she is not an ROC contact.” Another staffer copied replied “exactly.” Niklaus confirmed. It has been confirmed that ROC means:  Representative Office of Canada. Thus, it seems if one is not listed with this designation that perhaps the Head of Mission is not required to respond?

There was reference to a briefing on June 15 by The Negotiations Affairs Department (NAD)/Negotiations Support Unit (NSU) of the Palesitnian Authority which Wettlaufer shared with Niklaus. There was discussion about whether this would be virtual, and it appeared that perhaps Niklaus was attending but again redaction makes if impossible to confirm.

No information was provided by the October 13, 2022 ATIP about the approximately 1000 letters written to the Ramallah office in regard to Hammouri’s case. With these copied to the Minister of Foreign Affairs one would expect there would be correspondence at least about these having been received, and what action if any might be taken. When Just Peace Advocates questioned the missing records, Global Affairs said “perhaps part of letter writing campaign.” While the records were not requested directly any correspondence or briefing material should have been included. Still, six weeks later Global Affairs has not given a concrete response to this gap in record keeping/access.

In fact, given the majority of the package was clipping from a press service, these need not have been included in package as the request was specific about transactions between Ramallah and Ottawa.

One is left to wonder about the processing of this ATIP, and the gap in information. Regardless it woudl seem that there was limited consideration at best on whether to respond to Canadian citizen’s letters or information provided by Canadian and other human rights groups, not alone actually consider the informatio provided nor take action. Shameful but not surprising.