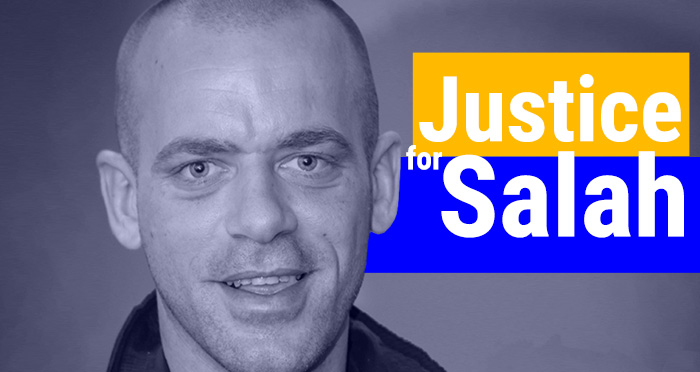 We call for immediate release and demand Israel rescind the decision to revoke his Jerusalem residency based on “secret evidence.”

We, the undersigned organizations, unions, and institutions, condemn and reject the arbitrary measures taken by the Israeli occupation forces against human rights defender and lawyer at Addameer, violating its obligations under international humanitarian and human rights law.

For many years, Salah Hammouri has been subjected to a continuous harassment campaign by the occupation forces due to his human rights activism. Mr. Hammouri has spent nine years in Israeli occupation prisons as a result of over six arrests. The longest stretch he spent in an occupation prison was seven continuous years between 2005 and 2011, after he was forced to choose between being deported to France for 15 years or imprisoned for 7. Since the beginning of March 2022, the Israeli occupation forces have held Mr. Hammouri in their prisons without charge under the administrative detention system, based on a secret file that even his lawyer is not permitted to view. These actions make his detention arbitrary and illegal under international law.

The occupation forces have taken several additional acts against Mr. Hammouri in attempt to deport him from Jerusalem. Most recently, in October 2021, they issued a decision to revoke his Jerusalem residency for charges of not showing loyalty to the State of Israel, which was also based on “secret evidence.” Thereafter, they have tried to enforce the decision by attempting to deport him to France; where he holds citizenship. Mr. Hammouri’s wife and children currently reside in France because the occupation authorities have prevented them from entering the occupied territories, thus depriving him of his right to have his family reside with him.

When Mr. Hammouri is released, he fears he will be forcibly removed and deported from his home city of Jerusalem. The Israeli Supreme Court is scheduled to hear Mr. Hammouri’s residency revocation case in February 2023.

The harmful actions taken against Mr.Hammouri are important to be understood for two primary reasons:

In addition, although Mr. Hammouri holds French citizenship, the French government has not played any effective role in pressing for his release from this arbitrary detention. The Israeli government recently placed Mr. Hammouri in a collective isolation confinement as a punishment for sending a letter to French President Emmanuel Macron asking him to help with his release. Since then, the French government has not taken any public action to assist him such as condemning the detention or calling on the Israeli occupation authorities to immediately release him. Instead, they merely visited him and asked the Israeli government to “respect his rights.” These actions are clearly insufficient, not in line with the usual response of French authorities in cases of arbitrary detection of French citizens and does not demonstrate a strong enough political will to hold the Israeli authorities accountable.

Accordingly, the organizations, unions, institutions, and human rights bodies that have signed this statement, alongside the Justice for Salah campaign, affirm the following:

Signatories (To add the name of your orgnization/institute among the signatories, please fill in the form at the end of the page – below):