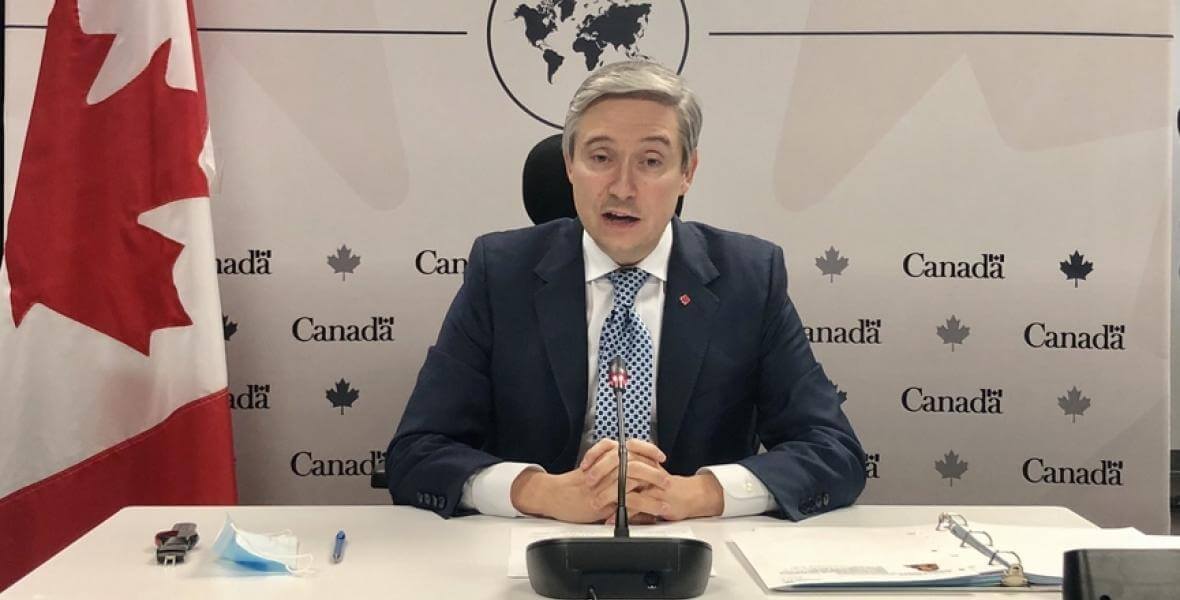 On December 10, U.S. President Donald Trump tweeted that he “signed a proclamation recognizing Moroccan sovereignty over the Western Sahara” and that Israel and Morocco “have agreed to full diplomatic relations.”

The proclamation by the U.S. was in return for Morocco’s decision to formally recognize Israel, a country which is also an occupying power.

It took less than 24 hours for Canada to follow suit.

On December 11, Canada’s Minister of Foreign Affairs François-Philippe Champagne, tweeted: “Canada welcomes the announcement of the normalization of relations between #Morocco and #Israel. This is a positive step that will help strengthen ties.” He added that “Canada’s long-standing position on Western Sahara remains unchanged.”

Responses to Champagne’s tweet spoke of the usual “reflexive rubber stamp” to U.S. foreign policy and the complicity with the rewarding of war crimes between colonizers.

The pro-Israel organizations shared the news with retweets. Otherwise there has not been much said about Canada’s response supporting the normalization of relations between Morocco and Israel.

Meanwhile, in Israeli media, Haaretz included a December 16 article titled “Occupiers of the World Unite!” Author, Michael Sfard minced no words saying: “Israel is the spearhead of the Front for Restoring the World to the Pre-World War II Era.” He said that normalization has crossed a “red line,” and that it set aside the key principle anchored in the United Nations Charter that the “use of force in international relations is inacceptable (except in self-defense)” and that “sovereignty is not acquired by force.”

“The problem is that when we entrench ourselves in the injustice that we are doing to others, and refuse to end it, we have no choice but to join the coalition of the world’s enslavers. That’s the nature of Israeli-style normalization: Occupiers of the world, unite!”

Jonathan Kuttab, founder of the Palestine human rights organization Al-Haq as well as Just Peace Advocates in Canada visited Western Sahara in 2015, and has spoken out in reaction to the move by Morocco.

Kuttab says that “since the end of World War II, one of the bedrocks of international law was the inadmissibility of acquisition of territory by force.”

This principle, noted Kuttab, was explicitly violated by the U.S. not only in the Trump administration’s “approval of the annexation of East Jerusalem and moving the U.S. embassy there, but also the annexation of the Golan Heights.”

Kuttab indicated that there is:

“Yet another violation of this principle by announcing that the U.S. recognizes Morocco’s sovereignty over Western Sahara, in a horse deal that traded normalization with Israel to recognize the highly contested claims of Morocco over Western Sahara. Apart from the clear violation of international law, and the injustice to the people of Western Sahara and their right to self-determination, this move further erodes international law and principles, and almost invites countries all over the world, particularly in Africa, to invade their neighbors, or wait for an opportune moment to assert their claims, and for the proper incentive needed to have the U.S. approve it.”

In a release by the Institute for Public Accuracy, Kuttab stressed, given these ramifications, the need for the U.S. to reverse the recognitions along with other U.S. actions such as the withdrawal from international agreements.

Engler wrote that the:

“Seizure of phosphate from a Moroccan state company in South Africa and Panama is a blow to corporate Canada and a victory for national independence struggles. It should also embarrass the Canadian media.”

Subsequently, PotashCorp and Agrium have merged to become Nutrien Ltd. Canada. In January 2018, the company indicated all exports from the Western Sahara would end by the end of 2018.

In October 2020, Western Sahara Resource Watch indicated that they have observed no vessels departing from Western Sahara to Nutrien plants in Canada or US since January, 2019. It would seem perhaps that Engler was correct that the potash seizure was an embarrassment to corporate Canada.

Perhaps the Canadian government needs to be reminded that Canadians and the world are watching, and sees Canada’s complicity in crossing “the red line” in blatant disregard for international law.

Perhaps Champagne needs to be reminded that Canada as a high signatory to the Fourth Geneva Convention is accountable under article one to ensure that the Convention is upheld in all circumstances.

This means taking actions, including economic and diplomatic measures, to condemn violations by other countries. It certainly does not include celebrating normalization between occupying powers and echoing U.S. endorsements of such agreements.

This is one more example of why the call by the Canadian Foreign Policy Institute for a review of Canadian foreign policy is much needed. Canada continues to show why it was not worthy of a seat on the United Nations Security Council, but does not seem to have heard the wake up call from Canadians or the international community.

Trumps Morocco Move Inviting Countries to Invide Each Other Accuracy.org