Canadian churches: Now is the time to speak up in regard Israel’s apartheid crimes 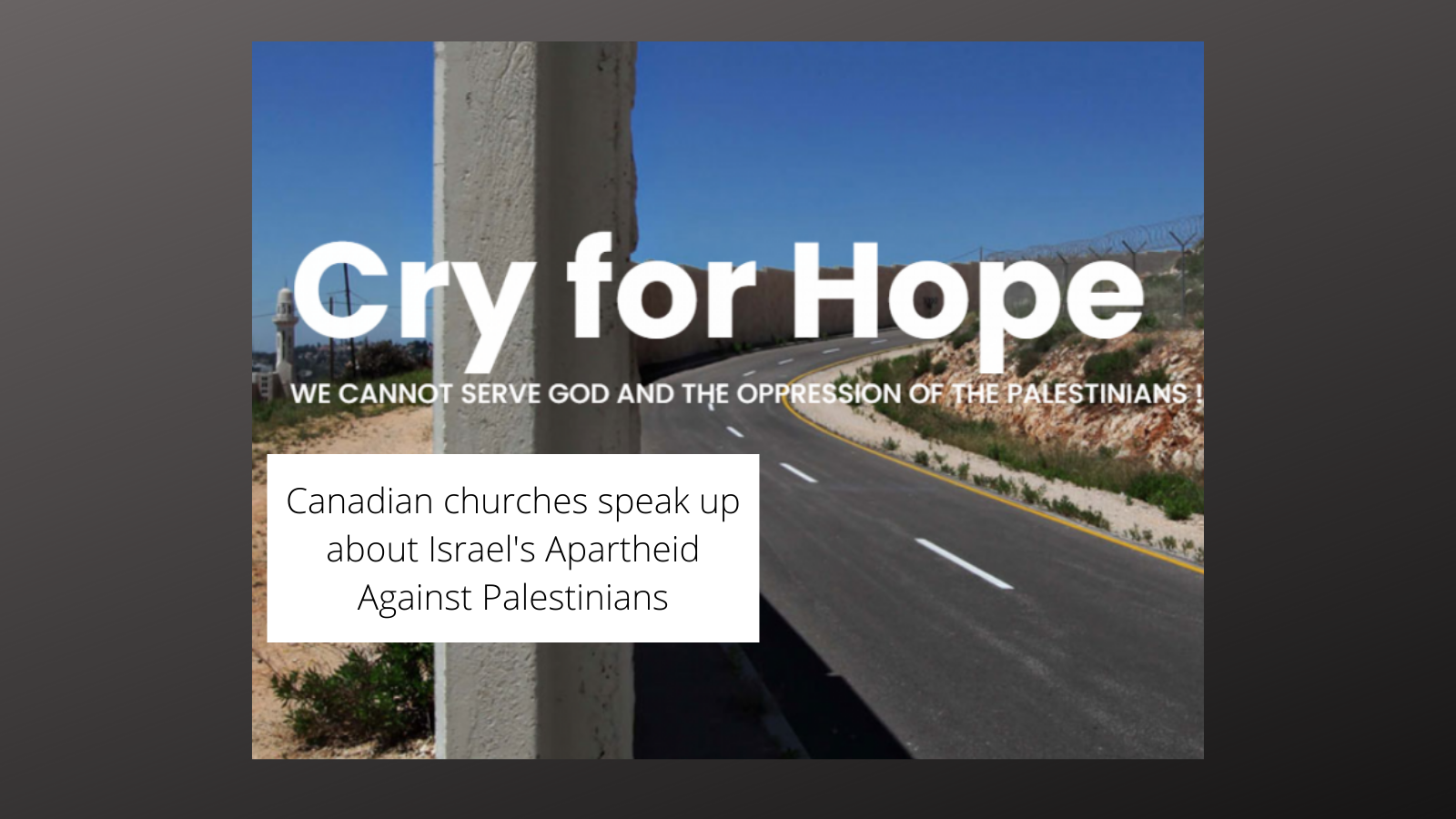 Take one minute to write to the Canadian churches and their leadership.

Send letter to the Canadian Council of Churches and its members.

Canadian churches: Now is the time to speak up in regard Israel’s apartheid crimes

Canadians can no longer close their eyes for the crimes against humanity being committed by apartheid Israel.

Canadian churches are called upon to take action to end Israel’s apartheid regime as they did with apartheid South Africa in the past.

Also, those wish to sign the Christians from Palestine “Cry of Hope” can do so HERE.

On February 1, 2022, the human rights group Amnesty International published a 280-page report titled “Israel’s apartheid against Palestinians: Cruel system of domination and crime against humanity” accusing Israel of committing the crime of apartheid.

The report says that “Since its establishment in 1948, Israel has pursued an explicit policy of establishing and maintaining a Jewish demographic hegemony.”

Amnesty also exposes the involvement of “almost all of Israel’s civilian administration and military authorities… in the enforcement of the system of apartheid against Palestinians across Israel, in the West Bank and Gaza,” as well as “against Palestinian refugees and their descendants outside the territory.”

In conjunction with the release of the report, Amnesty International has created a 90-minute self-paced, online course titled “Deconstructing Israel’s Apartheid Against Palestinians”.  It helps break down the legal arguments Amnesty used to conclude that Israel is currently committing the crime against humanity of apartheid. It can be found here for anyone who wants to deepen their understanding of how Amnesty came to their determination.

The Amnesty report comes after the following reports:

·   “A regime of Jewish supremacy from the Jordan River to the Mediterranean Sea: This is apartheid” published in January 2021 by Israeli human rights organization B’Tselem,  and

·     “A Threshold Crossed”  published in April 2021 by the New York-based group Human Rights Watch (HRW), which finds Israel guilty of committing “the crimes against humanity of apartheid and persecution” against the indigenous Palestinian people.

The Call from Christians in Palestine

Palestinians called out to the world in the 2009 Kairos Palestine “Moment of Truth: a word of faith, hope and love from the heart of Palestinian suffering.”

With this Kairos Palestine set in motion a global movement, rousing the churches to action and awakening civil society to the reality of Palestinian suffering.

“We are on the verge of a catastrophic collapse. This could be our last chance to achieve a just peace.” The call of the Palestinian Christians urged churches to:

Just Peace Advocates and others called on the United Church of Canada to take heed, but it took until November 2021, more than four years, for the largest Canadian reform denomination to consult and respond. The “In Support of Just Peace in Palestine and Israel: A Call to Costly Solidarity” report from the taskforce is a very disappointing report that did not support the use of the word “apartheid” and did not support BDS, although did support the right of people to practice BDS. Read more.

Cry for Hope from Palestine’s Christians

In 2020, Kairos Palestine made a call “Cry for Hope” to the international Christian community. This included affirming the Palestinians’ right to resist. Close to 25,000 people world wide have signed a petition, and worldwide Christian churches and organizations have been asked to endorse. In Canada, the churches have been silent with only “qualified” endorsements from the United Network for Justice and Peace in Palestine and Israel (UNJPPI), a KAIROS Canada staff with some unnamed church leaders from the United Church of Canada, Anglican Church of Canada and the Evangelical Lutheran Church in Canada, and an endorsement by Canadian Friends of Sabeel and Elizabeth May.

An April 2021 poll by B’Tselem, a leading Israeli human rights organization, found that 25% of Israeli Jews believe Israel is an apartheid state.

A July 2021 poll commissioned by the Jewish Electorate Institute shows 25% of US Jews and 38% of US Jews under the age of 40 agreed that “Israel is an apartheid state.”

Based on the two 2021 polls, B’Tselem’s report of January 2021, HRW’s report of April 2021 and Amnesty International’s report of February 2022, those who conflate Israel with Judaism and Jewishness can rightly be accused of being anti-Jewish, since only racists would blame any Jew for the state of Israel’s “crimes against humanity of apartheid and persecution” being inflicted on the indigenous Palestinian people.

Even during the recent memorial tributes for Archbishop Desmond Tutu, it would seem that the church leadership has gone out of its way to not mention the solid arity of Desmond Tutu for Palestinians. It seemed the Canadian churches did not join in the Archbishop’s voice that

‘I wish I could keep quiet about the plight of the Palestinians. I can’t!’
-Archbishop Desmond Tutu

“My family was forcibly displaced from Haifa in late 1948 and sought refuge in Lebanon.  Our family has been denied the right to return to the Holy Land since then in violation of United Nations General Assembly Resolution 194 of December 1948, because we are Christians. The more than six million Palestinian refugees who currently reside in Jordan, Syria, Egypt and Lebanon are also denied that inalienable right, which is also guaranteed by Article 13 of the Universal Declaration of Human Rights, because they are Christians and Muslims.

I appeal to your church, on behalf of the 7 million indigenous Palestinians who are victims of an apartheid regime, and the 6 million Palestinian refugees denied the right to return to their homeland, to act on Amnesty’s report and to demand that the Canadian government impose sanctions on the state of Israel until the apartheid regime in dismantled and equality, freedom and justice reigns in the Holy Land, between the Jordan River and the Mediterranean Sea.”

Even if Canadian Christians are not hearing the calls from their partners in Palestine, surely, they are hearing the voices from Israeli and international human rights organizations.

This action is co-sponsored by:

Note: One member of the Canadian Council of Churches, the Religious Society of Friends – Canadian Yearly Meeting (Quakers) has included information in regard to the Amnesty report through its Canadian Friends Service Committee (CFSC) e-newsletter and website