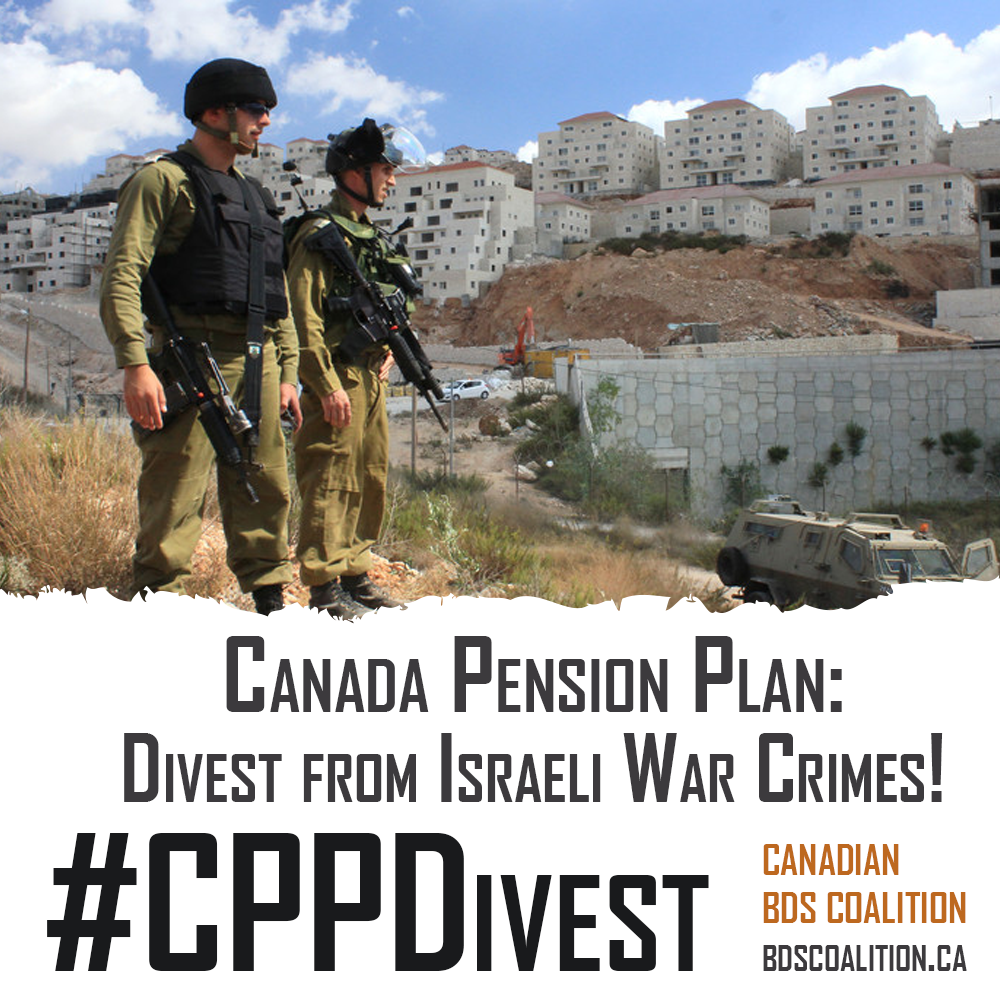 CPPIB had $524M (up from $513M in 2021) invested in 11 companies of the 112 companies listed on the UN Database as complicit with violations of international law. Investments in WSP, the Canadian headquartered company providing leadership to the Jerusalem Light Rail was $2953M (up from $2583M in 2021, and $1683M in 2020). In addition, the CPPIB is invested in 27 companies, (valued at $7016M) identified by AFSC Investigate as complicit with Israeli human rights and international law violations. CPPIB is also invested in two other companies of concern, ZIM Integrated Shipping Services Ltd, $3M, and Wix.com Ltd, $4M. In total, the CPPIB is invested in at least $10500M funds supporting Israeli war crimes.

Third CPPIB Annual report, with thousands of calls to CPPIB to divest

The Canadian Postal Workers Union, the American Friends Service Committee, Al-Haq, the Palestinian Canadian Congress, Independent Jewish Voices, the Canadian Foreign Policy Institute, Boycott from Within, World BEYOND War, and many other labour, faith, civil society, human rights and grassroots organizations joined with the Canadian BDS Coalition and its member groups in this call. See the full list of organizations below.

The message to the Canadian Pension Plan Investment Board was that Canada’s public pension plan needs to divest from companies identified by the UN as supporting Israeli war crimes.

See the full list of signatories and the letter to the CPPIB.

Thousands of Canadians say: CPPIB stop investing our public pension in war crimes. Over 5600 letters were sent during 2021 to the CPPIB and Federal Finance Minister.

The UN Database was released on February 12, 2020 in the Report of the United Nations High Commissioner for Human Rights (A/HRC/43/71) after the independent international fact-finding mission to investigate the implications of the Israeli settlements on the civil, political, economic, social and cultural rights of the Palestinian people throughout the oPt, including East Jerusalem. There are a total of 112 companies included on the UN list.

Based on CPPIB’s March 31, 2020 annual listing of equity holding, the CPPIB showed being invested in eight companies that are listed in the United Nations database. The United Nations (UN) Database of companies complicit with human rights violations. The CPPIB investments in the companies listed in the UN Database made up $97 M of $101,255 M of CPPIB Foreign Publicly-Traded Equity Holdings as of March 31, 2020.

Based on our review of the 2020-year end CPPIB’s Canadian public equity holding, the portfolio was dominated by one company. It seems unusual that any company would make up over 50 percent of Canadian investments in the CPPIB. This company, WSP Global, is a Canadian management and consulting firm that specializes in engineering projects. This company, according to Who Profits, is involved in the planning of the Israel railway system that crosses into the occupied West Bank and constitutes settlement infrastructure. The CPPIB investment in WSP Global was 21,064,000 shares with a market value of $1,683 million as of March 31, 2020. This one investment made up more than 53.6% of Canadian publicly traded equity holding. See Canadian Publicly-Traded Equity Holdings.

Commitment to Review by CPPIB

In March 2021, the CPPIB indicated they would do a review and be back in touch. So far, since then the CPPIB has remained silent.

The 2021 CPPIB Annual Report indicated increased investments in Israeli war crimes with at least 10 companies identified by the UN as complicit in war crimes.

The CPPIB investments in the companies listed in the UN Database made up $513 M of $134,226 M of CPP Foreign Publicly-Traded Equity Holdings as of March 31, 2021. USA companies, Airbnb and Expedia make up $481M of this investment, with the other nine entities valued at $32 M.

CPPIB 2022 investments in companies listed by the UN as complicit with Israeli war crimes include:

*Human Rights Council resolution 31/36 defined the database by reference to the listed activities compiled by the fact-finding mission in its report. (See the codes below)

Booking Holdings Inc. and Expedia Group Inc made up $472M (90%+) of the investment. During 2022, CPPIB divested from Delek Group Ltd – Delek US Holding Inc., (50 shares, $1M), E, G, Israel & USA but added First International Bank of Israel (33 shares, $2 M) E, F, Israel. All remaining holdings increased in shares and/or values, with all maintaining or increasing in fair value except for a drop in Booking Holdings Inc.

WSP continues to dominate the Canadian public equity fund, with $2953 Million of WSP holdings representing over 35% of the total portfolio. While the percentage of holdings has reduced from 54% in 2020, the total holding has increased with 2020 holdings being valued at $1683 Million and 2021 holdings at $2583 Million.

There are an additional 27 companies that CPPIB is invested in that have been deemed by AFSC Investigate to have substantial, ongoing, and intentional complicity in severe violations of human rights and international law related to occupied Palestine and the Syrian Golan.

(in Millions of dollars)

Included in the AFSC Investigate is several organizations that the Canadian BDS Coalition has ongoing campaigns underway.

Teva Pharmaceutical Industries Ltd. is the world’s largest generic drug manufacturer, and both companies are part of an oligopoly of companies who benefit from selling to the Palestinian captive market as verified by Who Profits, an Israeli research center.

Palantir Technologies Inc. provides their Artificial Intelligence (AI) predictive system to Israeli security forces, to identify people in occupied Palestine. Palantir provides the same mass surveillance tools to law enforcement agencies and police departments, circumventing warrant procedures. In the USA, Palantir has multi-million-dollar contracts with Immigration and Customs Enforcement (ICE) that aid in human rights abuses, like family separation and deportations. The Canadian BDS Coalition has a campaign related to the Royal Bank of Canada’s (RBC) over 2 M shares valued at over $56 M USD in Palantir holdings. This relationship flies in the face of the recently offered RBC option of a market-linked guaranteed investment certificate based upon environmental, social, and governance investigations which preclude investments in divisive and dangerous elements of society.

PayPal, described by AFSC Investigate as a global leader in online payments and money transfers. Discriminates against Palestinians in its services.

The letter to the CPPIB

The CPPIB is accountable to Parliament and to federal as well as provincial ministers who serve as the CPP stewards. The CPPIB is governed and managed independently from the CPP itself and operate at arm’s length from governments.

Along with the CPPIB, we bring this investment in war crimes to the Federal Minister of Finance.

-Zim Shipping specifically related to its role in supporting two way military trade between Canada and Israel, and in facilitating the shipment of products from illegally occupied Palestine and the Syrian Golan.

3. Review all portfolios for any other investments that are in violation of international law

4. Put in place a transparent process to ensure that companies are vetted for violations of human rights and international law.

The concerns that we raise are also in the broader context of ethical investment related to Canada’s public pension fund investment including in mining, fossil fuels, private health care, and other issues of justice and humanitarian concern.

We ask the CPPIB to take all steps necessary to ensure that the activities of all companies included in all of its portfolio are in compliance with international law governing war crimes. We remind you that in Canada, parties that are complicit in war crimes are liable to criminal prosecution under the Crimes Against Humanity and War Crimes Act,[1] including corporations.[2]

*Human Rights Council resolution 31/36 defined the database by reference to the listed activities compiled by the fact-finding mission in its report, which include:

B: The supply of surveillance and identification equipment for settlements, the wall and checkpoints directly linked with settlements.

E: The provision of services and utilities supporting the maintenance and existence of settlements, including transport.

F: Banking and financial operations helping to develop, expand or maintain settlements and their activities, including loans for housing and the development of businesses.

G: The use of natural resources, in particular water and land, for business purposes.