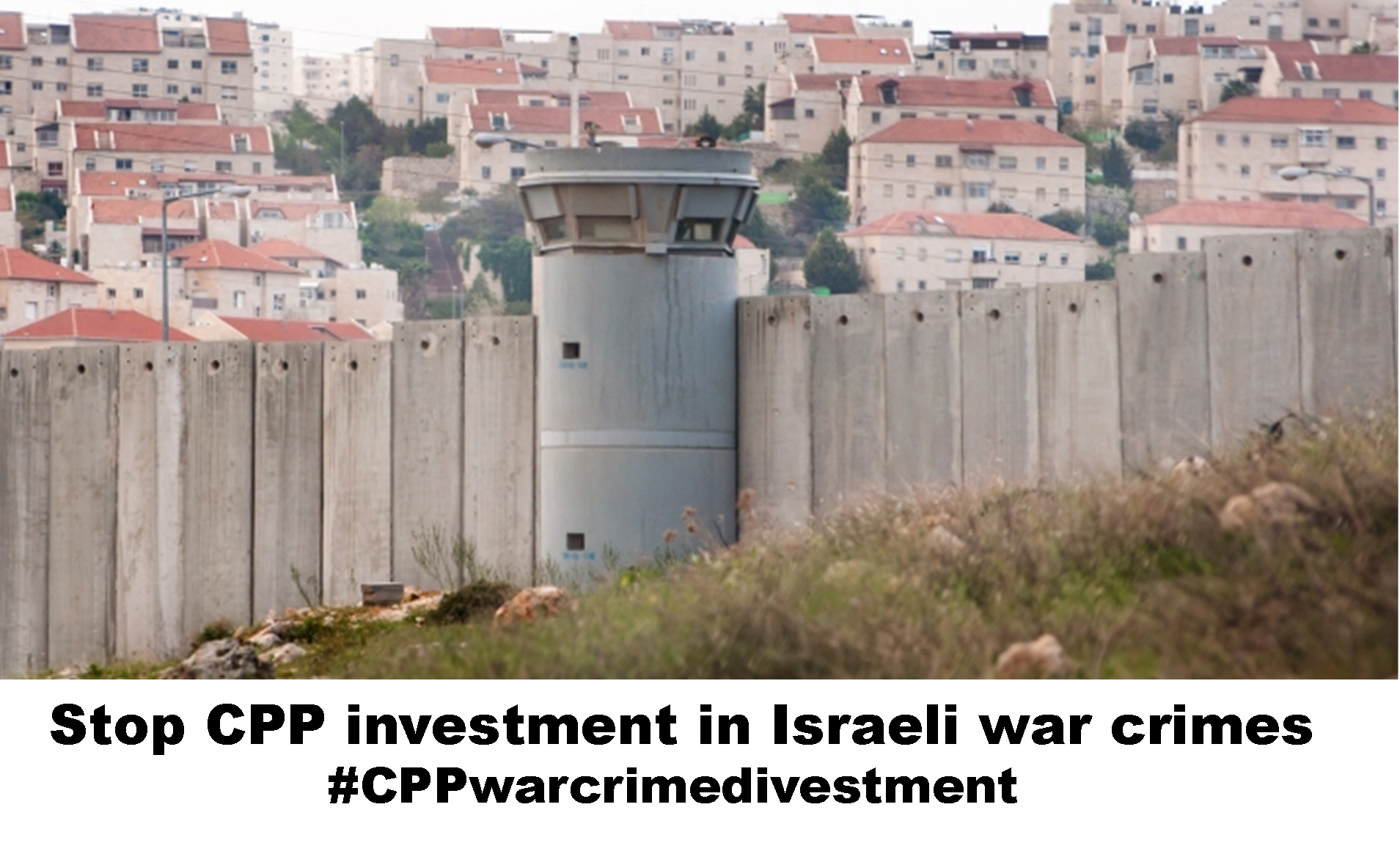 Over 200 have signed on to urge the CPPIB to divest from Israeli war crimes.

The Canadian Postal Workers Union, the American Friends Service Committee, Al-Haq, the Palestinian Canadian Congress, Independent Jewish Voices, the Canadian Foreign Policy Institute, Boycott from Within, World BEYOND War, and many other labour, faith, civil society, human rights and grassroots organizations join with Just Peace Advocates, the Canadian BDS Coalition and its member groups in this all. #CPPDivest

The message to the Canadian Pension Plan Investment Board is that Canada’s public pension plan needs to divest from companies identified by the UN as supporting Israeli war crimes.

The UN Database was released on February 12, 2020 in the Report of the United Nations High Commissioner for Human Rights(A/HRC/43/71) after the independent international fact-finding mission to investigate the implications of the Israeli settlements on the civil, political, economic, social and cultural rights of the Palestinian people throughout the oPt, including East Jerusalem. There are a total of 112 companies included on the UN list.

Based on CPP’s March 31, 2020 annual listing of equity holding, the CPP shows being invested in eight companies that are listed in the United Nations database.The United Nations (UN) Database of companies complicit with human rights violations.

The CPP investments in the companies listed in the UN Database make up $97 M of $101,255 M of CPP Foreign Publicly-Traded Equity Holdings as of March 31, 2020

Given that the aggregate investments are a very small proportion of the foreign traded portfolio, it seems it is an easy move for the CPP Investment Board to divest from companies that have been named as complicit in acts contributing to the maintenance of illegal settlements.

Based on our review of the CPP’s Canadian public equity holding, the portfolio is dominated by one company. It seems unusual that any company would make up over 50 percent of Canadian investments in the CPP.

This company, WSP Global, is a Canadian management and consulting firm that specializes in engineering projects.

This company, according to Who Profits, is involved in the planning of the Israel railway system that crosses into the occupied West Bank and constitutes settlement infrastructure.

The CPP investment in WSP Global is 21,064,000 shares with a market value of $1,683 million as of March 31, 2020. This one investment makes up more than 53.6% of Canadian publicly traded equity holding. See Canadian Publicly-Traded Equity Holdings.

This certainly begs the question as to why the CPP has invested half of the Canadian Publicly Traded equity holding of the CPP in one company; beyond this one that is involved in illegal settlement activities.

In this regard the CPPIB should take immediate steps to:

1. Divest from the UN data base funds, and to do a review to ensure no other investments are included now or into the future from the UN Database

2.Ensure that there are no companies from UN Database in the CPP Global Equity Indices

3. Put a transparent public process in place to ensure that these funds do not include any investments from the list going forward

5. Review the Canadian portfolio for any other companies that are in violation of international law

6. Put in place a transparent process to ensure that companies are vetted for violations of human rights and international law.

The concerns are raised in the broader context of ethical investment related to Canada’s public pension fund investment.

The CPPIB should take all steps necessary to ensure that the activities of all companies included in all of its portfolio are in compliance with international law governing war crimes.

Surely, the CPPIB would not want to have any companies within its portfolio that would be a violation of international law.

The CPPIB is entrusted with fiduciary trust of Canadian’s public pension plan and would be expected to undertake enhanced due diligence to ensure that its investments in conflict affected areas are in line with Canada’s responsibility under international and domestic law.

Read the full letter with signatories: