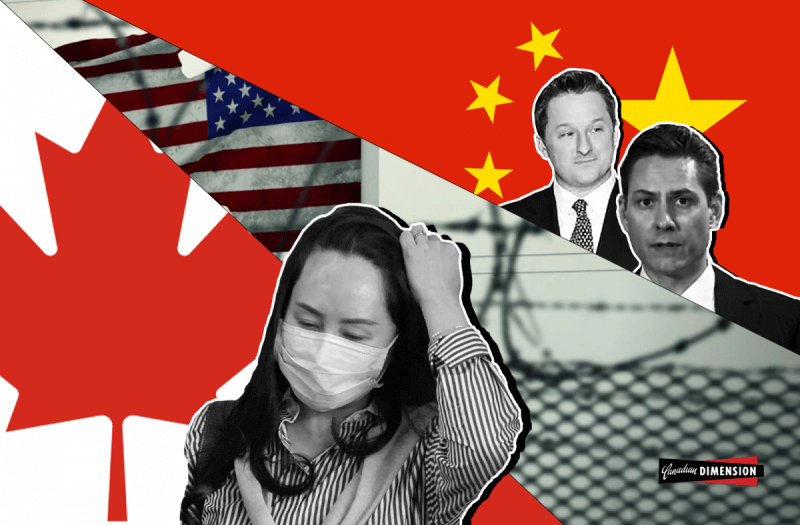 On Tuesday, December 1, 2020, the second anniversary of Meng Wanzhou’s detention, a coalition of peace organizations is organizing rallies across the country to FREE MENG WANZHOU.

There will be informational pickets at MPs’ offices, courthouses and other governmental sites across the country. These physically distanced and masked events will take place in Toronto, Vancouver, Ottawa, Hamilton, Regina, and Montréal.

Along with the rallies, a selfie poster has been produced for Canadians to pose with and send to their MP’s and post online. Additionally, Canadians are invited to email an Action Alert message to all Members of Parliament calling on them to press the government to end the extradition process of Meng Wanzhou. The Cross-Canada Day of Action follows on the heels of a widely watched and covered Zoom to Free Meng Wanzhou.

“On the two-year anniversary of her detention it is time to free Meng Wanzhou”, noted Ken Stone of the Hamilton Coalition To Stop The War. “The Canadian government should not engage in hostage diplomacy at the behest of the Trump administration”, added Stone.

Trump openly said he viewed Meng as a bargaining chip in his trade war with China.

“The case against Meng Wanzhou subverts international law”, said Bianca Mugyenyi, director of the Canadian Foreign Policy Institute. “By detaining Meng, Canada is legitimating both Washington’s unilateral sanctions against Iran and its bid to extend its legal authority over other sovereign jurisdictions.”

The alleged crime Meng committed was between her Chinese-based company, Huawei, and HSBC, a non-US based bank.

“Meng’s arrest is part of the US’ campaign to weaken Huawei Technologies, which could imperil 1300 well-paying Canadian jobs”, noted Stone. “By having Canada arrest Meng Wanzhou, the Trump administration has dragged Canada into its new cold war with China. Meng’s detention highlights the need for Canada to develop an independent foreign policy.”

The sponsors of the Cross-Canada Day of Action are World Beyond War, Canadian Peace Congress, Hamilton Coalition To Stop The War, Just Peace Advocates and Canadian Foreign Policy Institute.

The Hamilton Coalition To Stop The War (HCSW) is proud to co-sponsor a cross-Canada online panel discussion on the case of Meng Wanzhou, CFO of Huawei Technologies, who was arrested in Vancouver on December 1, 2018. The panel discussion will take place on Tuesday, November 24, 2020 at 7 pm EST with simultaneous translation from English to French and is part of a cross-Canada campaign to organize a Canadian day of action to free Meng on December 1, 2020, the second anniversary of her arrest.

The other sponsors of the panel discussion are the Canadian Foreign Policy Institute, World Beyond War, the Canadian Peace Congress, and Just Peace Advocates.

Registration for the panel is at https://actionnetwork.org/events/free-meng-wanzhou?clear_id=true. The panel will also be livestreamed on Facebook at World Beyond War’s Facebook page.