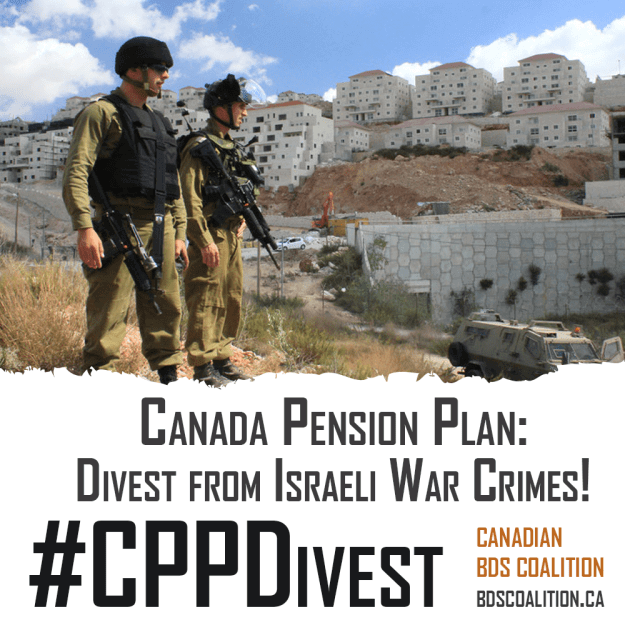 The  2021 CPPIB Annual Report  showed increased investments in Israeli war crimes with at least 10 companies identified by the UN as complicit in war crimes.

Note: CPPIB did divest from General Mills in 2021 but won’t confirm details.

CPPIB Investments in Companies Listed in the United Nations Database

The UN Database was released on February 12, 2020 in the Report of the United Nations High Commissioner for Human Rights (A/HRC/43/71) after the independent international fact-finding mission to investigate the implications of the Israeli settlements on the civil, political, economic, social and cultural rights of the Palestinian people throughout the oPt, including East Jerusalem. There are a total of 112 companies included on the UN list.  Based on CPP’s March 31, 20201 annual listing of equity holding, the CPP is invested in at least ten companies that are listed in the United Nations database.

UN Security Council resolution 2334 (2016) reaffirmed that settlements have no legal validity and constitute a flagrant violation under international law.

CPPIB 2021 investments in companies listed by the UN as complicit with Israeli war crimes include:

Subsequently,  letters were sent to the Canadian Pension Plan Investment Board (CPPIB).

*Human Rights Council resolution 31/36 defined the database by reference to the listed activities compiled by the fact-finding mission in its report, which include:

B: The supply of surveillance and identification equipment for settlements, the wall and checkpoints directly linked with settlements.

E: The provision of services and utilities supporting the maintenance and existence of settlements, including transport.

F: Banking and financial operations helping to develop, expand or maintain settlements and their activities, including loans for housing and the development of businesses.

G: The use of natural resources, in particular water and land, for business purposes.

Given that the aggregate investments are a very small proportion of the foreign traded portfolio, it seems it is an easy move for the CPP Investment Board to divest from companies that have been named as complicit in acts contributing to the maintenance of illegal settlements.

Based on our review of the CPP’s Canadian public equity holding, the portfolio is dominated by one company. WSP Global.

WSP Global, is a Canadian management and consulting firm that specializes in engineering projects. WSP according to Who Profits, is involved in the planning of the Israel railway system that crosses into the occupied West Bank and constitutes settlement infrastructure. The CPP investment in WSP Global is at over 21K shares with a market value that increased from March 31, 2020 of $1,683 million, to $2,583 M as of March 31, 2021.

Why has the CPPIB invested in this one Canadian firm, WSP so heavily? Beyond this one that is involved in illegal settlement activities.

We remind the CPPIB of the large divestments from public pensions in New Zealand and Norway earlier this year.

Norway’s $1.3 trillion sovereign wealth fund excluded Shapir Engineering and Industry Ltd and Mivne Real Estate KD Ltd. for their activities associated with Israeli settlements on the West Bank. The companies were excluded based on advice from the Council on Ethics “due to unacceptable risk that the companies contribute to systematic violations of individuals’ rights in situations or war or conflict,” the fund said in a statement.

We ask has the CPPIB conducted similar analysis of investments of their portfolios?

In this regard CPPIB needs as a start to divest from

There are many other companies that could be added to the list of companies, and we ask the CPPIB to undertake a full review.

CPPIB indicates it aspires to “integrate ESG factors” and acknowledges that “lack of engagement with ESG undermines long term sustainability” as well as brands and reputation “generate risk impacts beyond expected adjusted returns.”

On March 8, 2021, over 70 organizations along with dozens of individuals Canadian Pension Plan Investment Board about its investment in funds related to Israeli occupation of Palestine and the Syrian Golan Heights.

The CPPIB President/CAO and Board Chair have received thousands of letters during 2021 calling from them to divest from the UN listed companies and WSP; letters to which the CPPIB has not responded.

The CPPIB did indicate they were undertaking a view of these investments in March 2021, but no response with an update on this review has been provided despite the many requests from organizations and individuals.

The CPIB is accountable to Parliament and to federal and also provincial ministers who serve as the CPP stewards. The CPPIB is  governed and managed independently from the CPP itself, and operate at arm’s length from governments.

Now with the Trudeau cabinet announced, we also bring this to the attention of the Federal Minister of Finance.

3. Review all portfolios for any other investments that are in violation of international law

4. Put in place a transparent process to ensure that companies are vetted for violations of human rights and international law.

The concerns that we raise are also in the broader context of ethical investment related to Canada’s public pension fund investment including in mining, fossil fuels, private health care, and other issues of justice and humanitarian concern.

We ask the CPPIB to take all steps necessary to ensure that the activities of all companies included in all of its portfolio are in compliance with international law governing war crimes. We remind you that in Canada, parties that are complicit in war crimes are liable to criminal prosecution under the Crimes Against Humanity and War Crimes Act,[1] including corporations.[2]

The CPP investments in the companies listed in the UN Database make up $513 M of $134,226 M of CPP Foreign Publicly-Traded Equity Holdings as of March 31, 2021. USA companies, Airbnb and Expedia make up $481M of this investment, with the other nine entities valued at $32 M.

Given that the aggregate investments are a very small proportion (less than one percent) of the foreign traded portfolio, it seems it is an easy move for the CPP Investment Board to divest from companies that have been named as complicit in acts of military occupation and contributing to the maintenance of illegal settlements (aka “war crimes”)