The order will evict 30 people including 11 children, it include the Skafi, Al Qasim, Al Jaouni, and Al Kurd families. Each family is ordered to pay collective punishment in the form of punitive fines totaling 70,000 IS, the fees of settlers lawyers, and other expenses.

Consequences for the Palestinian families in Sheikh Jarrah

 Palestinian families in Sheikh Jarrah have been systematically deprived of the protections of the Fourth
Geneva Convention and fundamental human rights, such as the rights to return, freedom, equality and
non-discrimination, security, property, home, family and effective remedy.

 Over 100 persons, members of Palestinian refugee families who lost their homes in western Jerusalem
in 1948, have been evicted once more from their second homes in Sheikh Jarrah to make space for
Jewish settlers.

 Many more are at risk of forced eviction.

Israeli practices in Sheikh Jarrah are part of the Israeli policy of annexation and population transfer in
occupied East Jerusalem.

These practices contradict the UN Charter, are serious violations of international
humanitarian and human rights law, and result in war crimes.

o Israel is to stop these violations and make full reparation to the victims, including the Palestinian
refugee families in Sheikh Jarrah

o All states are to abstain from assisting these Israeli violations, and to cooperate in order to bring them
to an end – for example by freezing the assets of Jewish settlers.

o Private entities are to abstain from (business) involvement in illegal Israeli activities in occupied East
Jerusalem, such as those in Sheikh Jarrah.

The call to the international community

As the Civic Coalition for Palestinian Rights in Jerusalem, a consortium of Palestinian
civil society organizations committed to the practice and preservation of the rule of law,
international, humanitarian, and human rights law we call upon the international
community:

-To stop Israeli eviction of the Palestinian families in Sheik Jarrah

– To stop Israeli policy of forced displacement in occupied Jerusalem.

-All states abstain from their participation, assistance, and implicit condemning of
Israeli violations.

Recently, friends of Just Peace Advocates raised $1200 USD for the Civic Coalition for Palestinian Rights in Jerusalem. Thanks to the donors and @RussellTheRunner for your support of the legal defense work to defend the families in East Jersualem facing eviction.

If you wish to support this work please be in touch at info@justpeaceadvocates.ca

Read more about the Case of Sheikh Jarrah

Photo credit: A general view of East Jerusalem as Palestinians gather to protest Israel’s destruction in the area after a Friday prayer in Silwan neighbourhood in East Jerusalem on August 28, 2020 [Mostafa Alkharouf/Anadolu Agency] 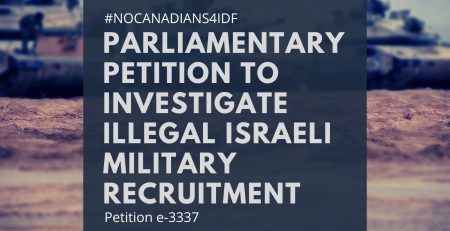 Take a minute citizens or residents of Canada to sign a petition to call upon the Minister of Justice to undertake a thorough investigation... read more

As we approach Palestinian prisoners day, Just Peace Advocates is pleased to have initiated this petition in support of... read more

Four Palestinian families have been ordered by an Israeli district court to leave their homes by May 2 or... read more

At the party’s ongoing convention delegates voted overwhelmingly in favor of the Palestine Resolution. It calls for “Ending all trade... read more