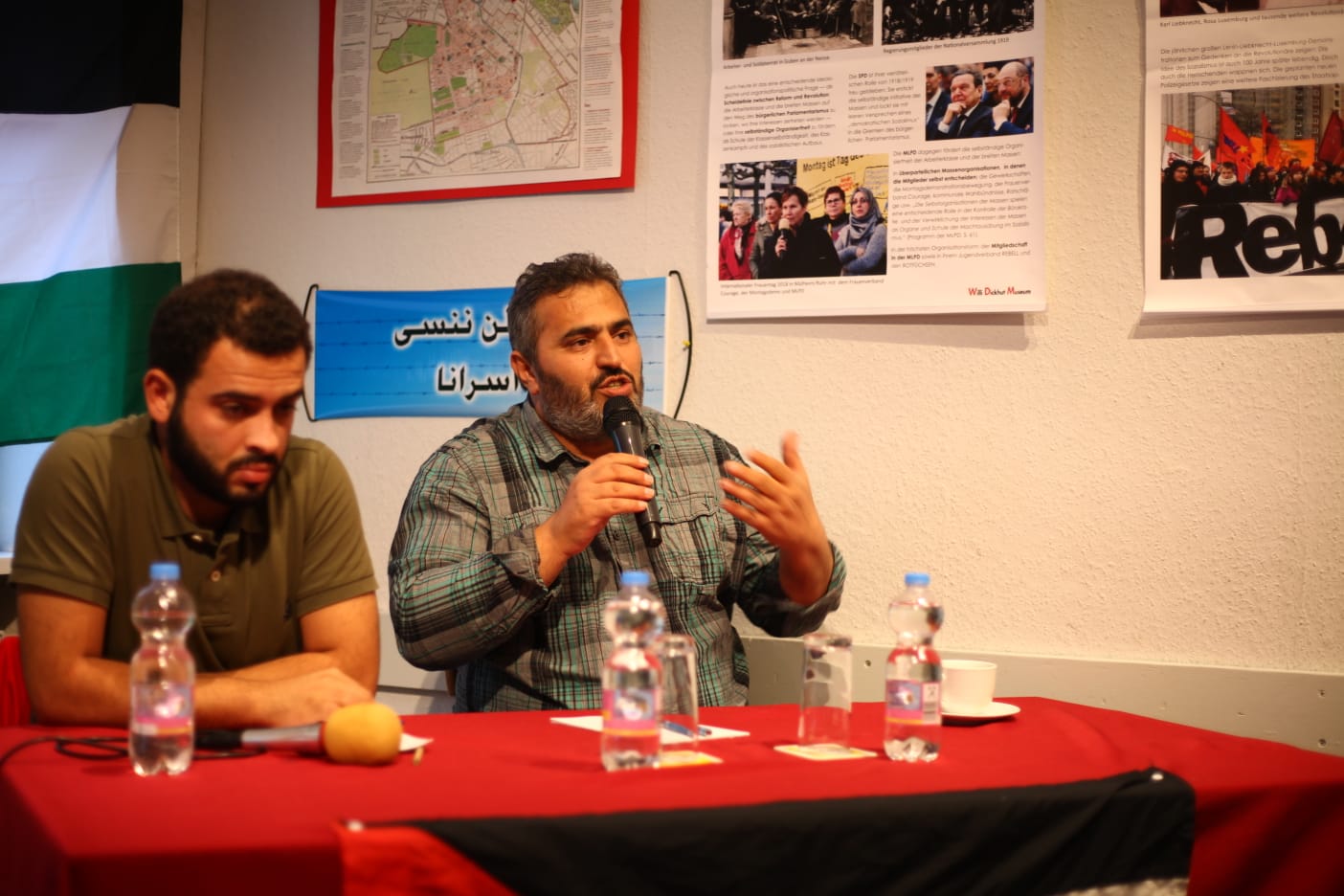 Khaled Barakat’s court case will be heard in a German court on March 11, 2022.

Barakat is fighting back against the Berlin immigration office’s imposition of a political ban on him, including barring him from participating in political and social events and activities, and their order that he be expelled from the country for four years.

Khaled Barakat, a Palestinian-Canadian writer has been subjected to a political ban in Germany since June 2019, after he was prevented by Berlin police from speaking at a community event on the USA’s so-called “Deal of the Century.”

When Khaled Barakat filed an urgent appeal against the political ban, he was threatened with up to a year in prison should he participate in political and social events, and activities.

Barakat was deported from Germany in August 2019 and appealed the action of the immigration office.

Just Peace Advocates sees Khaled Barakat’s case not only as an individual case of repression, but as part of the systematic attack on Palestinian organizing, political expression and thought in Germany as well as around the world.

Since Barakat’s expulsion, multiple Palestinians in Germany have been subjected to similar actions by the immigration office, targeting public and even private political expression supporting Palestinian rights. Most recently, Deutsche Welle, the German state broadcasting agency, fired Palestinian and Arab journalists for their social media posts about Palestine and opposition to the threats to freedom of expression in Europe.

However, there have been important victories when people fight back in court! Most recently, Germany’s highest administrative court ruled that the City of Munich could not deny public space to groups for programs because they advocate for boycott, divestment and sanctions against Israel. The Humboldt 3 fought back and won against attempts to criminalize them for protesting against an Israeli official at the Berlin university.

Thus, it is important we support this work in the ways we can.

Just Peace Advocates is concerned about Palestinian and pro-Palestinians that continue to face systematic attempts to silence them and strip them of access to public space in Germany and elsewhere around the world including in Canada.

We also note that there are currently 4,500 Palestinians detained by Israeli Occupation Forces without justice in Israeli military prisons. This includes women, children, university students, community leaders and politicians. The Israeli apartheid regime’s efforts to silence those who speak out for justice is meant to isolate Palestinian prisoners from their communities and from international support and solidarity. This is all part of a concerted effort to silence those who speak out naming the Israeli violations of human rights and international law.

Internationally, many organizations and activists have denounced the political ban imposed on Barakat indicating it is a severe attack on freedom of expression and fundamental human rights.

Read statements from organizations around the world.

We encourage you to support Khaled Barakat’s case through acts of solidarity.

Our support is important to fight back against political repression.

In Canada the German embassy is in Ottawa, but there are also consulates in Montreal, Toronto, Vancouver, Calgary, Edmonton, Halifax, Saskatoon, St. John’s and Winnipeg. Check out locations, phone numbers and emails HERE.

Phone and use this call-in script!

If you can support this imitative financially, click here to make a donation to support this important legal battle. All funds raised in excess of what is needed for this case will go to support other Palestinians and activists for Palestine facing similar repressive immigration cases.

See other actions of solidarity that you can take HERE.

Just Peace Advocates stands in support of Barakat and all who speak truth to power about Israel’s violations of international law and the human rights of the Palestinian people, in the homeland and the global diaspora.

Around the world, people of conscience are raising their voices in solidarity with Khaled Barakat and against the ongoing racist violations of Palestinian human rights in Europe, in Palestine, in Canada and around the world.

Photo: Khaled Barakat speaks in Berlin on 17 August 2019 after the end of the political ban (with Mohammed Khatib, Europe coordinator of Samidoun).