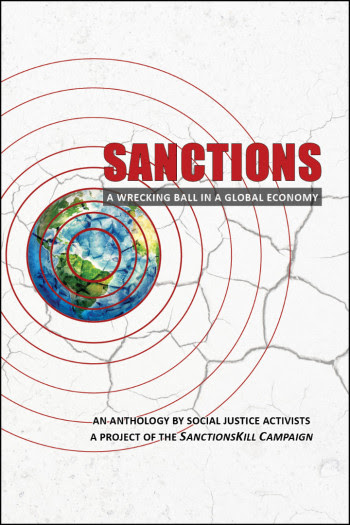 Canada sanctions well beyond the UN list, but fails to follow its own law in regard to sanctions on imperial violators such as Israel and India (see more information below)

Just Peace Advocates is pleased to join SanctionsKill Campaign and other cosponsors in presenting the following webinar:

Webinar
SANCTIONS: A Wrecking Ball in a Global Economy

Join a discussion of the latest developments in key regions of the world with several authors of the new anthology: SANCTIONS: A Wrecking Ball in a Global Economy.

Intensifying US sanctions, imposed on a third of humanity, are sending shock waves through the world economy. Now this brutal form of economic warfare on civilian populations is being contested. US dollar dominance is being challenged as the currency of global trade. Sanctions have boomeranged back on the US and EU countries with inflation, supply chain shortages, and a looming recession causing hardship at home. But by far the greatest burden is borne by 40+ sanctioned countries. The US response is doubling down on harsher sanctions. What are the implications?

REGISTER AND JOIN THE DISCUSSION – https://us06web.zoom.us/webinar/register/WN_BtyEl6xTRSKbJMcM40bFDQ

Presented by the SanctionsKill Campaign (https://sanctionskill.org)

Learn about Canada and its sanctions

Canada has sanctions and related measures in place against a number of countries, as well as sanctions against specific individuals and entities identified as being: (i) responsible for, or complicit in, extrajudicial killings, torture or other gross violations of internationally recognized human rights; (ii) responsible for, or complicit in ordering, controlling or otherwise directing significant acts of corruption; or (iii) associated with terrorist activities, including with the Taliban, ISIL (Da’esh) and Al-Qaida.

Canada has sanctions on 22 countries currently, although one of those is Ukraine as relates to Russia.  12 of these are sanctioned by the UN, and Canada sanctions through its UN Act, although in several cases (Haiti, Iran, North Korea, and South Sudan these sanctions also include SEMA)

10 additional countries beyond those that the UN sanction, are sanctioned by Canada including: Belarus, Myanmar, Nicaragua, China (specific to Xinjiang), Syria, Russia (and related Ukraine as deemed violated by Russia), Venezuela, and Zimbabwe.

According to the Canadian government website, Canada has imposed sanctions in relation to the following countries:

As well, according the Canadian government website, Canada has implemented mechanisms to prevent the concealment and transfer of funds or assets used to finance terrorism. These allow specified measures to be applied to listed terrorist entities.

The Special Economic Measures Act enables “the Government of Canada to take economic measures against certain persons in circumstances where an international organization of states or association of states of which Canada is a member calls on its members to do so, a grave breach of international peace and security has occurred, gross and systematic human rights violations have been committed in a foreign state or acts of significant corruption involving a national of a foreign state have been committed.” Specific regulations are enacted regarding specific entities.

The Security Council has used its Article 41 powers under the UN Charter to impose sanctions 30 times since it first established a mandatory sanctions regime on Southern Rhodesia in resolution 232 (1966). Currently, 15 sanctions regimes are in force, with the 751 Somalia regime dating back to resolutions 733 (1992) and 751 (1992) while the 2140 Yemen regime established in resolution 2140 (2014) is the most recent.  To see more. Also, to read more detail.

Canadian Law as it related to Israel and India as occupiers

International Law: Under Article 1 of the Fourth Geneva Convention, all High Contracting Parties (which includes Canada), are required to take action to ensure respect for the Convention “in all circumstances.”

Domestic Law: Under the Special Economic Measures Act, the Canadian government can impose sanctions when “gross and systematic human rights violations have been committed in a foreign state.”

In regard to Palestine:

On October 23, 2019, University of Western Ontario law professor Michael Lynk said in his presentation to the United Nations General Assembly (UNGA) as Special Rapporteur for the Occupied Palestinian Territory that “United Nations reports have stated that war crimes may have been committed by Israel during its various military operations in Gaza, [and] multiple and systematic human rights violations have been credibly documented by the United Nations and by international, Israeli and Palestinian human rights defenders.”  The Special Rapporteur reminded the UNGA that he had “determined previously that the occupation itself has become illegal, given its flagrant violations of the foundational principles of the modern laws of occupation.”

In October 2019, Professor Lynk, then UN Special Rapporteur stressed the need for the international community to hold Israel accountable, and that

“scholars have identified three principal purposes of countermeasures and sanctions to:

Michael Lynk told the UNGA that “in line with Common Article 1 of the Geneva Conventions, the Articles of Responsibility of States and Article 25 of the Charter of the United Nations” that all measures necessary be taken “including countermeasures and sanctions, to ensure respect by Israel, and all other relevant parties, of their obligations under international law to end the occupation.”

Canadians agree, as indicated in a 2017 EKOS poll indicated that two-thirds of Canadians indicated support for sanctions on Israel.

In regard to India:

Read civil society’s call on the Canadian government from 2020.

Canada has responsibility under both international and domestic law to hold Israel accountable. This includes following it own SEMA law whereby:

Under the Special Economic Measures Act, Canada puts sanctions in place on states for, or complicit in, extrajudicial killings, torture or other gross violations of internationally recognized human rights.