The CBC continues to insist Palestine is against CBC language standards 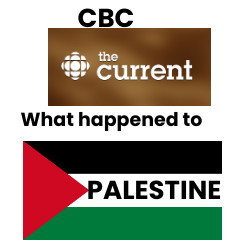 You can join the 2K+ who have written the CBC by sending a letter, chosing if you wish to customize it.

An initial response came several days ago from the National Audience Service department of the CBC. It was quite frankly, offensive, continuing to protest Palestine does not exist.

While more thorough than earlier responses, Mr. Hambleton still insists that Palestine is not within the CBC lanaguage standards. See Mr. Hambleton’s response below.

We doubt Mr. Hambleton nor the CBC has heard the end of this.

Via email to the 2,000+ people who wrote the CBC in regard to its deletion of Palestine followed by apology for using the word Palestine.

You are receiving this email because you all took the time to email either Ombudsman’s office or me directly about concerns you had about the position held by CBC News when it comes to referring to the Palestinian Territories. You all expressed degrees of disappointment and frustration that CBC News does not refer to this area as “Palestine.”

As Director of Journalistic Standards, the Editor in Chief Brodie Fenlon asked me to respond, and is included in this response.

First let me also recognize and respect the importance this issue is for you, and I am well aware of the vigorous, heartfelt, and often emotional debates that lie beneath the relationship between Israel and the Palestinians. On both sides.

I am happy to provide you with more background to illustrate the degree and seriousness with which we consider language on this issue (and any other issue for that matter).

Before I do that though, I would like to push back gently on the assertion many of you had that CBC News does not report comprehensively on Palestinian issues.

If you are a regular consumer of CBC News,  I am sure you would have seen that we have devoted significant time, and resources over the past decades uncovering and reporting on the lives, politics, difficulties and triumphs of the Palestinians both inside the Palestinian territories, Israel proper, and here in Canada.

In equal measure, we have also provided coverage of the Israeli perspective. This is the role of a responsible news organization.

I recognize that I will not likely change your view or sway your feelings, and that you still willl feel the Palestinian perspective is not reflected to your satisfaction, and I regret that – but I am hopeful that you will come away somewhat reassured by the fact that CBC News takes thiis matter very seriously and is meticulous in ensuring balance and fairness whenever a story emerges involving Palestinians and Israelis.

Let me then reiterate for you here in more detail the guidelines which concern you.

I would like to stress that our guidelines refer to references to a sovereign state of “Palestine” which does not formally exist currently.

We certainly quote people who talk about Palestine, we do interviews about books with Palestine in the title and so forth.  The word is not “banned” nor has it been censored  as so many of you have alleged.

Palestine vs. Palestinian territories — There is no modern country of Palestine, although there’s a movement to establish one as part of a two-state peace agreement with Israel. So do not refer to Palestine or show a map with Palestine as a country. Use the term “pro-Palestinian” instead of “pro-Palestine” when referring in generic ways to Palestinian supporters. Areas under the control of the Palestinian Authority are considered Palestinian territories: Fatah-run West Bank and Hamas-run Gaza Strip. The terms Palestinian territories and occupied territories are not synonymous. The former includes the Gaza Strip, where Israel no longer maintains a permanent military presence. The latter includes the Golan Heights, which Israel and Syria are at odds over. In November 2012, the United Nations voted to grant “non-member observer state” status to Palestine. We can accurately mention this in stories when relevant. But the UN does not grant nationhood, and it remains premature to call Palestinian territories the country of Palestine. When making references to historical Palestine, use clear language (e.g., “British Palestine” is the accepted term for the British Mandate of Palestine, which administered the region between 1920 and the birth of Israel in 1948).

occupied territories — This term conventionally refers to Israeli military occupation of the West Bank and East Jerusalem. It also technically applies to the Golan Heights (taken from Syria during 1967). While context generally makes the meaning clear, avoid lumping the Golan Heights into stories about the Israeli-Palestinian conflict. The adjective “occupied,” used by the United Nations, is more meaningful to our audience than “disputed,” since it underscores military control over the region. Avoid referring to the Gaza Strip as occupied without attribution, since Israel declared an end to its occupation of that region in 2005. Palestinians argue that the occupation continues, since Israel still controls the airspace, seafront and virtually all movement into or out of the region. For this reason, it’s preferable to refer to the end of Israel’s permanent military presence in the Gaza Strip rather than an end to its occupation, since the former is factual while the latter’s meaning is debated.

It may also be worth noting that Global Affairs Canada does NOT use the proper noun “Palestine” in its overview of the Israeli-Palestinian conflict (last updated last year):

Finally, to the question about other areas of the world where sovereignty is in dispute. Each one of these situations is unique, and we have a separate language guide entry for each of them outlining the various specific considerations that our journalists need to bear in mind when reporting on them.

I appreciate that you all feel strongly about this, but there has been no change in recent years of the facts on the ground that would lead CBC News to change its guidelines as they stand now.

Thank you again for reaching out to CBC News.