Towards A Nuclear Free World 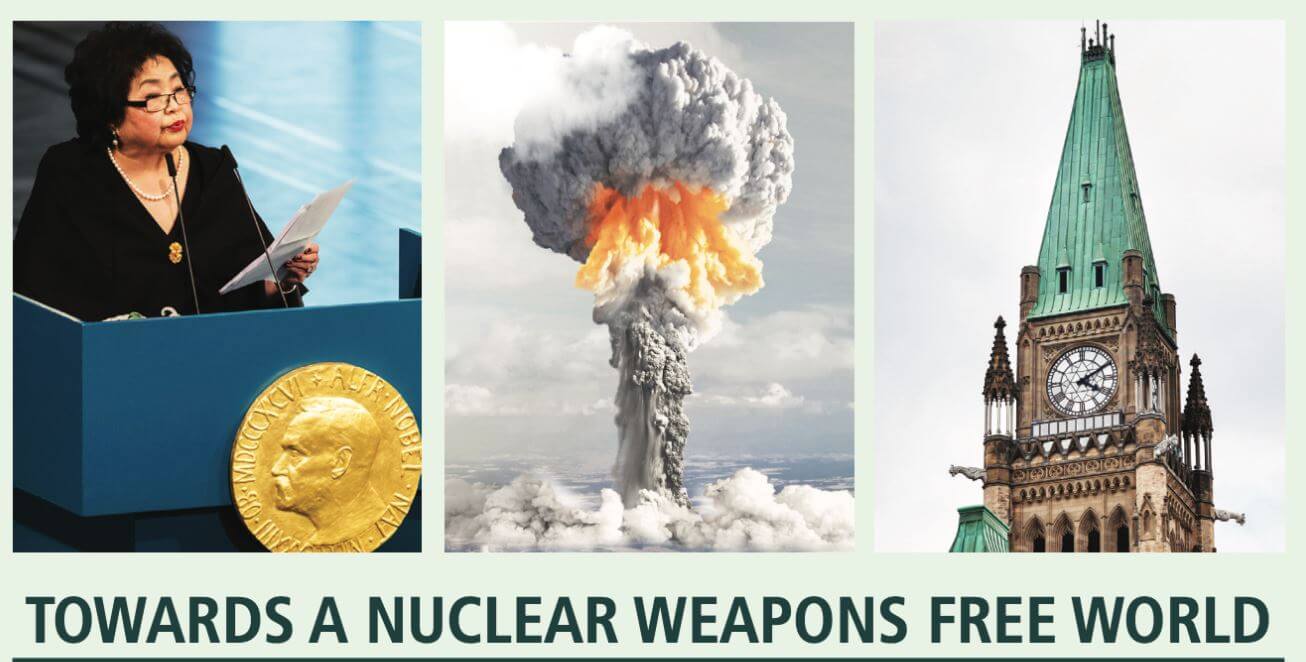 Just Peace Advocates was pleased to join with the large network of organizations and individuals who joined to call for “a Nuclear Free World” and condemn Canada’s failure to sign the multilateral treaty for nuclear disarmament that came into force on Jan. 22.

The United Nations Treaty on the Prohibition of Nuclear Weapons (TPNW) wasratified by over 50 countries and signed by more than 80 countries. However 30 countries of the North Atlantic Treaty Organization (NATO) including Canada have refused to join the TPNW.

The TPNW bans the development, production, storage, transportation, threat of use and use of nuclear weapons. The treaty delegitimizes these indiscriminate weapons of mass destruction and makes them illegal under international law.

The following material was included in the Hill Times.

November 17, 2020, Montreal — Recently the 50th country ratified the United Nations Treaty on the Prohibition of Nuclear Weapons, which means the accord will enter into force on January 22.

“The UN Nuclear Ban Treaty reaching its ratification threshold brought tears of joy,” said Setsuko Thurlow who co-accepted the 2017 Nobel Peace Prize on behalf of the International Campaign to Abolish Nuclear Weapons (ICAN). “The Trudeau government needs to stop opposing this treaty seeking to stigmatize and criminalize nuclear weapons”, added the survivor of the atomic bombing of Hiroshima. “It needs to get on the right side of history and immediately sign the Treaty on the Prohibition of Nuclear Weapons.”

“The Trudeau government says it believes in ridding the world of nuclear weapons, a feminist foreign policy and an international rules-based order, and yet it refuses to sign a UN Nuclear Ban Treaty that advances these three stated principles”, noted Bianca Mugyenyi, director of the Canadian Foreign Policy Institute.

To ask a question during the live event or to request an interview please contact info@foreignpolicy.ca

World renowned intellectual Noam Chomsky is marking a momentous day in the struggle to abolition nuclear weapons with a talk calling on Canada to sign the UN Nuclear Ban Treaty. As the Treaty on the Prohibition of Nuclear Weapons (TPNW) enters into force on Friday, January 22 Chomsky will speak on “The Threat of Nuclear Weapons: Why Canada Should Sign the UN nuclear ban treaty”.

“The Trudeau government says it wants to see the abolishment of nuclear weapons but it’s refusing to sign the Treaty on the Prohibition of Nuclear Weapons”, said Chomsky. “Their position is incoherent.”

“The entering into force of the UN Nuclear Ban Treaty represents an important step in the struggle to abolish these ghastly weapons”, explained the world renowned intellectual. “Nuclear weapons remain a serious threat to humanity and to lessen that danger Canadians should press their government to sign the UN Nuclear Ban Treaty,” concludes Chomsky.

The webinar is part of a series of actions pressuring the government to adopt the TPNW. A coalition of 90 groups is placing an ad in The Hill Times this week calling for a parliamentary debate on signing the UN Nuclear Ban Treaty and three former Disarmament Ambassadors will brief Senators. On January 21 representatives of the NDP, Bloc Québécois and Greens will hold a press conference demanding Canada sign the TPNW. Recently former prime minister Jean Chrétien, deputy prime minister John Manley, defence ministers John McCallum and Jean-Jacques Blais, and foreign ministers Bill Graham and Lloyd Axworthy signed a statement supporting the UN Nuclear Ban Treaty.

“The Trudeau government says it believes in ridding the world of nuclear weapons, a feminist foreign policy and an international rules-based order yet it refuses to sign a UN Nuclear Ban Treaty that advances these three stated principles”, noted Bianca Mugyenyi, director of the Canadian Foreign Policy Institute. “The hypocrisy is too much.”

To ask a question during the event please contact:  Bianca Mugyenyi 514 436 7629 or info@foreignpolicy.ca