Write a letter to Prime Minister Trudeau: Say “No” to a second extradition of Hassan Diab 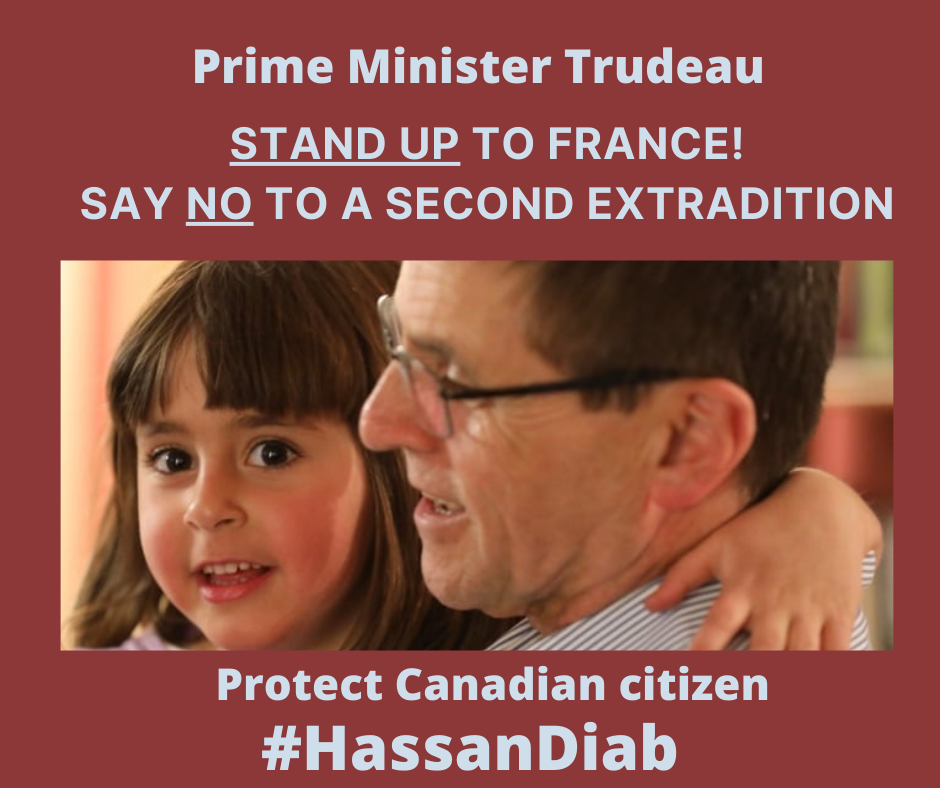 Take one minute to write to Prime Minister Trudeau with copies to responsible Ministers.

Let Prime Minister Trudeau know you call on him and his government to honour his words by taking action now to end Dr. Hassan Diab’s long and devastating ordeal.

Dr. Diab is an innocent man who must be rescued from the offensive rulings of the French judiciary. Join with many other Canadians in demanding that the Canadian government:

1)   give an iron-clad assurance that it will reject any future request from France to extradite Dr. Diab a second time; and

2)   urge France to put an immediate end to this continuing miscarriage of justice.

“I think, for Hassan Diab, we have to recognize first of all that what happened to him never should have happened. This is something that obviously was an extremely difficult situation to go through for himself and for his family, and that’s why we’ve asked for an independent external review to look into exactly how this happened and make sure that it never happens again.”

This video/poem by Michelle Weinroth, asking Prime Minister Trudeau to intervene and protect Hassan, will be included with the letter you send.

Dr. Diab is the Canadian citizen who, at the behest of France, was sought for extradition based on unfounded allegations of involvement in the bombing of a Paris synagogue in 1980. He was pursued and harassed by the RCMP in 2008. Arrested on November 13th of that year, denied bail, and jailed in the disreputable Ottawa Carleton Detention Centre, he was then released on bail in April 2009, only to be placed under the most draconian house arrest conditions. In 2014, after prolonged and suspect hearings, his extradition to France was sealed. He spent over three years, largely in solitary confinement without charge or trial, in the Fleury-Mérogis prison and was finally released in 2018. French investigating judges found no evidence to justify a trial. He also had a powerful alibi: he was not in Paris at the time of the bombing (October 1980), but in Beirut, writing exams. In 2018, his return to Canada from France was breaking news.

“I think, for Hassan Diab, we have to recognize first of all that what happened to him never should have happened […] and make sure that this never happens again.”

While Dr. Diab’s nightmare was suspended for three years, its spectre returned on January 27th, 2021 when France’s Appeals Court ruled that Dr. Diab should stand trial even as evidence against him had been entirely discredited. This was a shocking turn of events, not least because the Court of Appeal’s ruling was riddled with egregious misrepresentations, logical inconsistencies, and wild fabrications. Worse still, on May 19, 2021, France’s top court (Cour de cassation) upheld the Court of Appeal’s baseless ruling.

This flagrant miscarriage of justice is clearly of a political nature. France has the wrong man. But under pressure from the victims’ lobby and given the state’s position on terrorism, French authorities will not concede ground, nor admit error. The Hassan Diab case requires a political solution. Dr. Diab’s support committee is thus appealing to the Canadian government to save him from the fate of a second extradition and from the claws of the French judiciary. To this end, it is reaching out to social justice groups and Canadians at large, requesting that they offer every ounce of support they can.

Listen to the Video of Press Conference on January 25, 2022: Comments on France Setting Trial Date

KEEP UP TO DATE AT:

Other actions that can be taken

Tweet this video/poem and tag @JustinTrudeau. Ask him to intervene and protect Hassan Diab.

2) Send a Postcard to PM Trudeau

Postcards addressed to PM Trudeau are available at Octopus Books, 116 Third Avenue, Ottawa. Please drop by Octopus Books to sign a postcard, and get extra postcards to share with friends.

If you are not in the Ottawa area, you can order postcards by sending an email to diabsupport@gmail.com indicating your postal mailing address and the number of postcards you’d like to receive, and we will gladly mail postcards to you.

Please send another  letter to PM Trudeau asking him to honour his words and put an end to Dr. Hassan Diab’s long and troubling ordeal. You may write your own letter, or send the online letter at: