Write to Jagmeet & the NDP team: Reminder of 2018 commitment for Palestinian child detainees 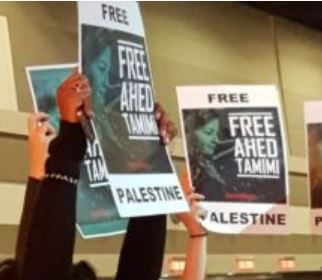 Take a minute. Write a letter to Jagmeet Singh and the New Democratic Party.

To say we’ve noticed that Palestine’s children are not a priority for you!

An emergency resolution from the February 2018 NDP convention has been ignored. Meanwhile the second child in Israeli military detention has contracted Covid-19.

Defence for Children International Palestine (DCIP) has indicated that a 14-year-old Palestinian boy detained by Israeli forces from occupied Palestine in mid-September tested positive for COVID-19 after spending two days in Israeli custody.

The “emergency” resolution that was to go to the NDP executive for decision making, when the clock expired at the last NDP Convention in February 2018 read:

Ending ill-treatment and enhancing due process for Palestinian child detainees.

Where, Ahed Tamimi, a 17 year-old Palestinian girl, was arrested from her home at night on December 19 by Israeli forces and her trail began in an Israel court on February 13, and her persecution in Israeli’s military court system provides a clear example of how Israeli military law systematically denies basic due process rights to Palestinian child detainees.

Therefore, be it resolved that the NDP call on the Government to urge Israeli authorities to fully comply with the Convention on the Rights of the Child by ensuring basic due process rights and the absolute prohibition against torture and ill-treatment.

The Executive of the NDP worked with DCIP and those who had brought the DCIP, NO WAY TO TREAT A CHILD campaign to Canada in 2017, on this resolution, and it was one of six emergency resolutions that were be discussed under EMERGENCY resolutions at Convention. When the clock ran out at Convention, the indication was these were deferred to the NDP executive for consideration. When inquiring over the months that followed, Just Peace Advocates was told by the NDP President that the resolution just had to be considered before the next Convention. With the Convention pushed off, this further delayed “the emergency” consideration! Requests for a status update this fall have not been responded to.

Let’s go a step further, and urge the NDP to call for the end of military law for all children under occupation. #FreePalestine #KashmirWantsFreedom

A bit more about the NDP and Palestine:

A year ago during the federal election, Jagmeet Signh answered questions asked as part of #IVotePalestine by the Canada Palestine Association-Vancouver. In his answers, the NDP leader indicated support of all aspects of the BDS National Committee call (BDS call). However, subsequently, Signh has distanced himself from support for Palestine to the point of being only one of two NDP elected members of parliament who did not sign the letter this summer condemning further annexation of occupied Palestine. He along with Randall Garrison, the NDP critic of defense and vice chair of the Canada-Israel Interparliamentary Group (CAIL) have not signed the call for sanctions should Israel annex further the occupied territory as part of the “deal of the century.”