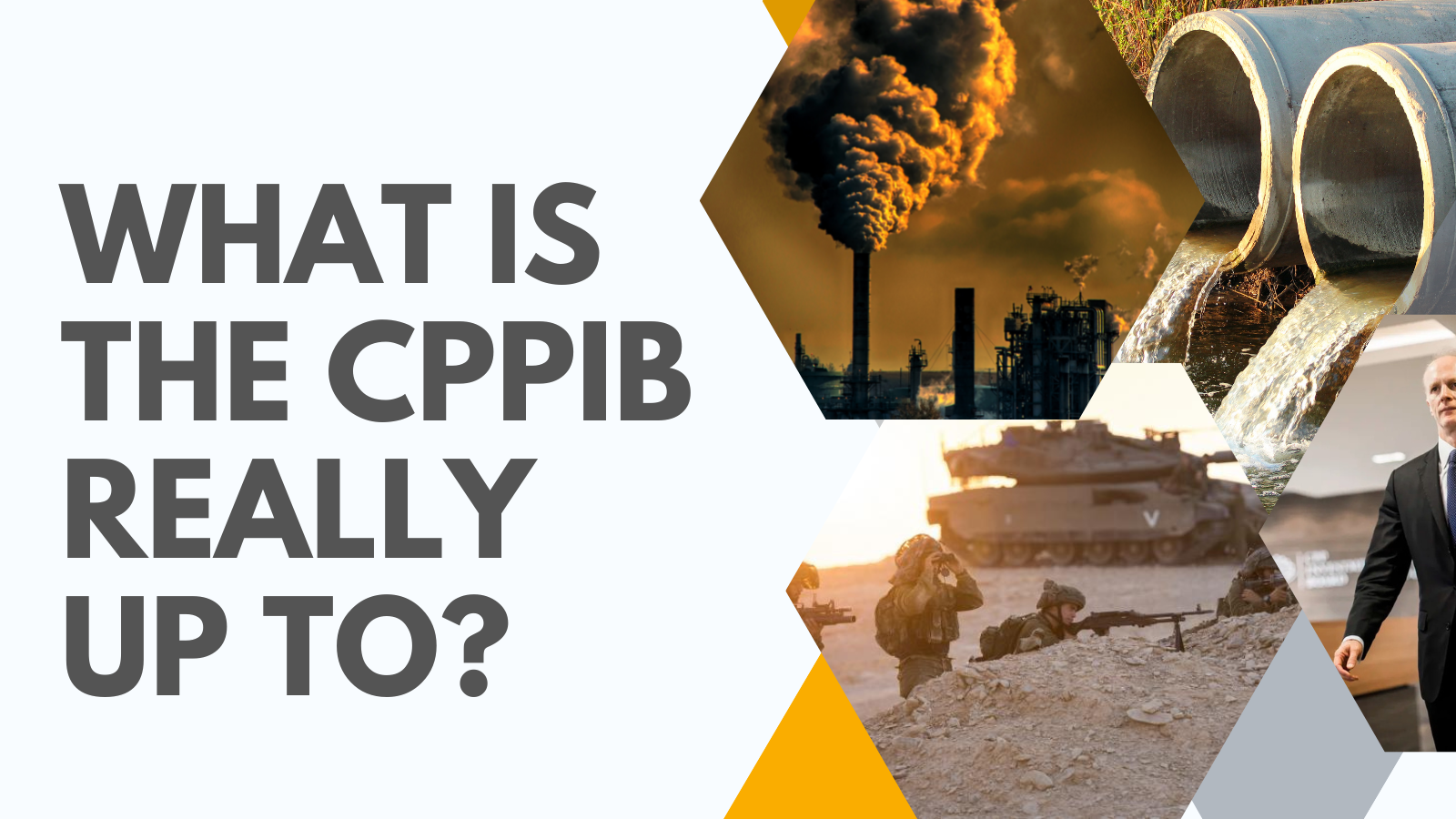 In anticipation of the Canada Public Pension Investment Board’s (CPPIB) biennial public meeting this fall, we take this opportunity to call out its choice to invest in the destruction of the planet and human rights year after year. We will not stand idly by while the retirement savings of over 21 million Canadians finance the climate crisis, war, and international human rights violations in the name of “building our financial security in retirement.” In reality, these investments destroy our future rather than secure it. It’s time to divest from companies that profit from war, violate human rights, conduct business with oppressive regimes, damage vital ecosystems, and prolong the use of climate-wrecking fossil fuels– and to re-invest in a better world instead.

Act now and attend the CPPIB’s 2022 stakeholder meetings, beginning on October 4th in Vancouver and moving eastward until October 28th in Fredericton. These public meetings, held every two years, are one of the only opportunities Canadians have to hold the CPPIB accountable for its investment decisions. Register here

Those interested in coordinating with others in your own area to attend these meetings, please fill out this short survey.

Organizations that wish to endorse this statement can do so here.

According to the Canada Public Pension Investment Board Act, the CPPIB is required “to invest its assets with a view to achieving a maximum rate of return, without undue risk of loss.” Further, the Act requires the CPPIB “to manage any amounts transferred to it… in the best interests of the contributors and beneficiaries….” The best interests of Canadians go beyond maximizing short-term financial returns. The retirement security of Canadians requires a world that is free from war, that upholds Canada’s commitment to human rights and democracy, and that maintains a stable climate by limiting global heating to 1.5 degrees Celsius. As one of the largest asset managers in the world, with over half a trillion dollars in assets under management, the CPPIB plays an outsize role in whether Canada and the world builds a just, inclusive, zero-emissions future, or descends further into economic turbulence, violence, repression, and climate chaos.

Unfortunately, the CPPIB has chosen to focus only on “achieving a maximum rate of return” and ignored “the best interest of the contributors and beneficiaries.”

As it currently stands, many of the CPPIB’s investments themselves do not benefit Canadians. These investments not only help keep industries, such as the fossil fuel industry, afloat, they also stifle progress and provide social licence to destructive forces around the world. Legally, the CPPIB is accountable to federal and provincial governments, not contributors and beneficiaries, and the disastrous implications of this are becoming increasingly obvious.

What is the CPP invested in?

Note: all figures in Canadian Dollars.

Because of its size and influence, the CPPIB’s investment decisions play a major role in how quickly Canada and the world can transition to a zero-carbon economy while continuing to grow Canadians’ pensions amidst a worsening climate crisis. The CPPIB acknowledges that climate change poses significant risks for its investment portfolio and the global economy. However, the CPPIB is a massive investor in fossil fuel expansion and a significant owner of fossil fuel assets, and does not have a credible plan to align its portfolio with Canada’s commitment under the Paris Agreement to limit global temperature increase to 1.5°C.

In February 2022, the CPPIB announced a commitment to achieve net-zero emissions by 2050. The CPPIB deploys sophisticated tools and processes to assess and manage the financial risks of climate change and in recent years has dramatically increased its investments in climate solutions, with ambitious plans to invest more. For example, the CPPIB has invested over $10 billion in renewable energy alone, and has invested in solar, wind, energy storage, electric vehicles, green bonds, green buildings, sustainable agriculture, green hydrogen and other clean technologies all over the world.

Despite its sizable investments in climate solutions and efforts to centre climate change in its investment strategy, the CPPIB continues to invest billions of Canadian retirement dollars in the fossil fuel infrastructure and companies fueling the climate crisis– with no intention to stop. As of July 2022, CPPIB had $21.72 billion invested in fossil fuel producers alone. The CPPIB has explicitly chosen to be overinvested in oil and gas companies, increasing its shares in these climate polluters by 7.7%  between Canada’s signing of the Paris agreement in 2016 and 2020. And the CPPIB doesn’t just provide financing to and own shares in fossil fuel companies– in many cases, Canada’s national pension manager owns oil and gas producers, fossil gas pipelines, coal- and gas-fired power plants, gasoline stations, offshore gas fields, fracking companies and rail companies that transport coal. Despite its commitment to net-zero emissions, the CPPIB continues to invest in and finance fossil fuel expansion. For example, Teine Energy, a private oil and gas company 90%-owned by the CPPIB, announced in September 2022 that it would spend up to US$400 million to buy 95,000 net acres of oil and gas producing land in Alberta, as well as oil and gas producing assets and 1,800 km of pipelines, from Spanish oil and gas company Repsol. Ironically, the money will be used by Respol to pay for its move into renewable energy.

The CPPIB’s management and board of directors is also deeply entangled with the fossil fuel industry. As of March 31, 2022, three of the 11 current members of CPPIB’s Board of Directors are executives or corporate directors of fossil fuel companies, while 15 investment managers and senior staff at the CPPIB hold 19 different roles, and previously held 4 different roles, with 12 different fossil fuel companies. Another three CPPIB Board Directors have direct ties to the Royal Bank of Canada, Canada’s largest financier of fossil fuel companies. And a long–time member of CPPIB’s Global Leadership team left her job in April to become the president and CEO of the Canadian Association of Petroleum Producers, the primary lobby group for Canada’s oil and gas industry.

According to its 2022 annual report, the CPPIB currently holds shares in nine of the world’s top 25 arms companies totaling $770 million according to their market value in 2022, including. As of March 31 2022:

While CPPIB invests Canada’s national retirement savings in weapons companies, victims of war and civilians around the world pay the price for war while these companies profit. For example, more than 12 million refugees fled Ukraine this year, more than 400,000 civilians have been killed in seven years of war in Yemen, and at least 20 Palestinian children were killed in the West Bank since the start of 2022. Meanwhile, weapons companies in which the CPPIB is invested are raking in record billions in profits. Canadians who contribute to and benefit from the Canada Pension Plan aren’t winning wars – arms manufacturers are.

For more information, check out the military-industrial complex divestment action toolkit from World BEYOND War.

The CPPIB Invests at least 7 percent of our national pension fund in Israeli war crimes. Read the full report.

The CPPIB’s investments in WSP, the Canadian-headquartered company providing project management to the Jerusalem Light Rail, was nearly $3 billion as of March 2022 (up from $2.583 million in 2021, and $1.683 million in 2020). On September 15, 2022, a submission was made to the UN High Commissioner for Human Rights asking that WSP be investigated to be included in the UN database.

The UN Database was released on February 12, 2020 in the Report of the United Nations High Commissioner for Human Rights after the independent international fact-finding mission to investigate the implications of Israeli settlements on the civil, political, economic, social and cultural rights of the Palestinian people throughout the occupied Palestinian territories, including East Jerusalem. There are a total of 112 companies included on the UN list.

In addition to the companies identified by the United Nations and WSP, as of March 31, 2022, the CPPIB is invested in 27 companies, (valued at over $7 billion) identified by AFSC Investigate as complicit with Israeli human rights and international law violations.

How are these issues related?

Our pension funds are meant to help us be secure and independent in our retirement. Investing in companies whose activities make the world less secure, whether through aggravating the climate crisis or directly contributing to militarisation, ecological destruction, and human rights violations starkly contradicts this purpose. What’s more, the global crises that are made worse by the CPPIB’s investment decisions reinforce and exacerbate one another.

For example, war and preparations for war don’t just require billions of dollars that could be used to prevent and prepare for ecological crises; they are also a major direct cause of that environmental damage in the first place. Canada, for example, is planning on purchasing 88 new F-35 fighter jets from Lockheed Martin, the largest military contractor (by sales) in the world, for a price tag of $19 billion. F-35s burn 5,600 litres of jet fuel per hour of flying. Jet fuel is worse for the climate than gasoline.The Canadian government’s purchase and use of 88 fighter jets is like putting 3,646,993 additional cars on the road each year – which is over 10 percent of registered vehicles in Canada. What’s more, Canada’s current stock of fighter jets have spent the past few decades bombing Afghanistan, Libya, Iraq and Syria, prolonging violent conflict and contributing to massive humanitarian and refugee crises. These operations had a deadly toll on human life and have nothing to do with ensuring the retirement security for Canadians.

While the CPPIB claims to be dedicated to “the best interests of CPP contributors and beneficiaries,” in reality it is extremely disconnected from the public and operates as a professional investment organization with a commercial, investment-only mandate.

In April 2019, Member of Parliament Alistair MacGregor noted that according to documents published in 2018, “the CPPIB also holds tens of millions of dollars in defence contractors like General Dynamics and Raytheon.“ MacGregor added that in February 2019, he introduced Private Member’s Bill C-431 in the House of Commons, which would “amend the investment policies, standards and procedures of the CPPIB to ensure that they are in line with ethical practices and labour, human, and environmental rights’ considerations.” Following the October 2019 federal election, MacGregor introduced the bill again on February 26, 2020 as Bill C-231.

Despite years of petitions, actions, and public presence at the CPPIB’s bi-annual public meetings, there has been a serious lack of meaningful progress to transition towards investments that invest in the best long-term interests by bettering the world rather than contributing towards its destruction.