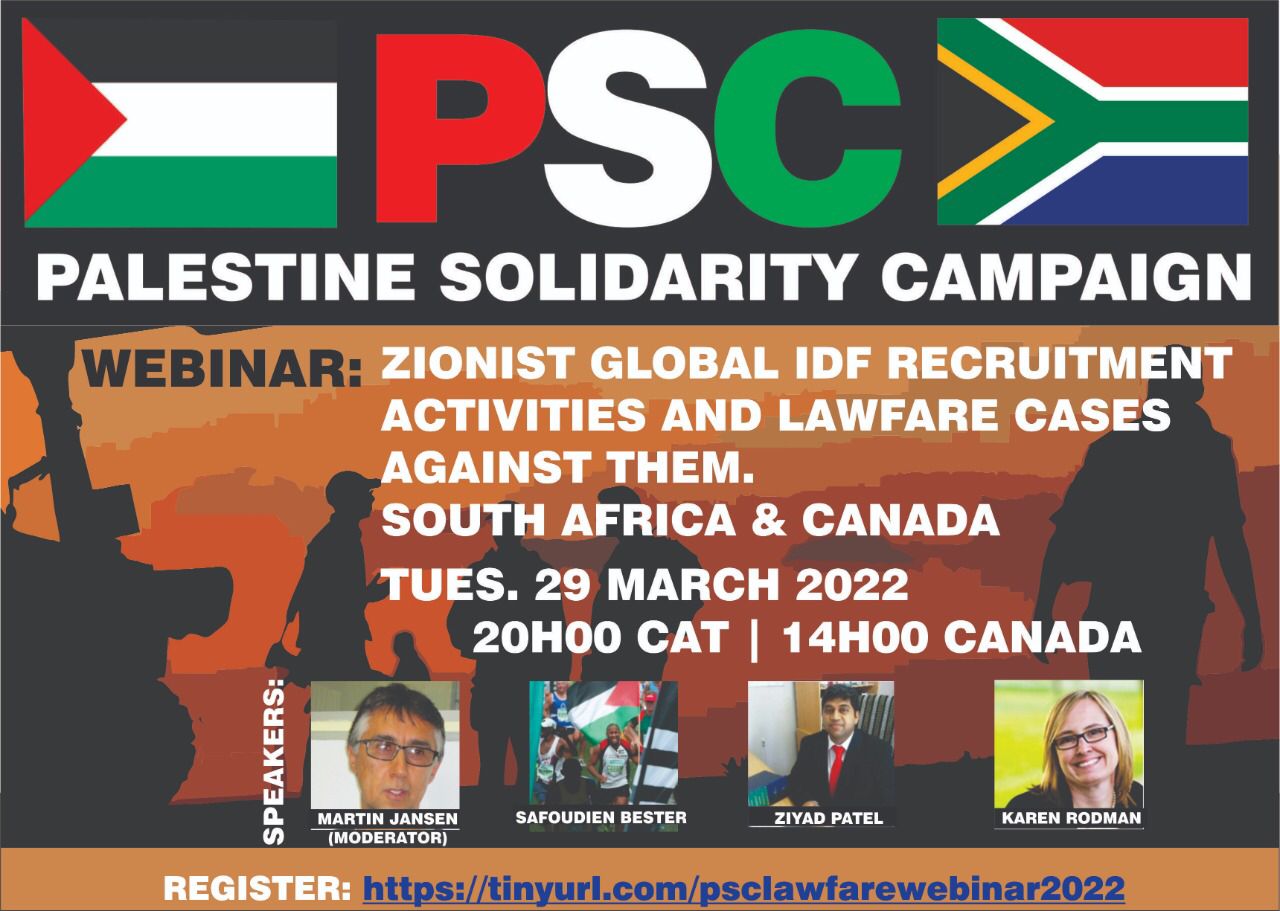 “The Israeli Defense Force has a global network of financiers and enablers who recruit young Zionist impressionable Jews for service in the IDF. These institutions and recruits across national jurisdictions are implicated in terrorism and are perpetrating war crimes and crimes against against humanity whilst sustaining the status quo of unlawful Israeli apartheid practices and imposing settler colonial policies through the IDFs belligerent military occupation in the OPTs and the Gaza Strip.” Let them face justice..

Karen Rodman’s comments including links & more information about the #NoCanadians4IDF

Thank you Martin. I am pleased to join with Sabourdien and Ziyad, and congratulate all those involved in your comprehensive case and this important  webinar.

I am glad to be able to speak about our parallel campaign #NoCanadians4IDF. Greetings to all those joining for this important discussion from South Africa, Canada and elsewhere.

I am joining you today from the Kawartha Lakes area of Canada which is situated on the 1818 Treaty 20 land that is the indigenous home of the Haudenosaunee, the Anishinaabe, the Mississauga and the Wendat people. As we consider the zionist project to colonize Palestine, we also remember that Canada was founded on and continues to be party to ongoing violence against the indigenous people of Turtle Island.

It is from this context that several Canadian organizations came together in 2020 to consider how they could hold our government accountable under its own law to stop illegal Israeli military recruiting in Canada.

It had been noticed that the Israeli consulate in Toronto has advertised on several occasions that they would have an IDF representative available for personal appointments for those wishing to join the IDF, not just those who are required to do mandatory service.

Specifically in 2019, the Israeli consulate in Toronto announced that “an IDF representative will conduct personal interviews at the Consulate on November 11-14. Young people who wish to enlist in the IDF or anyone who has not fulfilled their obligations according to the Israeli Defense Service Law are invited to meet with him.”

In November 2019, an action was held at then Foreign Affairs Minister Freeland’s office with a letter delivered to her staff about this concern, and over 100 letters were sent to the Canadian government in this regard by concerned citizens, but no response was received. That year as part of the recruiting call from the Israeli government, there were also Israeli military on campus at York University in Toronto causing concern from students on campus.

The Canadian Foreign Enlistment Act states at Section 11 specifically that:

“Any person who, within Canada, recruits or otherwise induces any person or body of persons to enlist or to accept any commission or engagement in the armed forces of any foreign state or other armed forces operating in that state is guilty of an offence.”

The only exception would be the recruitment of Israeli citizens who are not Canadian citizens.

It was on this basis that research was undertaken to look at the activities to recruit or otherwise induce people to accept commission or engagement in Canada for the Israeli armed forces.

From this, on October 19, 2020 a formal legal complaint was made to the Justice Minister who is also the Attorney General of Canada, David Lametti, calling for a thorough investigation to be undertaken of those who have facilitated this recruiting for the Isreali military, and if warranted that charges be laid against all those involved in recruiting and encouraging recruiting in Canada for the Israeli military.

With the legal formal complaint, an open letter from more than 170 Canadians as well as others including Noam Chomsky and Roger Waters was included with their request to also investigate this recruitment taking place in Canada.

Not only had the Israeli consulate advertised that it facilitates enlistment in a foreign military, but evidence suggested it had arranged for Israeli soldiers and veterans to be present in schools, summer camps and other venues in Canada with the goal of inducing people to enlist.

The Montreal lawyer, John Philpot, who submitted the legal complaint indicated that “The law banning foreign recruitment must be enforced” and “Canada must pursue the possibility of laying charges on those encouraging  people in Canada to enlist in the Israeli military.”

The same day as the legal complaint was made, an exclusive article was published by Marie Vastel in Le Devoir, a daily Montreal newspaper, and at a news conference the next day Ms. Vastel asked Minister Lametti directly about this.

In response to her question Justice Minister Lametti stated that diplomats must respect Canadian law. He said the issue will be referred to the authorities: specifically the police and the Public Prosecutor for investigation. Later that day, a second article written by Vastel, reporting on this, was on the front page of the Montreal Daily Le Devoir.

This led to 1500 letters being sent within a couple days to Lametti, along with other media and social media coverage.

Along with Israeli diplomats and one Isreali Colonel,  the complaint named former Canadian Ambassador to Israel, Deborah Lyons who had held a widely publicized reception in Tel Aviv on January 16, 2020, celebrating Canadians serving in the IDF. The complaint indicated that Ms. Lyons’ actions appear to encourage the recruiting of Canadians into the IDF. And if so, she may be held criminally liable under section 21 (1) (c) of the Criminal Code for encouraging or abetting the commission of the offence of enlistment. The complaint indicated an investigation should be undertaken to verify if charges should be laid and, above all, to ensure that Canadian authorities respect the law against foreign recruitment.

This event was in fact a pizza party, in which “Israel in Canada” tweeted a great night! Canadian Embassy staff having a #pizzaparty with #Canadian lone soldiers in the IDF.

It should be noted of course that Israeli military recruitment in Canada is a longstanding practice. Yves Engler has provided research that indicates the most important and well-documented recruitment took place during the ethnic cleansing of Palestine in the Nakba. “Representatives from Haganah, the primary pre-state Zionist military force, recruited 300 experienced Canadian soldiers to serve in Israel’s ranks.” This was “a decade after Canada had adopted the Foreign Enlistment Act to stop Canadians from fighting against General Franco’s fascist forces in Spain.”

After inquiring with Lametti’s office about which police the matter was being referred to, on November 3, 2020, the evidence was also provided directly to the RCMP (or Royal Canadian Mounted Policy) by attorney John Philpot. On November 19, the RCMP indicated to Philpot that the matter was under active investigation.

On January 3, 2021, new evidence was provided to the RCMP Commissioner, regarding illegal Israeli military recruitment in Canada.

Chat: Read about evidence provided to the RCMP https://www.justpeaceadvocates.ca/evidence-delivered-to-rcmp-for-their-investigation-into-illegal-recruitment-for-israeli-military/

Following this, another 1,000 letters were sent to RCMP with copies to Minister Lametti.

In early 2021, five Canadian organizations worked to continue to move the campaign forward. At that time over 50 organizations from across Canada, Quebec and internationally signed on in support of this campaign. Organizations are still welcome to endorse the campaign and we will put the link into the chat.

We will also put the link so you can view the January 2021 webinar  as it gives even more details.

Chat: webinar can be viewed at https://www.justpeaceadvocates.ca/say-no-to-illegal-military-recruiting-in-canada/ or on our You Tube channel in English or French https://www.youtube.com/channel/UCs5gPlJaL96PJ3OrgjQ2Gjg

In April 2021, a New Democratic Member of Parliament, Mathew Green, sponsored a Parliamentary Petition initiated by Rabbi David Mivasair that saw 8,000 signatures received. This support is unheard of for Parliamentary Petitions that have been initiated regarding Palestine. This was a call upon the Minister of Justice to undertake a thorough investigation of those who have recruited or facilitated recruiting for the Israel Defense Forces, and, if warranted, lay charges. This petition unfortunately was not presented in the House as the writ was dropped and a federal election called for the fall of 2021.

Chat: see petition at https://petitions.ourcommons.ca/en/Petition/Details?Petition=e-3337 and more info at https://www.justpeaceadvocates.ca/matthew-green-sponsors-parliamentary-petition-to-investigate-illegal-israeli-military-recruiting/

After the new Session of Parliament post-election the petition was reinitiated this time garnering 1200 signatures. That  petition has just closed, and we wait for its presentation in Parliament and the Canadian government response.

Last May,  Rabbi Mivasair also gained attention for the concern. Rabbi Mivasair had been present when red tempera paint was poured on the steps of the Israeli consulate in Toronto to make visible the blood being spilled by Israel in Gaza and across Palestine.  The water-based paint was washed away and the steps cleaned within half an hour.

However, the Israeli consul general stated to the media that “the painting of the steps was an act of vandalism”.  Subsequently, two Toronto police detectives drove to Mivasair’s home in Hamilton to arrest him in the late evening of the following day. This led to much Canadian and international media coverage and this also served to get more interest in signing the Parliamentary Petition. More recently the charges against Rabbi Mivasair have been dropped by the Crown.

In June 2021, a third letter writing campaign was initiated–this time including the Revenue Minister as well as Justice Minister and the RCMP. This noted that along with violations to the Foreign Enlistment Act, the Canada Revenue Agency guidelines state that say “supporting the armed forces of another country is not” a charitable activity. Almost 3,000 letters were sent with another 1,000 in the fall after the election.

Media has been a key part of the work, with some mainstream media coverage in Canada and internationally, and a number of press releases sent to our media list of about 2500 contacts. Research was important to this such as information from writer and researcher Yves Engler that has documented among other things that “Registered Canadian charities raised over a quarter billion dollars for Israel-focused projects in 2018 so it’s likely that millions of dollars in taxpayer subsidized donations support the IDF.”

On July 30, 2021 a formal legal complaint was submitted to the Canada Revenue Agency (also called the CRA) concerning the charitable status of the Canadian Zionist Cultural Association (CZCA). The complainants a Canadian Palestinian refugee along with an Independent Jewish Voices member asked the CRA to investigate whether the CZCA’s operations and activities comply with its regulations for registered charities and, if not, to revoke the group’s status.  The complaint details that organization’s support of the Israeli military in contravention of CRA guidelines for registered charities.

Chat: you can learn more about this including view a webinar that was held, media coverage and see Al-Haq’s support of this complaint https://www.justpeaceadvocates.ca/cra-czca/

Almost 2,000 letters were sent specifically to the Minister of National Revenue and to Canada Revenue Agency officials regarding this concern.

In January 2022, an addendum to the July 2021 complaint was provided to the Canada Revenue Agency. The documents confirmed that CZCA finances various organizations supporting the Israeli military. As one example,  the CZCA had funneled hundreds of thousands of dollars to “Scholarships/mentorships for Duvdevan”, which is a unit that operates in the occupied West Bank. Duvdevan commandos often disguise themselves as locals and regularly kill Palestinians.

Chat:  See details including the letter writing https://www.justpeaceadvocates.ca/canada-should-remove-charitable-status-from-groups-funding-the-israeli-army/ and https://actionnetwork.org/letters/write-letter-to-canada-revenue-agency-cra-regarding-illegal-subsidies-to-israeli-military/

Over 6,000 additional letters were written to the CRA and Canadian government in early 2022. With close to 15,000 letters in total sent, and close to 10,000 signatures on Parliamentary Petitions it seems clear Canadians are concerned about this issue and the need to uphold Canada’s own laws.

Watch for more next steps in Canada, and we are pleased to be able to connect with others internationally including in South Africa who are doing this ever critical work for justice.