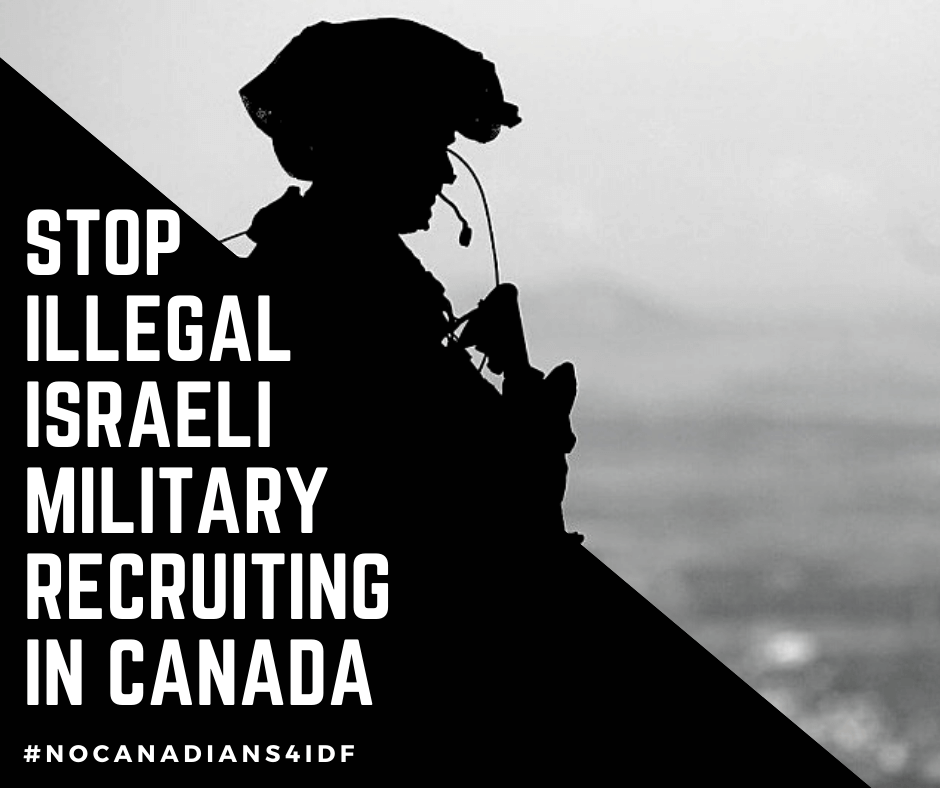 Take one minute to write to RCMP Commissioner Brenda Lucki to remind her it is over a year since information was provided to her office.

Let her know we continue to insist on a thorough investigation in regard to illegal Israeli military recruiting occurring in Canada.

In November 2020, the RCMP indicated they were investigating Israeli military recruitment taking place in Canada.

On January 3, 2021, evidence was provided to the RCMP regarding illegal Israeli military recruitment in Canada.

Le Devoir reported in October 2020 that it is a crime in Canada to recruit anyone for a foreign military.

Read more including the complaint provided to Minister Lametti, as well as media coverage.

Watch the webinar from January 2021.

Check out some of the media coverage over the last 15 months regarding illegal Israeli military recruiting in Canada.

Check out organizations that have endorsed.

We send this letter as the RCMP are arriving in Wet’suwet’en Territory in response to the reoccupation of Coyote Camp.

Word from the Unist’ot’en Solidarity Brigade is that:

For the fourth time in four years, there is information that dozens of militarized RCMP are en route to Wet’suwet’en territory, to facilitate construction of the Coastal GasLink pipeline and to steal our unceded lands at gunpoint.

RCMP have booked up local hotels for the next month. We have also received word from the Union of BC Indian Chiefs that the C-IRG unit of the RCMP – the paramilitary unit that protects private industries who are seeking to destroy Indigenous lands – are being deployed onto our lands.

We stand in solidarity with the Wet’suwet’en, and indicate this in the template letter.