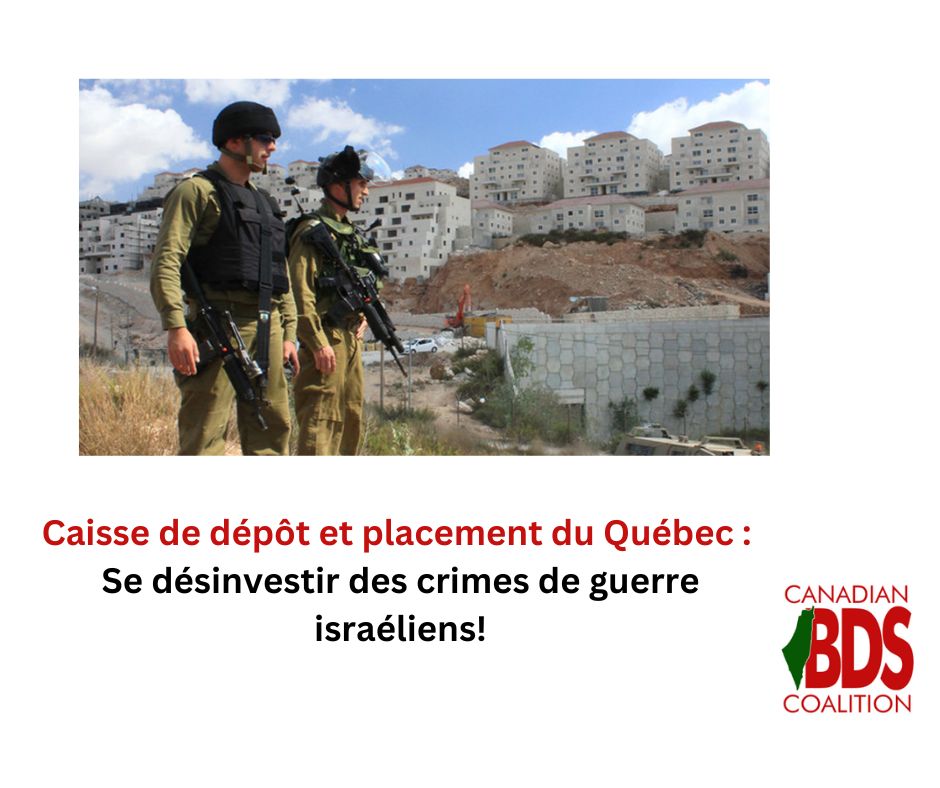 The UN Database was released on February 12, 2020 in the Report of the United Nations High Commissioner for Human Rights (A/HRC/43/71) after the independent international fact-finding mission to investigate the implications of the Israeli settlements on the civil, political, economic, social and cultural rights of the Palestinian people throughout the oPt, including East Jerusalem. There are a total of 112 companies included on the UN list.  Based on CDPQ 2020 Annual Report of equity holding, the CDQP is invested in at least a dozen companies that are listed in the United Nations database.

UN Security Council resolution 2334 (2016) reaffirmed that settlements have no legal validity and constitute a flagrant violation under international law.

Violations by Code (codes are by each company)

In resolution 31/36, the Council defined the database by reference to the listed activities compiled by the fact-finding mission in its report, which were:

A The supply of equipment and materials facilitating the construction and the expansion of settlements and the wall, and associated infrastructures;

B  The supply of surveillance and identification equipment for settlements, the wall and checkpoints directly linked with settlements;

C  The supply of equipment for the demolition of housing and property, the destruction of agricultural farms, greenhouses, olive groves and crops;

D  The supply of security services, equipment and materials to enterprises operating in settlements;

E  The provision of services and utilities supporting the maintenance and existence of settlements, including transport;

F Banking and financial operations helping to develop, expand or maintain settlements and their activities, including loans for housing and the development of businesses;

G The use of natural resources, in particular water and land, for business purposes;

H Pollution, and the dumping of waste in or its transfer to Palestinian villages;

I Captivity of the Palestinian financial and economic markets, as well as practices that disadvantage Palestinian enterprises, including through restrictions on movement, administrative and legal constraints;

J Use of benefits and reinvestments of enterprises owned totally or partially by settlers for developing, expanding and maintaining the settlements.

Alarming! CDPQ is reported to own 80% of Allied Universal

CDPQ reports holding over $1.5 billion* in Allied Universal Holdco LLC but does not report the actual amount.

Also, CDPQ holds between $10-30 million*, Allied Universal Manager LLC but does not give actual figure.

In April 2021, Allied Universal, a leading security and facility services company in North America, announced the acquisition of G4S.

Caisse de dépôt et placement du Québec (“CDPQ”) in February 2019 announced a huge investment in Allied Universal (the “Company”) noting that this is the leading security services provider in North America, and indicated the transactions values Allied Universal at more than US$7 billion.

According to AFSC Investigate

G4S is involved in the operations of the Israeli National Police Academy, which consolidated all of Israel’s police training facilities and trains all units of the Israeli Police, as well as other security forces and private security companies. The Israeli Police is in charge of enforcing Israel’s military law in the occupied West Bank and providing security for Israel’s illegal West Bank settlements. In addition, the Border Police branch is regularly deployed in the occupied Palestinian territories, where it is under military command.

The National Police Academy is owned and operated by Policity, a consortium of companies that was created for the purpose of this project. Policity is owned by Israeli infrastructure company Shikun & Binui (50 percent), Israeli security company G1 Secure Solutions (25 percent), and G4S (25 percent). Policity formed in 2010 as a joint venture between G4S and Shikun & Binui for the purpose of bidding on the National Police Academy. The facility opened in 2015, with G4S and Shikun & Binui each owning a 50 percent stake. In 2017, after G4S sold its Israeli subsidiary (see below), its stake in Policity was reduced to 25 percent. Policity has the contract to operate the Academy at least until 2035.

Beyond this, CDQP is invested in an additional over $10 billion in Israeli war crimes

The AFSC Investigate report indicates the following companies, beyond those listed in the UN Database are complicit with Israeli war crimes associated with occupation.

See details of these companies at

Campaigns through the Canadian BDS Coalition related to these companies include

CDPQ 2020 investments in companies listed by the UN as complicit with Israeli war crimes include:

*the links are from Who Profits where available, or if not, AFSC Investigate

WSP Global, is a Canadian management and consulting firm that specializes in engineering projects. WSP according to Who Profits, is involved in the planning of the Israel railway system that crosses into the occupied West Bank and constitutes settlement infrastructure. With over $2.5 B of investment in WSP Global, CDPQ is very heavily invested in this Canadian firm. A firm involved in illegal settlement activities.

We remind the CDPQ of the large divestments from public pensions in New Zealand and Norway in 2021.

Norway’s $1.3 trillion sovereign wealth fund excluded Shapir Engineering and Industry Ltd and Mivne Real Estate KD Ltd. for their activities associated with Israeli settlements on the West Bank. The companies were excluded based on advice from the Council on Ethics “due to unacceptable risk that the companies contribute to systematic violations of individuals’ rights in situations or war or conflict,” the fund said in a statement.

We ask has the CDPQ conducted similar analysis of investments of their portfolios?

In this regard CDPQ needs also to divest from other firms complicit in Israeli war crimes:

Caisse de dépôt et placement du Québec is an institutional investor that manages several public and parapublic pension plans and insurance programs in Quebec. CDPQ was founded in 1965 by an act of the National Assembly.

CDPQ at a Glance

CDPQ indicates their “Calling for responsible governance practices” and their priority areas: • Use ESG analyses across our investment activities • Anticipate cybersecurity issues • Counter abusive use of tax planning.

The CDPQ indicates it “Foster equity, diversity and inclusion at all levels.”

CDPQ commits to: Effective risk management is crucial to our investment activities and an integral part of our portfolio management and business processes. CDPQ says that over the years, they have developed rigorous processes, strong and sustained governance, and effective measurement tools.

In “Bad” company with the Canadian Public Pension Investment Board (CPPIB)

On March 8, 2021, over 70 organizations along with dozens of individuals contacted the Canadian Pension Plan Investment Board about its investment in funds related to Israeli occupation of Palestine and the Syrian Golan Heights.

See statement in English and French

The 2021 CPPIB Annual Report indicated increased investments in Israeli war crimes with at least 10 companies identified by the UN as complicit in war crimes.

While the CPPIB indicated it was initiating a review in March 2021, no response has been received to the thousands of letters over 2021.

During 2021 over 5,000 letters were sent to the CPPIB and the Minister of Finance.

-WSP which has been submitted by NGOs for consideration for the UN data base.

3. Put in place a transparent process to ensure that companies are vetted for violations of human rights and international law.

The concerns that we raise are also in the broader context of ethical investment related to Quebec’s public fund investment including in mining, fossil fuels, private health care, and other issues of justice and humanitarian concern.

We ask the CDPQ to take all steps necessary to ensure that the activities of all companies included in all of its portfolio are in compliance with international law governing war crimes. We remind CDPQ that in Canada, parties that are complicit in war crimes are liable to criminal prosecution under the Crimes Against Humanity and War Crimes Act,[1] including corporations.[2]