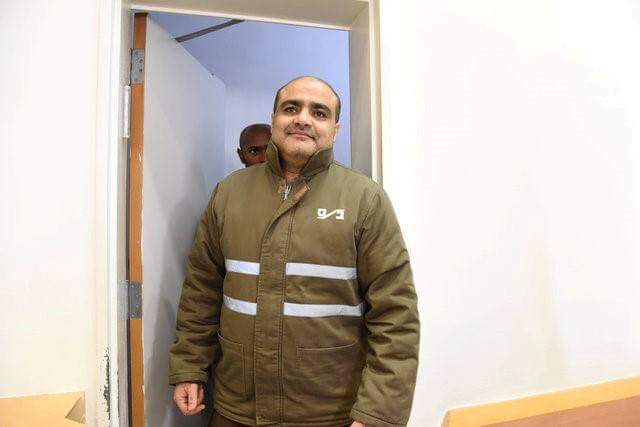 Muhammad El Halabi, former Director of World Vision International in Gaza, has been incarcerated for six years. Israel accused him of channeling millions of dollars in development aid and materials to Hamas. Following over one-hundred and sixty hearings, Israel has failed to provide any public evidence against Habali, but the judge and the prosecution have kept the trial going, with interminable delays and extensions, while he languishes in detention.

Just Peace Advocates and others joined together in campaigns, actions, and letter writing to Canadian Members of Parliament. FOSNA (Friends of Sabeel North America) have initiated a campaign calling for Halabi’s release, pointing out that multiple independent audits have shown that no money was missing from World Vision and that no funds could have been diverted. According to Halabi’s lawyer, Maher Hanna, the secrecy and restrictions surrounding the trial are only intended to hide the shallowness of the case and protect the government from embarrassment, rather than for any legitimate security needs.

On Tuesday this week, there was a tumultuous scene at the 24th extension hearing before the Israeli Supreme Court, with a large group of diplomats as well as Jewish protestors attending. Someone raised a Palestinian flag within the courtroom and another yelled in Hebrew to free Halabi.

The Supreme Court judge was clearly frustrated and felt noticeably uncomfortable extending Halabi’s detention yet again in the presence of that whole crowd of observers. He issued an order for the magistrate court judge to inform him in writing within three days when his decision in the Halabi case would be issued.

The Magistrate Court judge yesterday replied that the decision would be announced on June 16th. Finally, after six long years that Halabi has spent in detention, without conviction, the trial will be over, and we can see light (or at least certainty!) at the end of the tunnel. It would be curious to see if Halabi will be released or what justifications the judge will use to convict him.

We still do not know what the decision will be, and we know that it is very rare for Israeli courts to issue exonerations in security cases, particularly after they publicly smeared Halabi and World Vision as terrorists. Yet, we will finally see a decision and the judge will have to make a ruling.

We will keep you posted as to the decision once it has been made.

Over six months ago, Israel designated six human rights and civil society organizations as “terrorist organizations” on the basis of spurious secret evidence. FOSNA, together with many others, challenged this decision and demanded that Israel provide public information behind its accusations and, lacking that, rescind the designation. Dozens of organizations have joined the call, thousands of letters have been sent to Canadian politicians, and also signed the Parliamentary petition sponsored by Liberal MP Erskine-Smith. In the USA, Friends of Sabeel have asked US congresspersons, as well as the US State Department, to take up the matter with the Israeli authorities.

In a call this week with Sha’wan Jabarin, Executive Director of Al-Haq, one of the six falsely accused organizations, we learnt of the following new developments:

In short, thanks to the activism of many, Israel is being pressed either to justify this designation or refrain from taking any action against the six organizations or even from expanding the list to include many additional civil society organizations on its radar. This reluctance by Israel is entirely thanks to the impact of transnational solidarity and vigilant eyes of the international community.

Those of us who work for justice for Palestine often find ourselves discouraged, questioning whether our advocacy efforts have any effect, or whether we are merely a “voice crying in the wilderness.” These recent developments show that our activities can and do have a positive impact and provide a real restraint on the actions of Israel. By drawing public attention to the injustices, demanding action by our government officials, and refusing to accept spurious “secret evidence” to justify Israel’s actions, we can in-fact make an impact.

Even when we fail to accomplish our ultimate goals (in this case, freedom for Halabi or the reversal of the terrorist designation against The Six) we can at least make a bold statement, expose the façade of lies, and force Israel to pay a political and moral price for its actions. At the very least, it will be less likely to lay claim to the support of people of goodwill or claim that its apartheid regime has any legitimacy beyond that which has been obtained by brute force and intimidation.

As we commemorate this week the 74th anniversary of the Nakba, the planned ethnic-cleansing of indigenous Palestinians from their homes and properties to make way for European settlers, as we recognize the sad truth that forced population transfer remains an ongoing reality for Palestinians to this day, and as we mourn the tragic loss of murdered Palestinian-American journalist Shireen Abu Akleh of Bethlehem, let us find hope in small victories and stand firm in the knowledge that truth and justice will ultimately prevail.