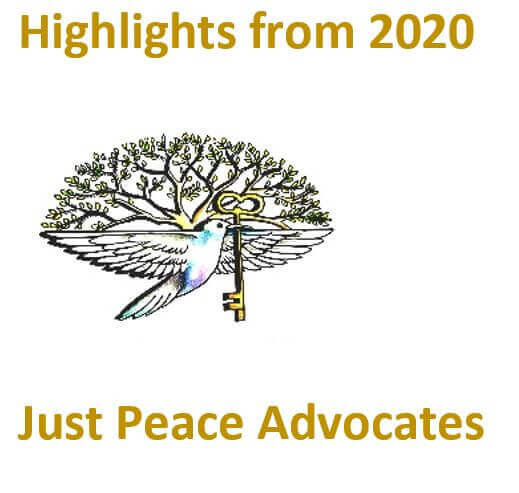 In September 2020, the first comprehensive, accessible legal and tactical guide for human rights supporters of Palestine in Canada was launched.

A defeat for Canada is a victory for Palestine. On June 17, 2020 Canada lost its bid for a United Nations Security Council (UNSC) seat, for the second successive time. This followed an active campaign to expose Canada’s stance on foreign policy issues including with regards to Palestine.

Check out  endorsement by Roger Waters

Analysis of Canada’s voting at the UN from 1947 onwards

Just Peace Advocates has also been proactive in legally based work in support of possible violations of international law by Canadian companies.

For example, several letters have been written by a lawyer retained by Just Peace Advocates to Canadian companies complicit in military occupation and illegal settlement, as well as Canadian companies that may have relation to Israel Electric. Read more.

Over 1K engaged during the first ever Canadian foreign policy event “Canada’s Silence on India’s Colonization of Kashmir” on October 22.

Toronto Star, During my Christmas in Kashmir, stories of survival, resistance, and pain

Hill Times, Canada has a duty to respond to human rights situation in Kashmir

75 groups signed the Just Peace Advocates Canadian Gaza 2020 call for sanctions by Canada against Israel, based on international law (Article 1 for Fourth Geneva Convention) and domestic law (the Special Economics Measures Act) until not only the blockade on Gaza is lifted, but until the occupation ends, equal rights are in place in historic Palestine and the right of return is realized.

700+ letters  in conjunction with Palestine House, calling elected member of the Ontario legislature to not support Bill 168.

Jerusalem: Working for the Palestinian Rights of those in Al Quds

The campaign was led by Just Peace Advocates, the Canadian Foreign Policy Institute and Palestinians and Jewish Unity.

In response, on October 21, Lametti said the issue would be referred to the authorities: the police and Public Prosecutor for investigation.

On November 3, 2020, evidence was provided directly to the RCMP

The Canadian Foreign Enlistment Act, 11 (1) states, “Any person who, within Canada, recruits or otherwise induces any person or body of persons to enlist or to accept any commission or engagement in the armed forces of any foreign state or other armed forces operating in that state is guilty of an offence.” The only exception would be the recruitment of Israeli citizens who are not Canadian.

Check out some media coverage including front page of Le Devoir. #NoCanadians4IDF

Release of Jonathan Kuttab’s “Beyond the Two State Solution”

Just Peace Advocates is fortunate to have Jonathan as one of its co-founders and current board member.

Jonathan Kuttab’s decades of legal service and creative activism has led him to write this important book.

Get your copy and let us know what you think.

During 2020, Just Peace Advocates put a focus on media accountability, including monitoring and proactive response, as well as providing opinion editorials, press releases and media coverage.

A key focus was Canada’s public broadcaster, the CBC

Globe and Mail and the Toronto Star treated the University of Toronto Law withdrawal of an offer of employment to human rights scholar Dr Valentina Azarova as an isolated scandal of procedural interference, obscuring the broader and escalating climate of silencing regarding Palestine of which this is just one manifestation.

600+ letters were sent to the Globe and Mail, and the Toronto Star saying this is not just an isolated scandal, and that this is part of the campaign related to silencing on Palestine.

Regular monitoring to hold the Canadian media accountable for accurate coverage related to Palestine. Please check in for analysis and steps you can take to respond when inaccurate and shoddy reporting happens.

During the year coverage of work by Just Peace Advocates was included in Canadian and international media such as Le Devoir, Radio-Canada, the Hill Times, the Star, Al Jazeera, Arab News, Electronic Intifada, Indus, Palestine TV and others. This included reports and published articles and interviews. Over 30 op-ed were published in a variety of media such as the Toronto Star, Canadian Dimension, rabble.ca, Mondoweiss, Ricochet, Canada Files, Spring Magazine and others.

Over 2 million letters sent since April 2020

Just Peace Advocates hosted 30+ letter writing campaigns from April to December 2020, that reached well over 2M recipients, with 12.5+K letters sent. Several of these were with partners.

Over 30 separate letters have been sent, including to the federal government, Ontario government, political parties, the RCMP, the CBC and other media, and to United Nations Ambassadors. See the letters HERE

You can review past newsletters

Just Peace Advocates is a registered not-for-profit corporation in Canada. We are not applying for charitable status as we believe our work for justice should not be compromised.

Donations to Just Peace Advocates allows for the core legal, advisory, policy, and programs in support of a civil society voice focused on government, institutional and society’s accountability to the rule of law, and the standards of international human rights and humanitarian law.